Louisiana-born and Alabama-raised, artist and interior designer William McLure doesn’t remember a time when he wasn’t creating. As one of four boys growing up in the tiny town of Troy, finding outlets for his passion took a bit of resourcefulness. As a kid, he could often be found rearranging furniture, repainting his bedroom walls, and DIYing canopy beds by nailing sheets to the ceiling. For birthdays, it wasn’t bikes or action figures he asked for, but lamps and duvet covers. Though McLure excelled in high school art class and painted throughout his upbringing, he never imagined he would make a living through art. After graduating, college wasn’t in the cards, so he got a job at the Alabama Board of Heating and Air Conditioning Contractors.

Today, McLure is a successful artist and interior designer, whose paintings and design commissions can be found across the country. We sat down with him to hear more about how he took the leap to art and design, and how his business is doing almost five years in. 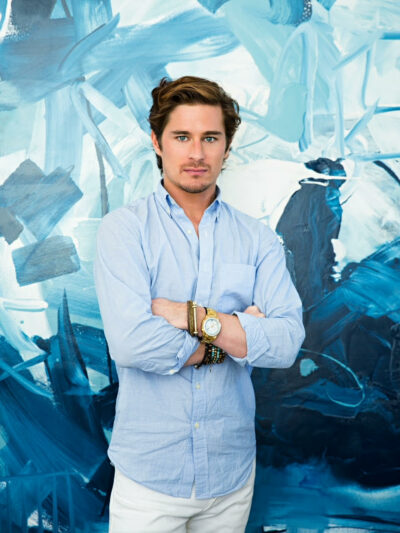 So, you started your career in heating and air conditioning. How did you make the transition to becoming a full-time artist and interior designer?

For seven years, that’s what I did. Finally, I was like I can’t do this for the rest of my life. I started taking night classes in Birmingham because my job was in Montgomery. I traveled every night after work to take classes at the Southern Institute of Design. Halfway through getting my bachelor’s degree, I messaged Bill Ingram Architect to see if he needed any help. I said, “I’ll take out the trash. I don’t care,” and he hired me. I worked for him for six years as the interior designer for the firm. About four and a half years ago, I started posting pictures of my interiors on Instagram. Then, I started posting pictures of my paintings, and in about five months I developed a commission list. I would come home and paint at night and paint on the weekends. In five months, I made more than my annual salary as an interior designer. So, I said I need to see what this is about. I quit my job and was incredibly scared, but it’s been amazing ever since. I was very lucky for my art to be received as well as it was. It’s been an amazing road. I’m very lucky to do what I do and love what I do every day.

How do the two halves of what you do intersect?

Growing up, art came first then interior design, and then those two switched. Then, it was interior design and art was the backdrop. When you do a room, it’s not just one thing that sets the tone for the room. It’s kind of a puzzle piece of things that go together that create this feeling or vibe within the room. Art is really good at achieving that. Art is number two on the list of things that dictate the style of the room. Number one is color—color is so powerful. But art can be easily as powerful as that. An old oil landscape is going to pull a room in a totally traditional way and vibe, but a modern piece of art is going to pull it kind of eclectic and modern. So, the two work hand in hand.

How would you describe the style of your art and design to others?

The world is such a visual place that I don’t really have to describe it. If I had to give it some words, I’d say large-scale, abstract, modern. I don’t pigeonhole myself to one style. Yesterday I was working on a portrait of a person. It’s not necessarily just objects and modern. My mind is always moving and shaking, so that’s kind of where that passion for creating comes from. Also, I don’t take anything too seriously. If something doesn’t work out, I just paint over it, start over, or throw it away.

For interiors, the building or space that I’m in dictates that. The warehouse [that my studio is in] downtown is 11,000 square feet, so it has more of a modern, clean vibe to it. Whereas my residence is on a farm out in the country, so that’s more of an older home that’s Southern and has more of a traditional vibe.

What are your thoughts on the creative community in Alabama? How do you fit into that community?

Alabama, specifically Birmingham [where my studio is] is really great and lucky to have so many talented architects and interior designers that all get along and work hand in hand with each other. We have great schools like Auburn that are pouring out all these great architects and interior designers. We’re really lucky that everyone gets along, and there’s enough work out there that supports everyone. You don’t always see that in communities. I moved out to the country to have some privacy, so I’ve kind of been like a hermit since COVID. I just come into town work in my warehouse and then go back to the farm. I’m just busy taking care of 200 animals and renovating a house.

Locally, McLure’s visual art can be found at Circe in Mountain Brook, as well as at his 3rd Avenue Downtown Birmingham studio by appointment. Art and interior design commissions can be made at williammclure.com.