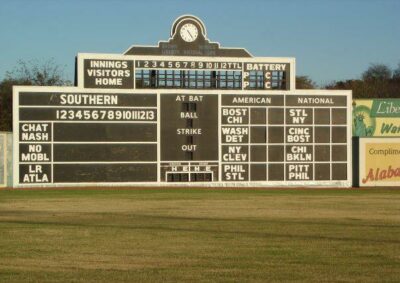 When summertime rolls around, it’s all about America’s pastime. In Birmingham, most associate baseball season with Regions Field, the downtown home field of minor league team the Birmingham Barons. However, just a few miles down the road is another baseball park with more than a century of history as Birmingham’s baseball hub. Built in 1910, Rickwood Field is a huge part of the city’s history and remains an active part of the community today. Here are 5 things you didn’t know about Birmingham’s Rickwood Field.

In 1909, Birmingham businessman and industrialist Rick Woodward bought the Birmingham Coal Baron baseball team and immediately began dreaming up a new home field for the team. In 1910, he opened Rickwood Field in the West End neighborhood of Birmingham. The new ballpark was modeled after Forbes Field in Pittsburg and Shibe Park in Philadelphia. On opening day August 18, 1910, the entire city was closed for business in honor of the park.

It was the home field of two separate Birmingham teams.

More than 100 Hall of Famers have played at Rickwood.

Over the past 112 years, Rickwood Field has hosted thousands upon thousands of games, seeing thousands of 7th Inning Stretches and more boxes of Cracker Jacks than you could probably count. In that time, more than 100 Hall of Famers have run the iconic field’s bases and stepped atop its pitcher’s mound. Baseball legends Babe Ruth, Ty Cobb, Satche Paige, and Willie Mays are all among Rickwood’s long list of famous alum. 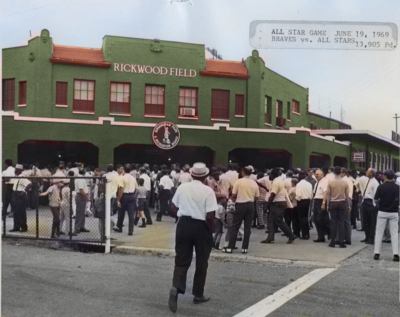 The field is still in use today.

While the Barons may have moved to a modern ballpark just down the road, that doesn’t mean Rickwood has been left to the wayside. The field has been managed by nonprofit Friends of Rickwood since 1992. Rickwood still hosts frequent amateur, local, college, and semi-pro teams ever year. It also remains the location for the Rickwood Classic, a ceremonial throwback game played between the Birmingham Barons and another minor league team to celebrate Barons teams of the past as well as the historic field. The game became a tradition in 1996, and baseball fans have been delighted by the period uniforms and other blasts from the past ever since.

Rickwood has starred on the silver screen several times.

The Magic City’s local gem has caught the attention of Hollywood producers several times over. Scenes from the 1994 movie “Cobb”, a biographical film starring Tommy Lee Jones as baseball legend Ty Cobb, were filmed at Rickwood. In 1995, the historic venue showed up again “Soul of the Game.” More recently in 2012, scenes from the movie “42″ about Jackie Robinson’s life and baseball career, were filmed at Rickwood.