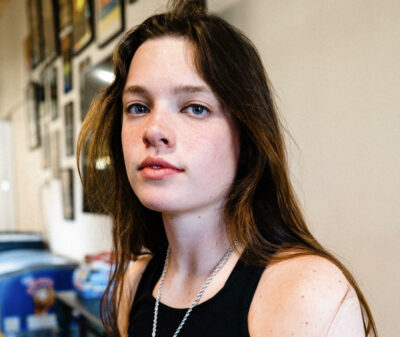 Lilly Hart’s junior year of high school was supposed to be the busiest time of her life. During the spring of 2020, the high schooler from Lilburn, Georgia was set to travel to several cities as part of her school’s basketball team, play in the golf state championship, and finish the year with a 4.0 GPA. All that changed when March rolled around, and COVID-19 turned everything upside down. Never one to sit still, Hart immediately pivoted and began exploring another passion of hers: music. “I had written before but this time I took it seriously,” she says. “I started to set goals and one of those goals was to release a song on all platforms. It was a hard process to navigate but I ended up reaching that goal when ‘Love is Addiction’ came out in the fall of 2020. After I released one, I kept writing and setting goals.”

Almost two years later, Hart has set and reached many more of those goals. Now 18 and a freshman at Birmingham Southern College, the alternative artist already released an EP, had her songs played on the radio, and continues to add to her busy schedule of college basketball and courses with several live performances in her new home of the Magic City. We sat down with Hart to hear more about where her passion for music comes from, what inspires her songs, and what we can expect from her next.

When did you first start singing and playing instruments?

At 5 years old, my mom put me in piano lessons. I kept playing the piano and then picked up the guitar at age 12.When I picked up guitar, I started to learn songs that I could sing and play at the same time. Every time my family got together, I would put on little shows for them. I also played the viola in middle school and high school. While playing in the orchestra in high school, I learned a little bit about music theory. This allowed me to start taking my musical writing seriously. When I started producing the songs I had written, I put all my knowledge about musical instruments together so I was able to play all the instruments and sing in the songs.

Where does your passion for music come from and what do you like about singing and performing?

My passion for music was something I was born with. My family is very musical so it helped me explore my passion. I was lucky to be born with the talent to hear music by ear. Basically, this means I can hear a melody and play it on the piano or try and guess what comes next. This made it easier to explore my passion in music. I have been writing my whole life and performing in front of my family since I was 7. I was always nervous right before, but I loved the adrenaline rush and I loved being in the spotlight. I have never been the kid to demand attention, but I did think it was cool how my singing would make anyone there stop and listen. My passion for music has always been hidden by my passion for basketball. It wasn’t until recently I realized this is something that I really wanted to do.

Where does the inspiration for your music and lyrics come from?

Whenever I write, it’s because something has inspired me to do so. I never block off time for writing because the ideas come naturally when they want to. As far as the instrumentals go, a melody will usually come to me either on the guitar, piano, or synth, and then I will just build off of that. I usually write the instrumentals then write the lyrics. As far as the lyrics go, I either write about a personal experience or I write a story. I’ve always loved to tell stories, so I thought it was important I include them in my songs. For example, “Talk to Me” is a detailed story about a couple’s first fight. None of the situations actually happened to me in that song, but I have been in a fight before so the emotions were real. I usually don’t like telling listeners what I think the song is about even though I wrote each of them for a very specific reason. I like to leave the lyrics up for interpretation because then the listeners can connect for a personal reason.

How would you describe your sound? What genres are you most interested in?

I don’t think there is one specific word to describe my sound. I think all of my songs sound different, but my voice connects them. On Apple Music, my music is described as alternative. Essentially alternative is music that doesn’t fit in one genre, so I feel like that genre does describe me. I love exploring new genres, and I plan on exploring most genres with my music in the future.

Tell us how you felt when you heard your song played on the radio for the first time?

Scott Register’s [of Birmingham Mountain Radio] son was in my class in January, so he introduced me. Reg listened to my music and loved it and then told me he was going to play it on his Sunday show. I felt truly blessed that someone that important in the industry believed in my music. January 23rd was the day I was on the radio for the first time. I actually had a basketball game that day at 1 p.m., so I was really hoping he would play me in the morning. My two best friends were in the car with me, and we were going to Urban Cookhouse when we heard Reg start to talk about me. We all got so excited and when my song started playing it was a surreal experience. I think it’s always a dream come true when any artist hears their song on the radio. For me personally it was really cool as an artist to hear my product be shared with all of Birmingham. It is an experience I will never forget and never take for granted.

What can we expect from you next?

I currently have a lot of unreleased songs and am planning on releasing some music soon. I am carefully deciding what I want to release and when I want to release it so I can get the most listeners. As far as shows, I am playing May 15 at 3 p.m. at Cheap Chick Trading Co. which is a thrift shop. I am very excited, and I hope the people of Birmingham will enjoy!

You can find Hart’s music on Apple Music, Spotify, and Soundcloud.