A realtor’s perspective on what’s causing the “Fairhope Fever” 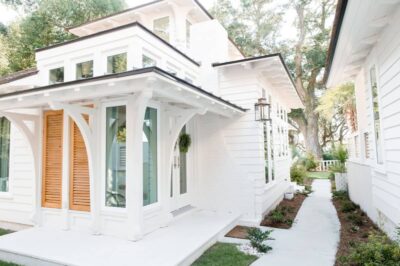 Hidden between the frosty-white beaches of the Gulf and the anchorage of the USS Alabama, there is Fairhope. A nested gem of a time since passed, Fairhope serves as a haven of leisure that calls to annual vacationers again and again. So, what is it about this majestic small city that beckons so loudly? April McCraney, a real estate agent in the area, knows first the power of ‘Fairhope Fever,’ and why it’s increasingly vital to ensure the town’s longevity.

“It’s so…quaint,” McCraney says. “There’s so much history here, and you can see it in the structure of the city. It has this old world feel that just brings you to peace.”

Moving to the area in 2018 with her husband, she says the city of less than 25,000 has stolen her eye and heart with its treasure trove of preservable architectural masterpieces. The assumption to be made about a seller in such a lucrative market is one of relentless enthusiasm, bursting at the seams over the ease of plotting families into new abodes. However, McCraney—an admirer of the city’s history first, and a home-scalper second—tells of an underlying fear of losing what makes that history tangible as a result of such an avalanche of interest.

“There’s a mix of old and new in the landscape. As an agent, there’s always something to be on the lookout for because everyone wants to live in Fairhope,” she says.

To her, the conservation about preserving the beforetime is a sticking point. McCraney goes on to explain that, in a post-pandemic world, the market for new homeowners and builders has exploded. With this progression comes a delight for businesses, indulging in the boom of new faces and pockets. Underneath, McCraney says, lies a danger. “Some of the new things are great, but they come at the cost of tearing down the beauty that helped shape this city for so many generations.”

Like much of the southern United States, Fairhope is undergoing a bit of a redesign. While not as rapid and fast-paced as Atlanta or Austin, the city has seen massive growth in the last couple of years. This bodes well for the continual notoriety of the beautiful city, but the cost-benefit of such a facelift causes concern, even from those who make a living selling the ‘big new place’ to the growing township. In 2018, the Grand Hotel, a staple in the city, completed a $35 million renovation plan. While this in itself was seen as a much-needed triumph for the city by most, the precedent for a modernized Fairhope has been set, leaving residents like McCraney hoping to preserve the city’s quaint, quiet charm for as long as possible.

“The natural beauty is what drew us in,” she says. “There are houses being snatched up on a weekly basis—the market is hot. My hope is that these places are being purchased to preserve, not bought to replace.”