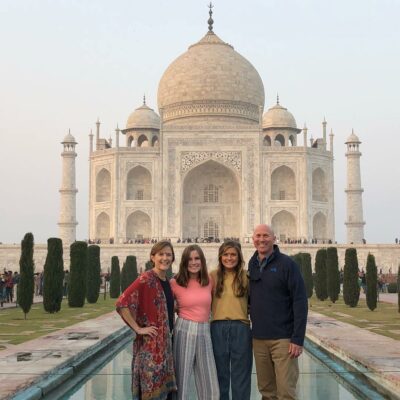 When Delaney and Riley McIntyre were in elementary school, their parents Kellie and Dale set a goal for the family: to visit every continent except Antarctica by the time the girls graduated high school. The adventurous family figured they’d accomplish their goal during winter and summer breaks, but all that changed when they encountered a family just like theirs while on a three-week trip to Southeast Asia when Delaney and Riley were in 5th and 6th grade.

“They were carrying identical backpacks, except they were traveling for a year,” Kellie McIntyre says. “We returned home and kept talking about traveling long term, but life got in the way, and so all we did was dream, not plan. There’s a big difference. A few months later, our pastor preached a sermon about not living a life of ‘accumulating regrets.’ In that moment, Dale and I looked at each other and made a decision to do something big. Twelve months later we took off on the big trip.”

That trip turned into a five-month adventure through 12 countries across four continents, where the family of four did everything from paragliding over the Swiss Alps and bungee jumping in New Zealand to hiking Peru’s Inca Trail and dancing with the long-neck women of Myanmar.

At the time of the trip, Delaney and Riley were 14 and 12 years old. Now, at 22 and 20, Kellie says it’s still the greatest thing her family has ever done. Travel, she says, has opened a whole new world for her and her family. 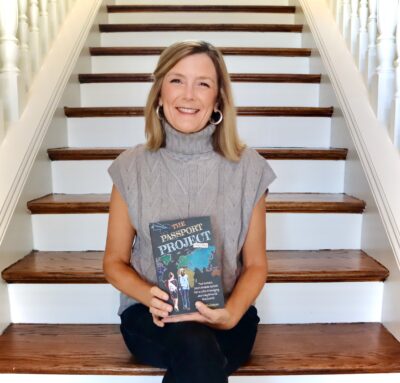 Kellie with her book (The Passport Project/Contributed)

“At home, we are all at the center of our universes,” she says. “But when traveling, you realize what a small piece of the puzzle you are, but it takes all the pieces to make a beautiful world. Think about how boring a puzzle would be if all the pieces were the same. Travel reveals important life lessons that cannot be learned in a classroom or by reading a book.”

After the epic journey, the McIntyres shared their travel stories through their family blog called 4 Worn Passports. McIntyre said though people often suggested she write a book, she never seriously considered taking on the challenged. All that changed when the pandemic hit in 2020.

“I was a brand-new empty nester, and I was trapped at home classified as ‘non-essential,’” she remembers. “People were so divided and scared, I just wanted to create something that would unify rather than divide. I also knew that I had an essential story to tell about the life lessons learned through travel.”

She started researching travel memoirs and listening to podcasts about writing. What she found was a huge gap in travel books written specifically for teens or tweens. With that new knowledge, she had the perfect formula for her book. She’d write her book from the perspective of her middle school-age daughters.

“Kids are curious about the world, and what better way for them to learn about different cultures and customs than through the real experiences of other kids,” McIntyre says. “Besides, anything written from a middle schooler’s perspective is bound to be entertaining.

McIntyre finished her first draft of the book, called “The Passport Project,” in about three months, then spent another year having it edited. She says she knew she was onto something after her eldest daughter Delaney read a draft and said she nailed the anxiety, awkwardness, and uncertainty of her middle school years.

And despite Delaney’s initial reluctance to go on the trip as an 8th grader, she couldn’t be more thankful for the experience today.

“The Passport Project” is available in paperback at Barnes and Noble, Books-A-Million, and wherever books are sold. It is also available for purchase as an e-book. Click here to order it on Amazon.