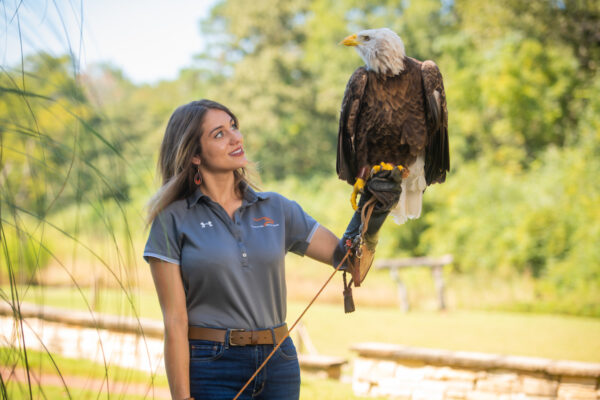 As the sun begins to set over Lake Guntersville, a bald eagle bullet dives into the water, emerging with a wriggling fish. It heads back towards the ridge, where a nest awaits with a mate overseeing a couple of chicks. On a dock astride the lake, a group watches as the eagles fly in for dinner time. There is something exhilarating about a white head and tail feathers flying overhead. Watching it fish for its young against the orange and red sunset transforms it to mythical status.

Every winter, Lake Guntersville State Park hosts Eagle Awareness Weekends: January 21-22 and 27-29 and February 2-5 in 2023. The park is home to 20 nesting pairs who enjoy Alabama weather year-round. An additional 20 migrate from Canada for our more agreeable climate. The weekends are packed with guided field trips and live bird shows.

Every Saturday at 2 p.m. there will be a live animal show with a bald eagle. Each weekend will feature experts that will hold live bald eagles in their hands for you to see up close. Experts include Wings to Soar, Auburn University, and Tennessee State Park raptor expert David Haggard. Auburn spices up their show with a War Eagle – a golden eagle which is more common in the plains. Auburn’s show takes place on February 4th. These shows also include a variety of other raptors such as owls and hawks.

During your visit, catch the other raptor shows on Saturday evening at 5:30 p.m. and Sunday morning at 11:30 am. Rise Raptor brings one of the most beautiful raptors, a kestrel, and their Native American executive director focuses on our relationship with the world’s most powerful birds. Raptor Ridge emphasizes the importance of raptors in our ecosystem and includes a vulture in their show. The Alabama Wildlife Center brings a variety of rescued birds and explains their behavior and biology. 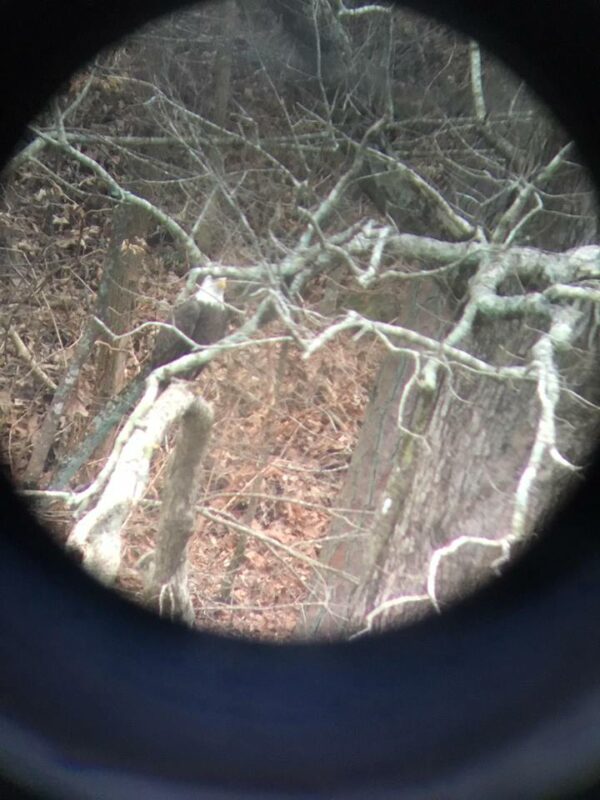 An eagle through a scope lens (Photo courtesy of Mike Ezell)

Too often, eagles and other birds have collisions with human life such as cars or even other animals, making them unable to return to the wild. The education birds in the live shows are rescues that now serve as ambassadors for raptors and wildlife.

Guntersville is the place to see wild eagles. With fish constituting a favorite food, these birds prefer to nest along rivers and lakes, especially the along the Tennessee River and Wheeler, Pickwick and Guntersville Lakes. It is estimated that bald eagles now live in every county in Alabama.

“Our goal is for everyone to see a bald eagle in the wild. Most do,” says retired Lake Guntersville State Park Naturalist Mike Ezell, who led the Eagle Awareness Weekends for many years.

Eagles are easy to see for a couple of reasons—one is their size, two is that they nest close proximity to water. The field trips are accessible to everyone. One of the nests on the guided tour sits in a public city park, right on the river, and below a sidewalk. Looking high up, the giant nest is shaped like a wine glass without the stem. While it is hard to see the fledglings, an alert adult eagle is watching warily. It is easily seen with the naked eye. Another trip takes you to the dock, where a good parking lot and pier make sightings convenient to spot. Lake Guntersville Dam is also a good viewing station.

Creatures of habit, eagles return to their nests, making it easy to plan a field trip. Eagles build the largest nests of any bird. Some have been measured as 12-feet in circumference and weigh as much as 2,000 pounds; the largest recorded weighed three tons and was 20-feet deep. It takes a tall, sturdy tree to host a breeding pair, who may spend up to three months building or adding-on each year as if they are social climbers needing more entertainment space.

Eagles mate for life and enjoy a more egalitarian family life than most other creatures, so the bird you see on the nest could be male or female. The male will sit on the eggs, giving the female a rest. Considered good parents, they tear off strips of meat to give to their babies. They stuff their babies like every day is Thanksgiving, resulting in rapid growth. The eaglets may not move out on their own until six to eight months after hatching.

You may see some chicks or juvenile birds. It is easy to mistake them with golden eagles as it takes about five years for the white feathers to grow on the head, wings and tail. The word “bald” comes from an old English word, “balde,” which meant white.

As much as Americans love their national bird, we were down to less than 500 mating pairs in 1963 in the lower 48 states. With the ban on DDT and aggressive restoration programs, there are now more than 300,000 nationwide.

To see America’s bald eagle success story, you can join in the Eagle Awareness Weekends. The programs are free and open to the public. You can come for the day, or choose a weekend package at the Lake Guntersville lodge, in a chalet or in the campground. The packages include lodging, two breakfasts, and one dinner, a welcome packet, VIP access to presentations, discounts at the restaurant and gift shop, photo opportunities with birds of prey, activities for children, engagement with featured sponsors and one-on-one access with the naturalists. As a bonus, you get to enjoy seeing one of nature’s most spectacular creatures while making memories that soar as high as an eagle’s wing.