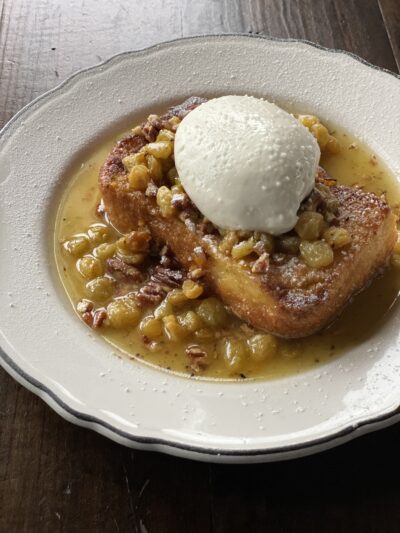 He calls it “French Toast.” But that doesn’t even begin to describe the mélange of flavors from the version Chef Luke Joseph serves during weekend brunch at Automatic Seafood and Oysters in Birmingham.

The bread is pillowy soft. The sauce is a citrusy flavor bomb. It’s a promising start to a relaxing brunch.

Joseph’s menu, which morphs depending on what’s available and interesting from local farmers, fishers, and foragers, is whimsical yet reverent—a reflection of the multicultural skills the New Zealand native developed in kitchens in Australia and in Birmingham at the now-defunct Woodlawn Cycle Café.

Automatic’s Donut Holes ($8 for four) are huge in comparison to the more familiar palm-sized orbs; they’re more like cream-filled doughnuts. This season, they were rolled in a distinctive blend of sugar and nutmeg, with fluffy pumpkin cheesecake filling piped inside.

But the brunch menu at Automatic goes beyond riffs on the genre’s standards. What makes it distinct is its focus on seafood—raw oysters on the half shell, quiche with Gulf crab, and blackened-fish sandwich. 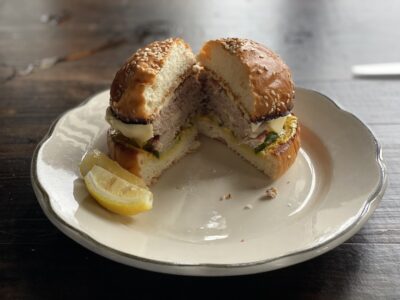 Swapping out the beef for Gulf tuna that’s ground and bound by duck fat, the twin patties in Automatic’s Yellowfin Tuna Cheeseburger ($18) are served on a toasted house-made brioche hamburger bun and dressed with mustard. Sliced cucumbers cold-pickled with fennel and cilantro finish the set.

Lighter than a hamburger, it’s no less flavorful. The duck fat adds a familiar meatiness to the briny fish. The mustard and pickles bring balance to the mallard lard.

“Luke is an amazing chef,” says Adam Evans, Automatic’s executive chef and co-owner. “With his background he does things a little different. It’s refreshing. He’ll run his own restaurant one day.”

Alabama natives Adam and Suzanne Humphries Evans opened Automatic Seafood and Oysters on Fifth Avenue South in April 2019. The atmosphere is upscale coastal fish house, with one side dominated by a bar that curves from a raw-fish station (open for dinner service) through the cocktail area.

Automatic added Saturday and Sunday brunch later that year (the restaurant also has hosted the Saturday-morning Birdsong Farmers Market). My wife and I were their guest recently to sample the brunch menu. What we didn’t finish that morning, we eagerly gobbled that night. 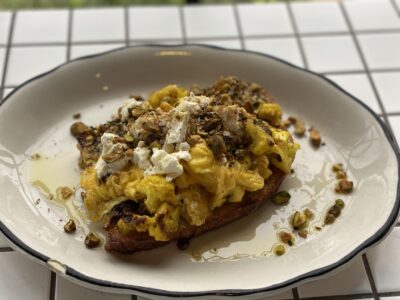 Biscuits are having a moment in Birmingham. Automatic’s squares ($5), light and fluffy, are now served with whipped butter made with in-season apples.

Soft Scrambled Eggs ($15) displays Joseph’s international influences. The dish featured wok-blistered cauliflower florets seasoned with curry powder, and feta cheese made with milk from goats instead of the typical sheep. The crowning touch is an Egyptian spice blend, dukkah, that the kitchen assembles with pistachios, cumin seed, cilantro, and turmeric.

The simply named Benedict ($16) is a complex interpretation of the brunch classic. Its platform is a crisp buttermilk English muffin made in-house. Next is a thick portion of pork belly that’s prepped by braising in stock, slow-roasting, and pressing it before portions are grilled to order.

Sautéed leafy greens, recently spinach, add a mineral-like counterpoint to the rich ingredients. A poached egg perched on the greens is bathed in hollandaise flavored with lemon and orange zest. The stream of yolk released when the egg is sliced creates a complimentary sauce for this delicious dish. 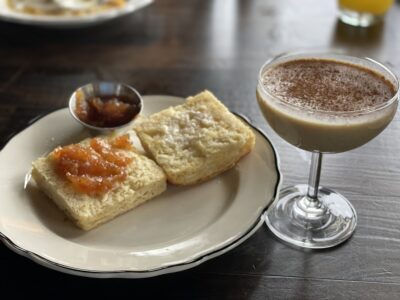 During the holidays, don’t miss the eggnog made with George Dickel rye, sherry, eggs, cream and a generous topping of baking spices.

Automatic, a national finalist for a 2020 James Beard Award as Best New Restaurant, quickly earned a place in Birmingham’s top tier of fine dining. Its brunch only enhances that reputation.