When it comes to American icons, there are few more notable than Gibson. Founded in 1902 by Orville Gibson, the guitar company began the process of moving its operations from Kalamazoo, Michigan to Nashville in the 1970s and has been rocking and rolling there ever since. Over the years, nearly every big name in music has been seen playing a Gibson. From Jimi Hendrix and Neil Young to B.B. King, Bob Marley, and John Lennon, the brand transcends time and genre. It’s a true classic that’s universal enough to appeal to an audience as diverse as the great melting pot that is the United States of America.

Recently, the brand took a trip a little further south to Florence, Alabama for its first-ever collaboration with a fashion designer. Like Gibson, Alabama designer Billy Reid is a true original. Known for his timeless Southern design, excellent construction, and heirloom pieces, Reid is a stalwart in the industry who is just as invested in his community as he is his craft. His Shindig event, which dates to 2009, brings the top musicians, chefs, designers, and artists together for an open-to-the-public, weekend-long party in the Shoals each year. 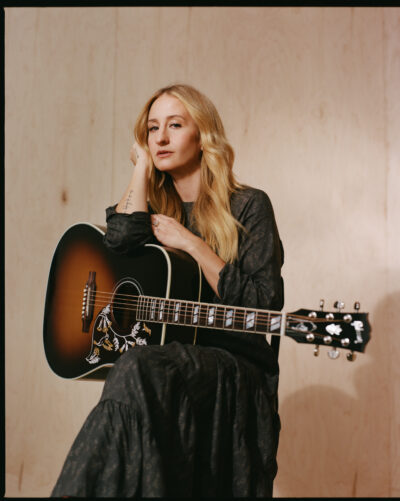 For Reid’s landmark collaboration with Gibson, he designed a capsule collection of menswear and womenswear inspired by the Gibson hummingbird that’s seen on the iconic Hummingbird acoustic guitar. Reid worked with the Gibson design team to create a new logo called The Kissing Hummingbirds, which shows two hummingbirds touching beaks, symbolizing the unification of the two brands.

A version of the Kissing Hummingbird design is featured as a print on pieces like the western-style Embroidered Denim Shirt, cozy cardigans and crewneck sweaters, cotton bandanas, scarves, and a bohemian-style Bandana Tunic for women. The Gibson Biker Jacket is lined with the pattern in gold.

For Reid, who plays the guitar and is a lifelong Gibson fan, the collaboration was a dream come true. “From the influence of Muscle Shoals Sound Studio to our Shindig performances, music has been at the core of the Billy Reid brand since the very beginning,” Reid said. “I’m a big Gibson Hummingbird fan and the picture of the iconic pickguard has been on our inspiration board for many years. Collaborations like this are some are of the coolest things we get to do.”

To debut the new line, the brands tapped musicians Margo Price, Abraham Alexander, and Aaron Lee Tasjan to serve as ambassadors for the collection and bring some personality to the pieces. The Gibson x Billy Reid collaboration debuted on August 21 and will be available on the Billy Reid website, at select Billy Reid stores, and at the Gibson Garage in Nashville.