Bancroft quickly gained regional and national acclaim after he and his wife Christin opened Acre in 2013, their haute yet approachable farm-to-table restaurant in Auburn. Money Magazine later cited its “incredible food” when it named The Loveliest Village on the Plains as the best city in Alabama.

Southern Living magazine named Acre as one of the 10 best restaurants in the South in 2018. Later that year when the Bancrofts opened their second restaurant, Bow & Arrow, the online food publication Eater lauded it as one of the year’s “19 Most-Anticipated Restaurants.”

Why Auburn? Bancroft has strong ties to both the city and university. His parents, Steve and Laura Bancroft, met there in 1972 while joining fellow students rolling Toomer’s Corner for the first time. His brothers, Bill and Ben, also are AU graduates. While attending Auburn himself, David Bancroft was kitchen steward for his fraternity, planning and budgeting house meals while also cooking for large gatherings. The experience helped inspire his desire to cook professionally.

Born in Mobile and raised in a suburb of San Antonio, Texas, Bancroft melds the two regions’ cuisines at Bow & Arrow. Meats are smoked and cooked over fire on a funky multi-level Kudu grill. The side dishes recall vegetables that his maternal grandmother, Jean Kennedy, served at the Geneva County farm where his grandfather, Paul Kennedy, raised beef, catfish, chickens, peanuts, pine trees, and more.

For folks accustomed to ’Bama barbecue shacks with a sign out front depicting a happy hog, Bow & Arrow shoots diners in a new direction. Here are 8 ways Bow & Arrow consistently hits the target. 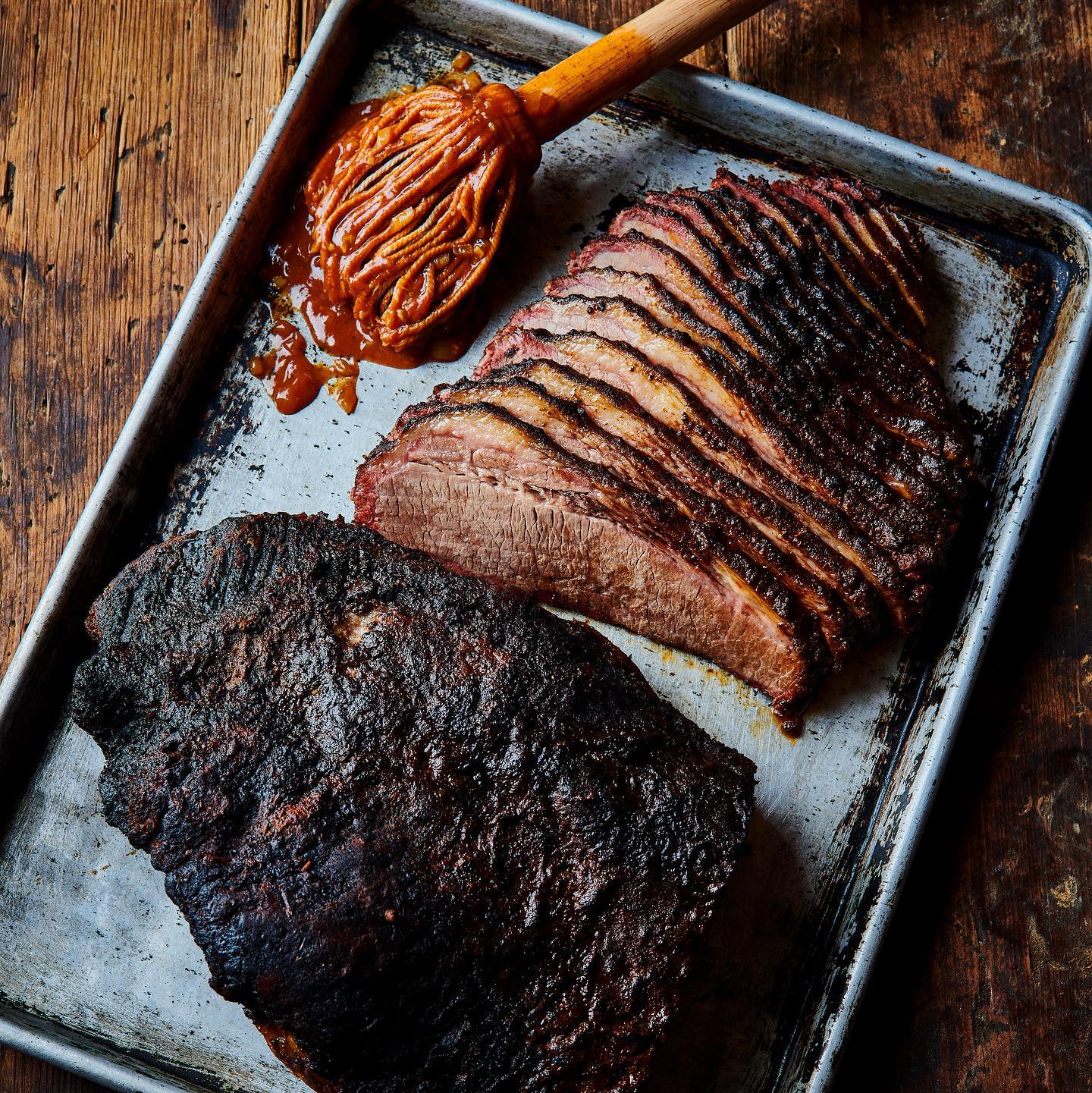 Pork traditionally rules barbecue pits in Alabama, but in Texas beef is king of the ’cue. Bancroft discovered his love of cooking while teaching himself how to smoke brisket and beef ribs as a youth in the San Antonio suburb of Helios. Bow & Arrow even hosts Sunday brisket brunches. But you’ll also find fire-cooked pork ribs and pulled shoulder, turkey, sausage, and chicken. 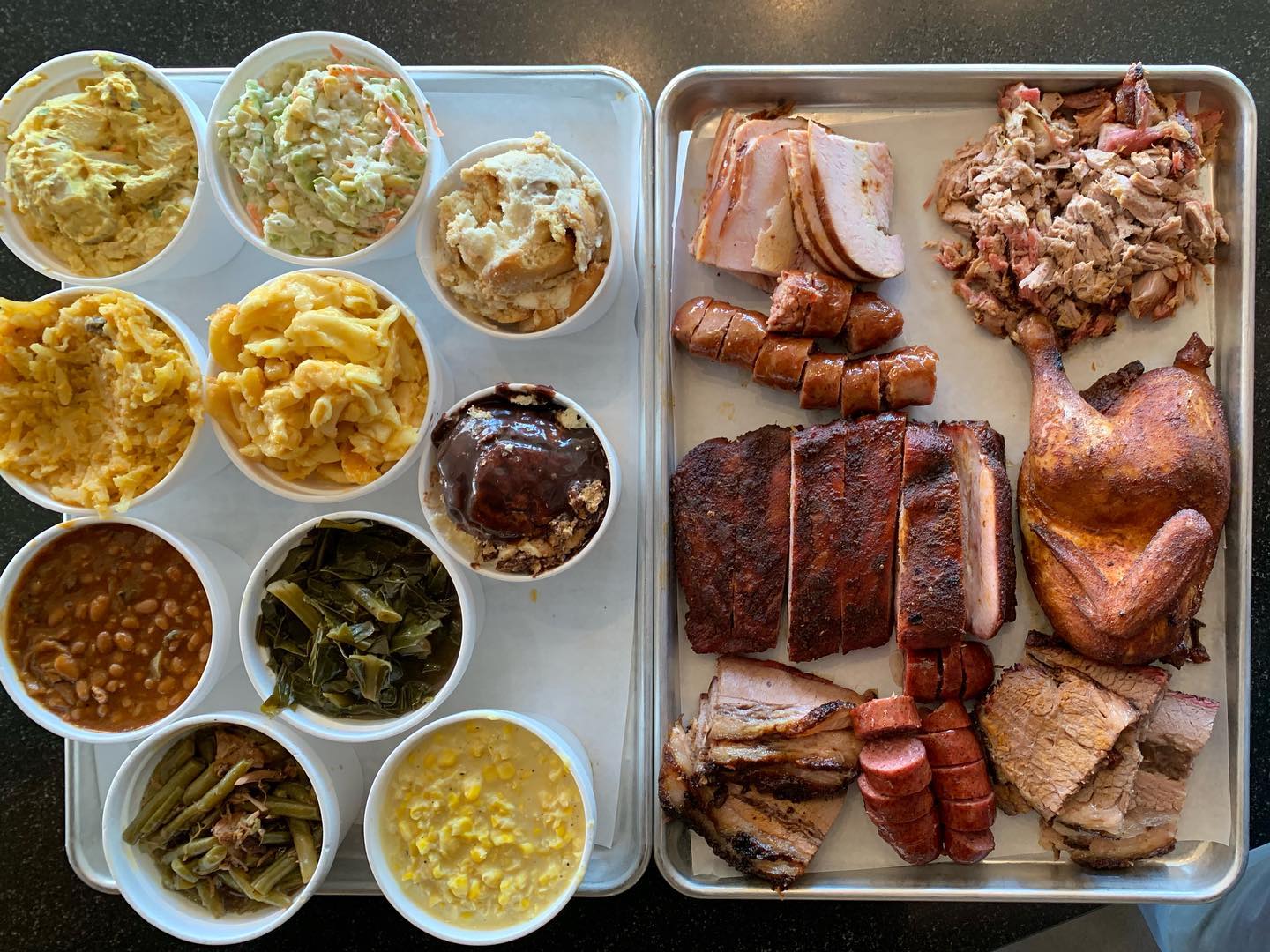 Bancroft describes Bow & Arrow as “Texas/Alabama potluck,” meaning the food talks with both a Texas twang and Deep-South drawl. In addition to Texas-style brisket, the kitchen makes Tex-Mex enchiladas and tacos, borracha beans (soupy spiked pintos), queso dip, and goat-cheese guacamole. Fried chicken and catfish, collards, mac and cheese, and banana pudding are among the culinary representatives for the chef’s native state. 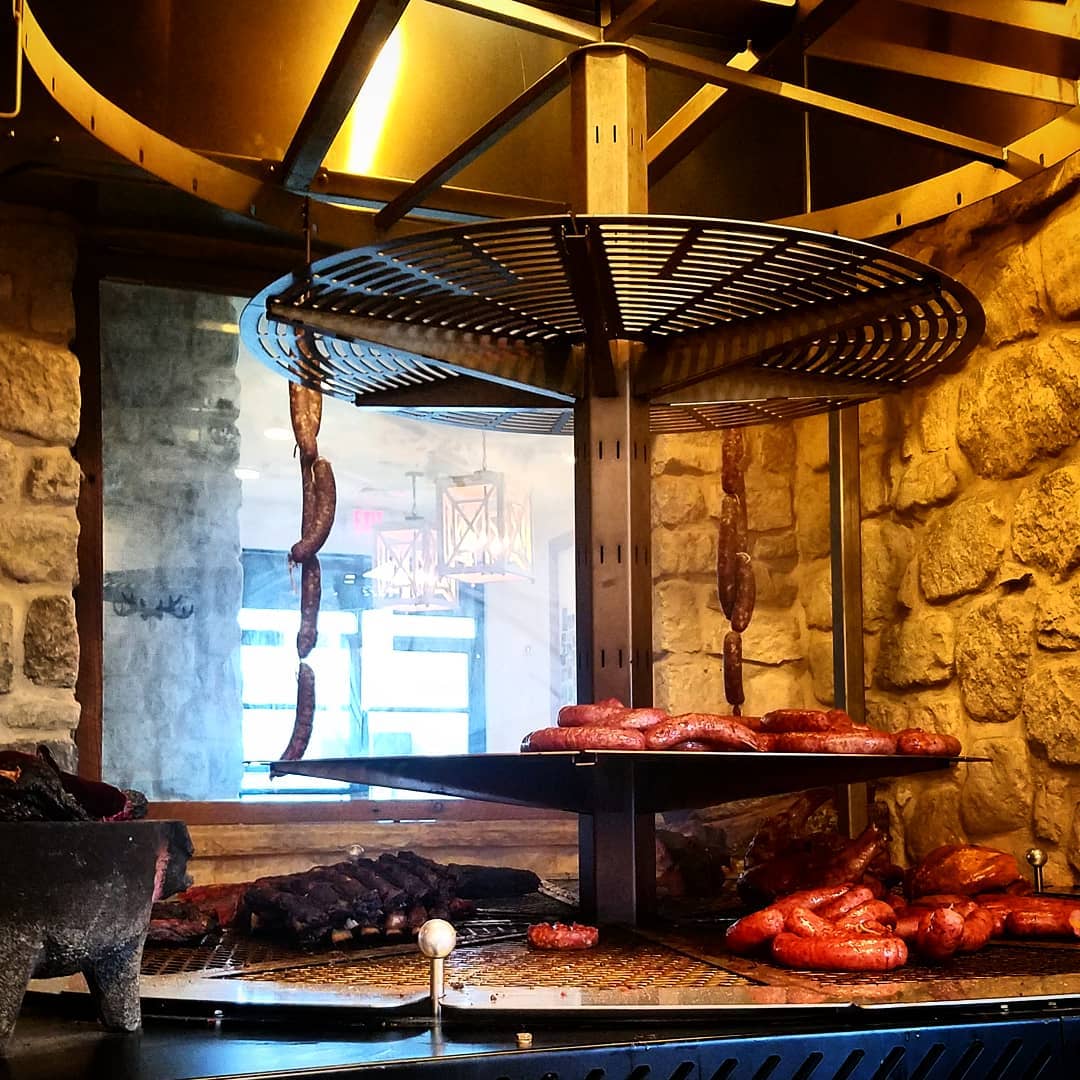 Bow & Arrow’s multilevel wood-burning Kudu grill is a marvelous contraption. A main grate over the fire pit is partitioned for multiple meats. Parallel adjustable round racks attached to a column allow for smoking and hot storage. Sausage links and whole chickens slowly infuse with flavor while hanging from a “meat chandelier” several feet above the fire.

Cue up for ’cue 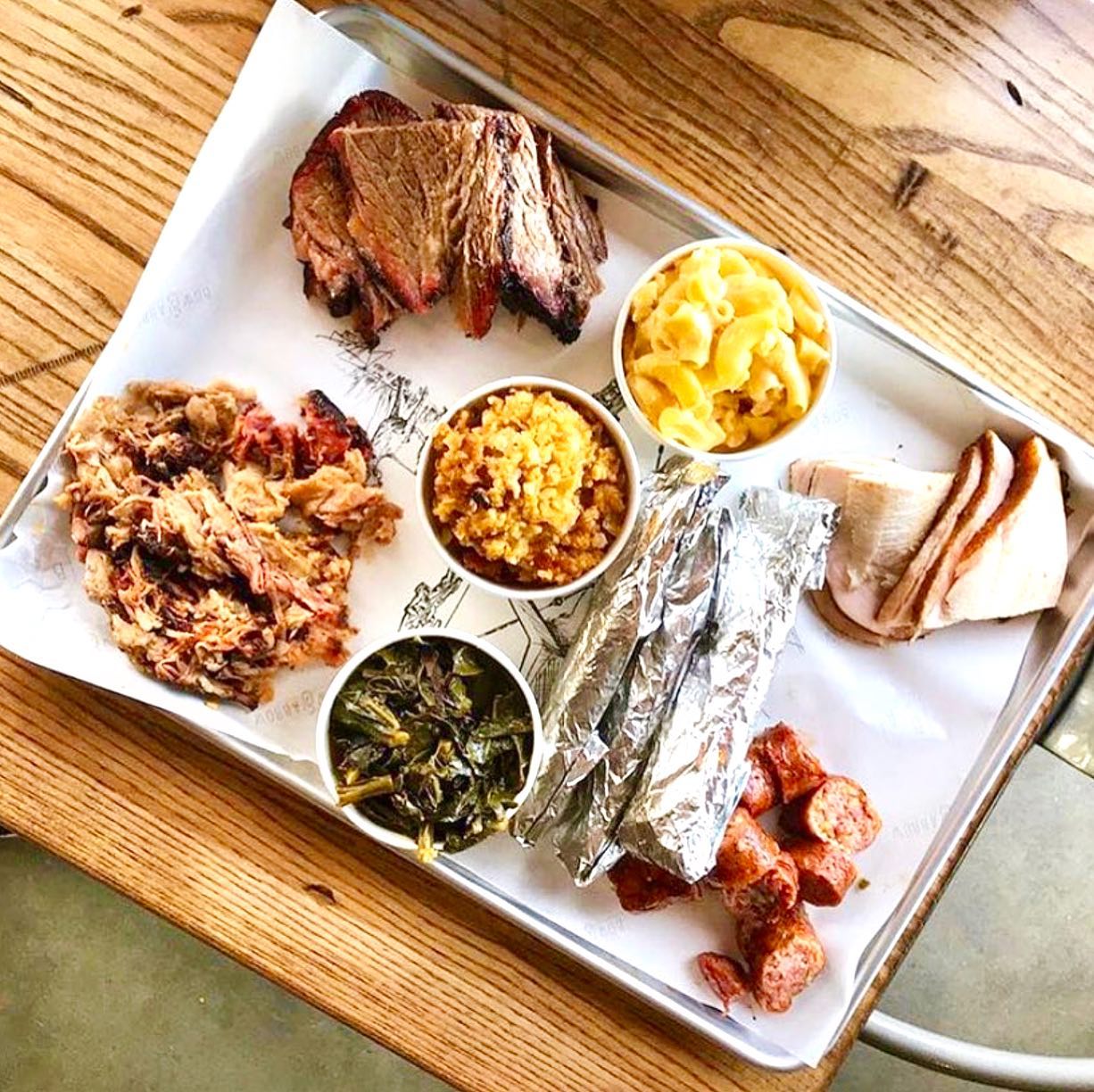 The walk to the counter to order takes customers by the Kudu grill where the cooked beef, pork, and chicken are ready to be sliced and served to order. Grab a tray lined with butcher paper and fill up on sides along a service line, like at a church supper. 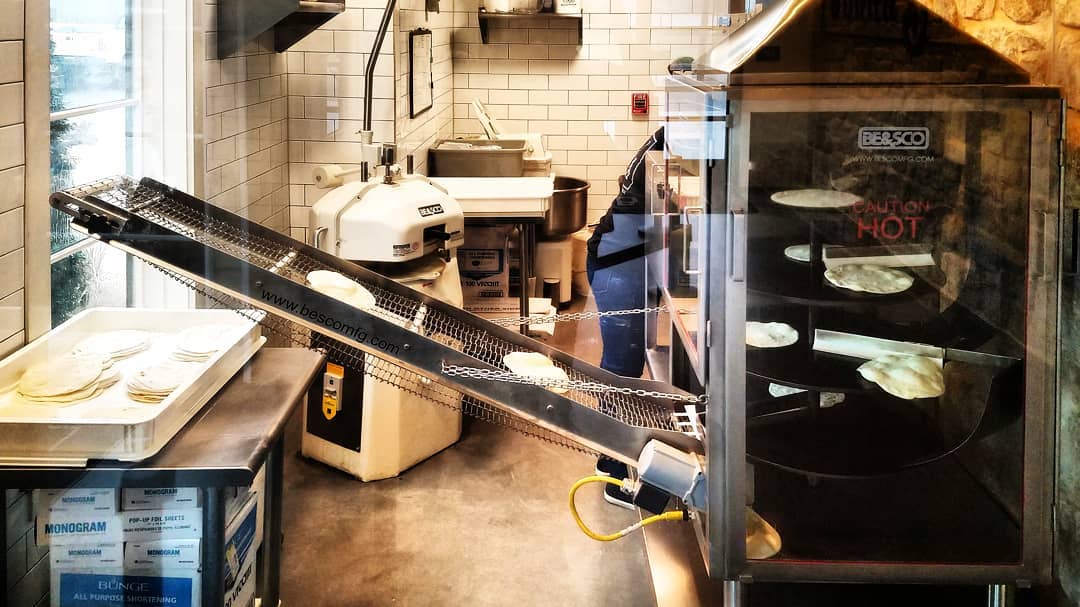 If you’re serving Tex-Mex food, house-made bread must include tortillas. The best is fresh-made, typically using a roller-cooker machine like this one that makes Bow & Arrow’s tortillas for enchiladas and soft tacos. The restaurant’s Lone Star sandwich bread is baked daily.

Chef knows bows (and arrows) and it shows 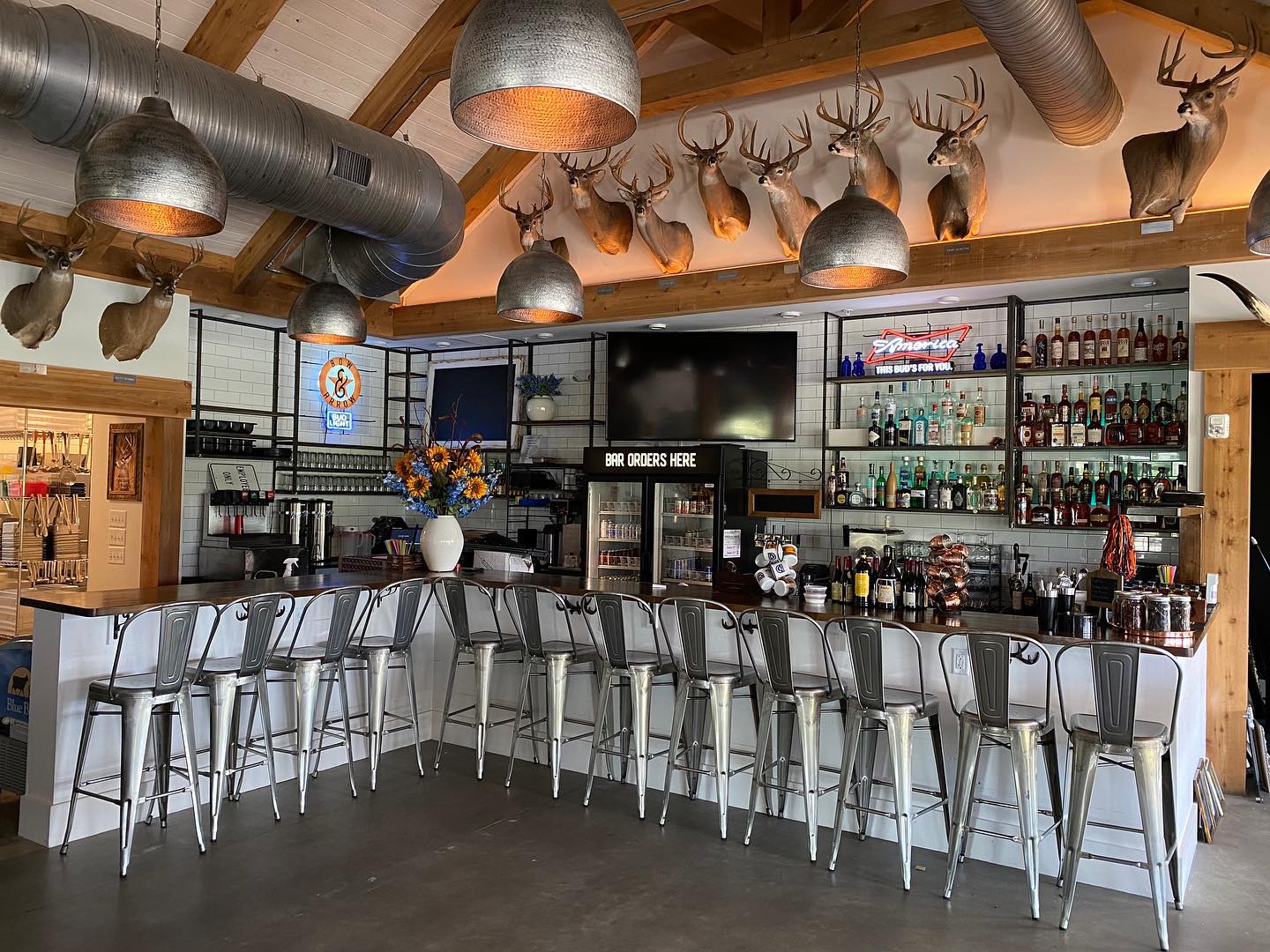 Bancroft is an avid hunter, and his longtime passion for bow hunting white-tailed deer inspired the restaurant’s name. Some of his earliest culinary experiences were cooking his catch over a camp fire. The chef is from a multi-generational line of hunters, and is sharing his love for sustainable hunting with his family. With mounted bucks and other horned animals hanging over the bar and elsewhere, portions of Bow & Arrow’s interior might put you in mind of a hunting lodge. Bancroft calls the display a community hunting gallery. 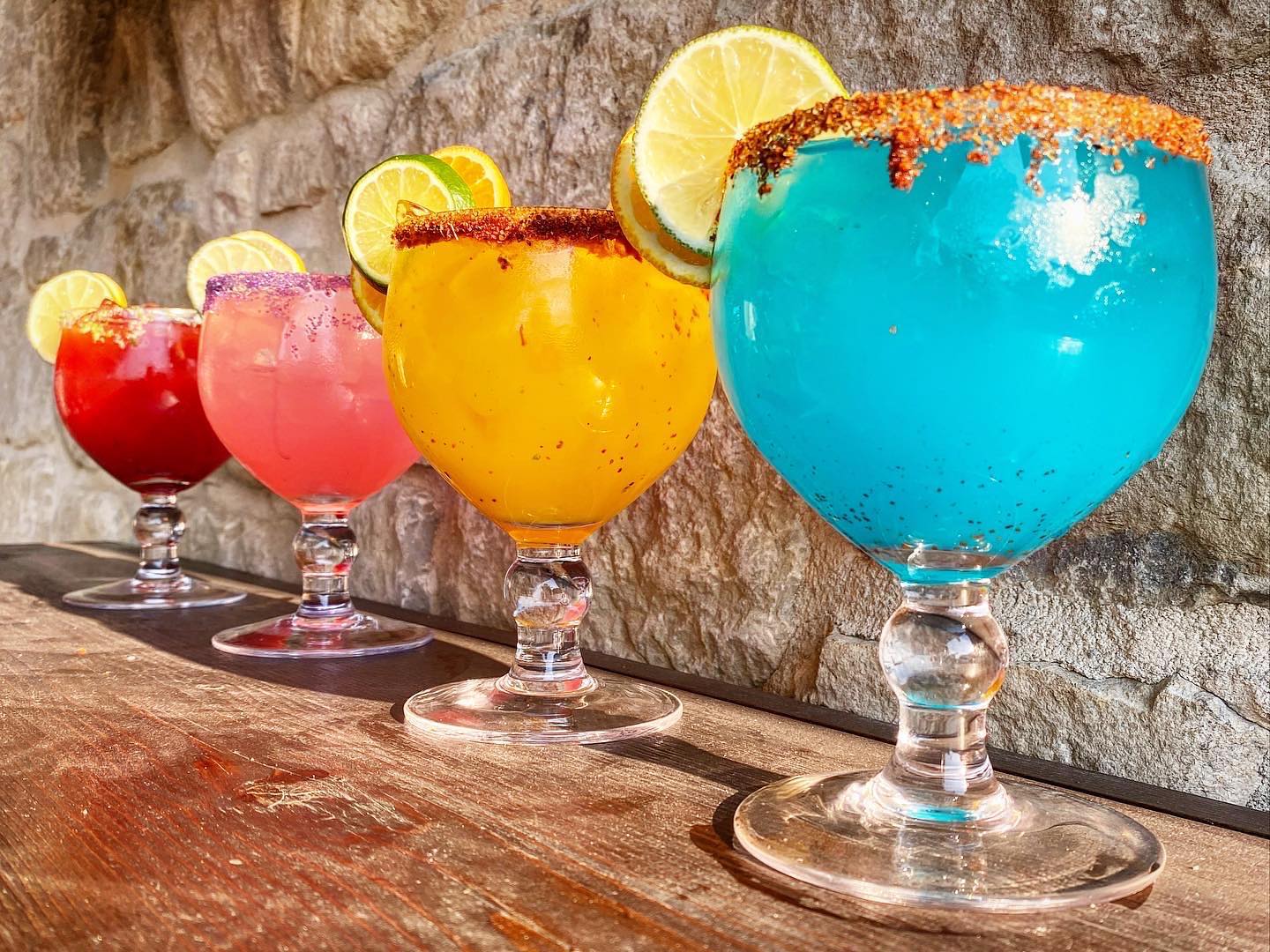 The bar at Bow & Arrow serves nine kinds of tequila-fueled Margaritas and Palomas. Grab a partner and go off the deep end with a 53-ounce Margarita, Surf Rider, or Painkiller cocktail. Choose among nearly four-dozen labels of bourbon, rye, or other whiskey. The list of macro- and micro-brews is just as long.

You know Chef’s a dad when: 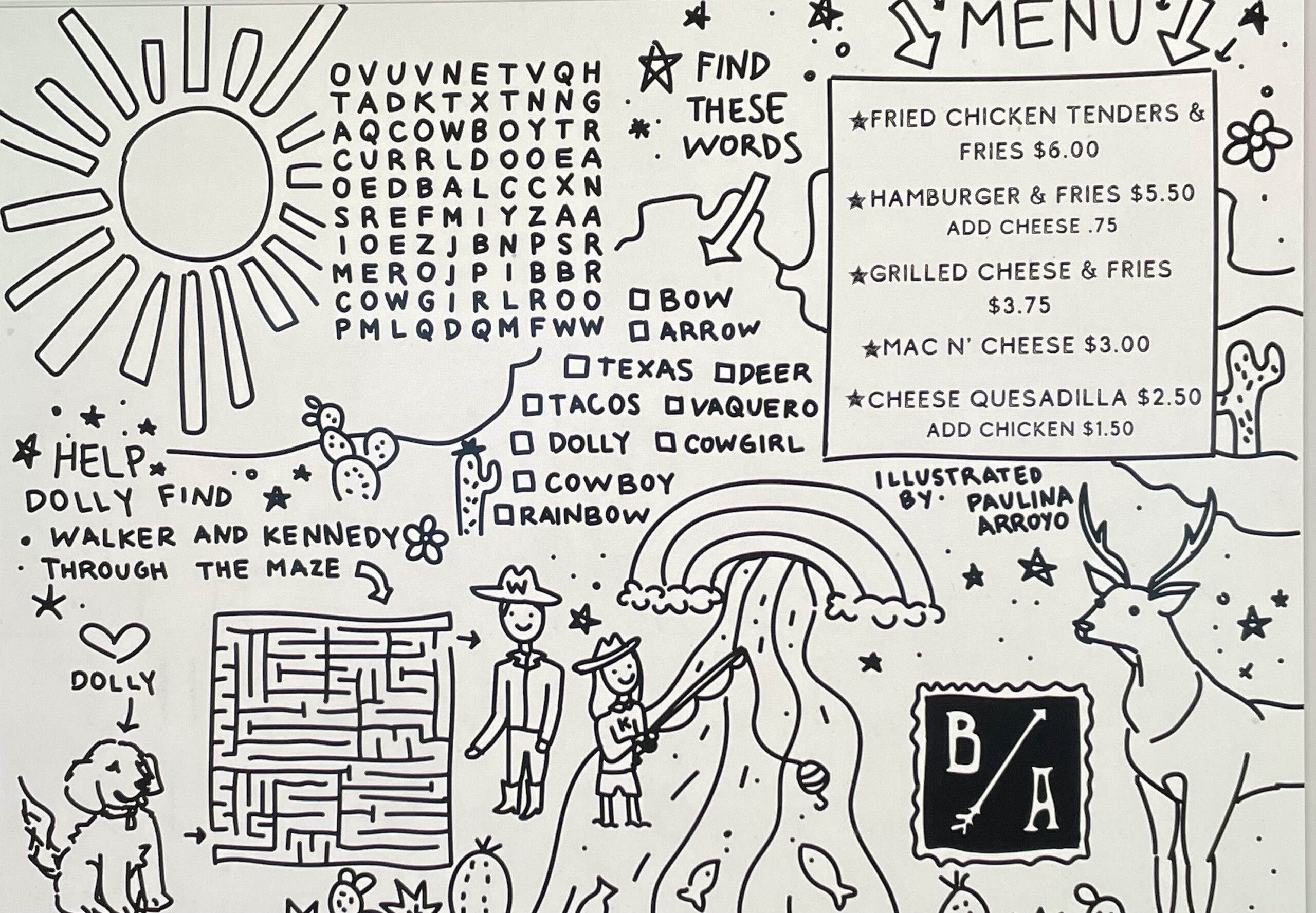 It’s not just the children’s menu with five child-friendly food options. The true tipoff is activities on the menu that provide a much-welcomed distraction to young and restless children, like a B&A-themed word search. Or they can help Dolly the dog traverse a cartoon maze to find the Bancroft children, Walker and Kennedy.