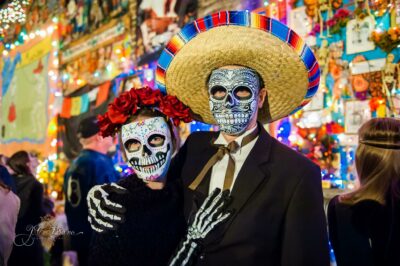 The Day of the Dead observance will include parades, music, dancing, colorful costumes, crafts, personalized altars to ancestors, and a memorial roll call. Food trucks will dish street tacos, tamales, pupusas, and other snacks both savory and sweet.

The stylized skulls and other icons common to Dia de los Muertos may evoke Halloween, but the 4,000-year-old Mesoamerican tradition is more akin to the Christian observance of All Soul’s Day. All three are a mystical nod to the ancient belief that the doors separating the living and dead open temporarily in the period from October 31 through November 2 in western calendars. 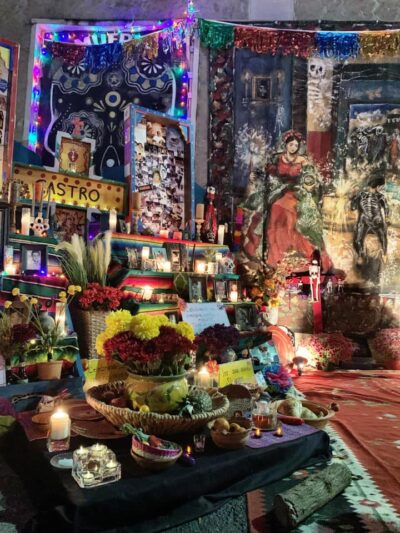 At Dia de los Muertos, families throw a party to welcome back deceased souls with their favorite foods, drink, and song. People indulge in spun-sugar confections shaped like skulls and sweet pan de muerto bread. Some sip atole, a drink featuring two foods native to the Americas, corn and chocolate.

“This festival is basically a big family reunion where dead loved ones are the guests of honor,” says Aimee Castro, president of Bare Hands, Inc., the non-profit that organizes Birmingham’s Dia de los Muertos.

But the event also highlights cultural commonalities, Castro says. “It is a celebration to pay homage to those that have passed while embracing Mexico’s sacred Day of the Dead tradition, the tradition of Decoration Day in the Southern United States, New Orleans Jazz Funeral Processions and Birmingham’s own history and community.”

It’s designed to be family-friendly, including free art activities like elaborate face paintings. Organized events kick off at 5 p.m. with a Mariachi band leading a stroll through the Altars Courtyard where attendees can bring remembrances of the deceased for display. A parade featuring puppets starts at 6:50 p.m.

As names are called out at the Memorial Roll Call, set for 6:30 p.m., loved ones say “presente” or “present” to signify that the person’s spirit lives on in the respondent’s heart. 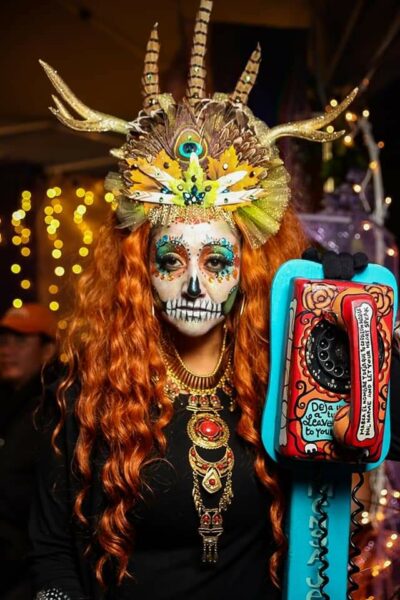 A ceremony honoring famed Mexican artist Frida Kahlo is set for 7:20. Performers include the Ballet Folklorico Corazon Azteca and the group, ETER4.

Of course, libations include Mexican beers and margaritas. Tea and soft drinks also are for sale.

Birmingham’s Dia de los Muertos started in 2003 at what was then Bare Hands Gallery, when local artist Tracy Martin built a traditional Day of the Dead ofrenda, or memorial altar, to her father, the legendary Birmingham News photographer James Isaac “Spider” Martin. Bare Hands has evolved into a public charity that seeks to create a public dialogue through art and culture.

“Bare Hands Inc.’s Día de los Muertos festival is one of the most intricate Day of the Dead celebrations in the Southeast,” organizers say in a news release. “Número 20 is a full-scale celebration you do not want to miss!”