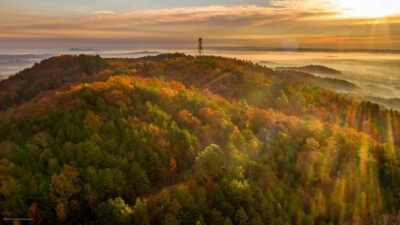 Rising above the clouds, it earned the name, “Island in the Sky.” The Creek Nation labeled it “Chaha,” meaning “high place” in the Muskogee language. At 2,407 feet above sea level, Cheaha State Park towers over the rest of the state as its highest point. Located in the town of Delta in North Alabama, this oasis stretches wide across the horizon in the midst of 2,799 acres of state park, plus the surrounding 392,567 acres of the Talladega National Forest, which in turn encompasses more than 7,000 acres of the Cheaha Wilderness. It affords a rare luxury in these crowded times—miles of vista oblivious to human touch.

From this lofty perch, a vast sea of colorful leaves can be seen stretching into the horizon. While  intrepid outdoor types may choose to hike to the peaks, there are plenty of pull-offs along the road affording majestic views for non-hikers. At Bald Rock, which offers the most spectacular views, a boardwalk is ADA-accessible, making Cheaha welcoming to all. The Doug Ghee Accessible Trail spans 1,519 feet to the overlook.

The absolute highest point is marked with an “X” in the Bunker Tower. The X was originally carved into stone by the Civilian Conservation Corps, who later built the tower over the spot. Climb up the 62 steps for a view that on a clear day, can see Birmingham and the Talladega Superspeedway. This rock structure was completed in 1934 by Company 468, which worked there until 1937. Joining the effort, an African-American Junior Company 465 worked from 1934 to 1935 to help build the park. Company 2420, comprised of WWI veterans also shaped the park with their labor. The Civilian Conservation Corps Museum honors all of those who carved a mountain into a park for the public to enjoy. It is located in the base of the tower. 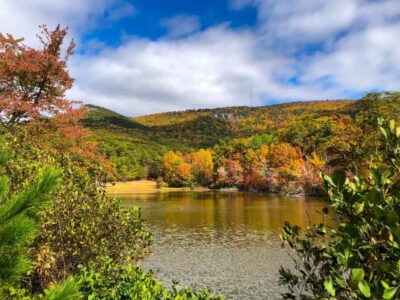 Not all of Cheaha’s wonders rise into the air. Cheaha Lake invites swimmers in warm weather. Paddle and fishing boats float across the six-acre lake. Anglers may find tantalizing fire-pit main courses on the end of a hook. Don’t worry about the kids getting bored while you fish, the large playground provides ample entertainment.

Recreation includes geocaching, rock climbing, repelling and mountain biking. Three biking trails are found on the east side of the park. In addition to the CCC Museum, the Walt Farr Native American Relic Museum displays hundreds of artifacts. The building is small, but every square inch is filled with arrowheads, knives, drills, bird points, pottery, and more.

Check with the Alabama State Park website to find educational programs and guided hikes offered by Naturalist Mandy Pearson. One of the favorite events is Peace, Love and Bigfoot, which gathers experts on the mysterious creature to share opinions. Is he real or not? The experts disagree! Enthusiasts can walk the short Bigfoot Leave No Trace Trail to learn how to walk lightly on earth. You may see images and cutouts of the beast, perfect for a photo op.

Cheaha is Alabama’s oldest state park, founded in 1933. It is the southern-most tip of the Appalachian Mountains. In 1925, legendary hiker, Benton MacCaye envisioned Cheaha as the beginning of the Appalachian Trail. The trail to Georgia’s Springer Mountain has already been blazed, adding 300 miles to the challenging through-hike. A dedicated group is working to push the Trail back to its origins: where the mountain chain begins—in Alabama.

Visitors can access Cheaha from the Talladega Scenic Highway (Highway 281). For the bold, start in Mumford where Cheaha Road (County Road 42) twines through twists, turns and views of virgin forest.