Did you know South Alabama is home to a full-size replica of Stonehenge?

Tucked into the woods near Elberta, Alabama is a sight worthy of a double take. Heading toward Barber Marina on Barber Parkway, a small gravel lot on the side of the road leads to a short path through the woods. At the end of that path in a clearing surrounded by tall Alabama pines lies Bamahenge, a full-scale replica of the prehistoric monument and wonder of the world known as Stonehenge.

For those who can’t make the hop across the pond to Wiltshire, England, Bamahenge is your next best bet. At 21 feet tall and 104 feet across, the replica is built in the exact dimensions of the original Stonehenge. It also is correctly aligned with the summer solstice, just like the original. The roadside attraction is free and open to the public year-round at all times of day or night.

The origins of Stonehenge are still shrouded in mystery. Archaeologists believe that it was constructed in phases between 2,000 B.C. to 3,000 B.C. and took more than 30 million hours to complete. However, they have never been able to reach a conclusion about what construction techniques were used to build it, nor the purpose for the structure.

Bamahenge, on the other hand, has a much clearer origin story. The piece debuted in 2012, but its beginnings date to more than 20 years before when artist Mark Cline of Natural Bridge, Virginia first connected with Alabama billionaire George Barber.

Cline remembers a fateful day in the early ‘90s when a man in a beat-up pick-up truck drove by his home and studio in Virginia asking to buy the massive dinosaurs he was building on his lawn. That man turned out to be Barber’s brother-in-law, and the seemingly outlandish offer turned out to be real. Cline says he thought the whole thing was a scam, but a few weeks later he had $12,000 in his bank account and a request for more dinosaurs. 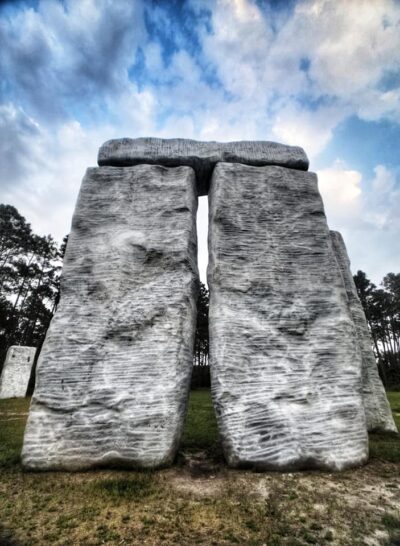 “It was more money than I had ever seen in my life at that time,” Cline says. “So that’s how it started and then over the years Mr. Barber got me to build more things for him.”

Four of the seven dinosaurs that Cline built for Barber back in the ‘90s are located on the same path as Bamahenge on the way to Barber Marina.

The story runs a little deeper for Bamahenge. Bamahenge is actually a replica of a replica. In 2004, Cline connected with the tourism department regarding Virginia’s Natural Bridge, a 215-foot-tall natural limestone arch that is also a National Historic Landmark. The board was looking to spark new interest in their already-popular attraction. Cline had just the idea stowed away in his back pocket.

“At the place where I buy my foam blocks for projects, I walked in one day one day and saw several of them standing up and thought, ‘Wow, that looks like Stonehenge! Maybe one day I can get ahold of these blocks and build a replica,’” he says.

He pitched the idea to Natural Bridge and the rest is history. Foamhenge made its debut on April Fool’s Day 2004.

By 2006, Barber had caught wind of the replica and decided he wanted one of his own at his vintage motorsports museum outside of Birmingham. The project got delayed and the location shifted, but six years later Bamahenge was being transported via flatbed truck to Barber’s new marina on the Alabama Gulf Coast.

Instead of being made from foam like the original replica, this installation was made from fiberglass, using molds from Foamhenge to get the size and shape exactly right. To withstand the temperamental coastal weather, Cline anchored the structures with interior concrete and half-buried telephone poles.

Today, you can see Cline’s dinosaurs and Bamahenge on a visit to Barber Marina. Soon, you’ll once again be able to see Cline’s third installation, Lady in the Lake—the head and knees of a giant lady who appears to be using the Bayou La Launch as a soaking tub. Cline is currently making repairs to the piece, which was damaged by Hurricane Sally in 2021.

Cline says he still stays in touch with Barber to this day and is working on other projects for Barber to surprise the public with in the future.