Dine out for a good cause on April 28 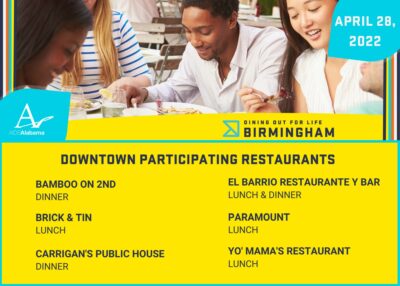 (Dining Out For Life Birmingham/Facebook)

More than two-dozen restaurants in greater Birmingham will donate up to 35 percent of their proceeds on Thursday, April 28, as part of the ongoing Dining Out for Life fundraiser.

Part of a national effort to raise money for local service groups helping people with HIV, Birmingham’s Dining Out for Life supports AIDS Alabama, which helps provide housing and other assistance, offers education and outreach programs, and engages in policy advocacy.

“All of the proceeds that are raised by our event stay here in Birmingham,” says Caroline Bundy, director of development at AIDS Alabama. “They go to help fund all of our programs and serve our clients better.”

Most participating restaurants will donate either 20 percent or 25 percent from both food and alcohol sales. Downtown Birmingham’s Bamboo on 2nd and Jack Brown’s Beer and Burger Joint in Birmingham’s Lakeview District will give 35 percent of the pre-tax check.

You can maximize your impact for the cause by eating breakfast (Big Bad Breakfast in Homewood, pictured above), lunch (‘Yo Mama’s or El Barrio in downtown Birmingham), dinner (Slice Pizza in Vestavia Hills and Birmingham), and sipping cocktails (Key Circle Commons in Mountain Brook). 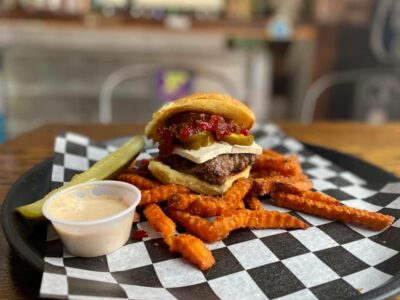 Some restaurants, like Chez Fonfon in Birmingham and Vecchia Pizzeria in Hoover, will donate proceeds from lunch and dinner. A full list of participants—and the percentages they’ve pledged—is available here.

Nationwide, Dining Out for Life events are set for nearly two dozen states in 2022 (plus Vancouver, Canada). It has raised some $5.5 million since it was founded in 1990. Mobile’s Dining Out for Life, which benefits AIDS Alabama South, is set for December 1, which is World AIDS Day.

Birmingham’s fundraiser is in its 13th year. “Some restaurants have participated every year,” Bundy says. “We’re very grateful to them all. It’s very humbling.”

Last year, as the pandemic was devastating the restaurant industry, AIDS Alabama did not hold a fundraiser, but encouraged its supporters to order pickup and curbside that night from prior participants as a thank you for their support.

Several restaurants that normally donate had to take a pass this year, still rocked by the economic downturn and related pressures.

The coronavirus has brought other changes to Dining Out for Life in Birmingham, Bundy says. Pre-pandemic, the organization dispatched what she calls “in-restaurant ambassadors” who would go table to table, thanking people and explaining the organization’s mission.

“Nobody wants anybody to walk up to their table now, so we’re having ‘virtual ambassadors,’” Bundy says. “We urge people to share on their own social media, ask their friends and family to dine with them or solicit donations.  Help us put out the word through their social media.”

Bundy says she and a co-worker will, as always, hit every restaurant on April 28 to add a personal thanks.

There’s a side benefit, too. “We get the distinct privilege of eating breakfast, lunch, and dinner out,” Bundy says. “Calories don’t count that day.”