Eat breakfast at The Waysider, one of Tuscaloosa’s oldest restaurants 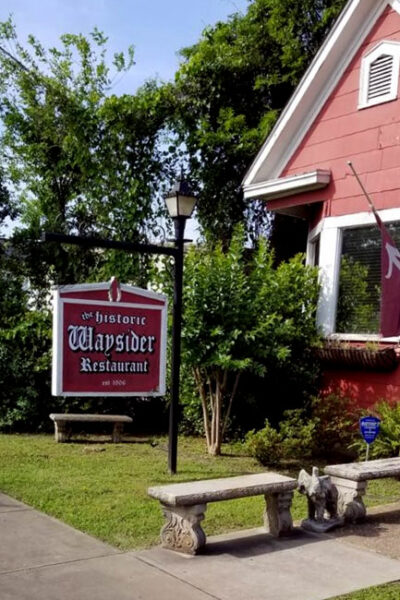 It’s not often that Nick Saban meets you at the door to a restaurant, even if it is just a full-sized cardboard cutout inside the entrance to The Historic Waysider Restaurant in downtown Tuscaloosa.

The multiple national championship-winning coach is just one of the Alabama Crimson Tide legends honored at one of Tuscaloosa’s oldest restaurants, which also doubles as a shrine to Alabama football.

There’s the spot where Coach Paul “Bear” Bryant liked to linger over breakfast and read the morning paper. The small table boasts a bust of the Bear, adorned with his signature houndstooth hat, and the walls are packed with framed mementos of him. Flowers set on the table are crimson and white.

Autographed photos, newspaper clips, prints and other renderings of famous Bama plays, players, coaches, and school officials hang on walls throughout the 50-seat restaurant, located in a house that was built in 1906 and converted to a restaurant in the mid-20th century.

Heck, even the resident cat is named for Saban (although the former stray’s name was changed from Nick to Nicky when “he” turned out to be a she). And the crimson exterior paint at The Waysider is known to regulars as “Mal Moore red,” after the late player, coach, and athletic director who was a restaurant regular and sometimes its greeter.

A meal there is mandatory for any self-respecting UA student, family member or Crimson Tide fan. But expect a long wait on home-game weekends, especially Sunday mornings when more than 700 diners roll in.

Open for breakfast every day but Monday, and for lunch Tuesday through Friday, the menu is decidedly old-school, down to the streak-o-lean bacon, short-stack of house-recipe “hot cakes,” and coffee-laced red-eyed gravy.

The Waysider is known for fluffy, scratch-made biscuits and bottomless cups of coffee, along with grits (automatically served with each order) and sugar-cured ham. If you’re lucky—or wearing a rival school’s colors—your pancakes will arrive cut and formed to resemble Big Al, the school’s elephant mascot.

Rece Davis, who was a student at UA in the 1980s and now is a major figure for ESPN including as host of its popular GameDay program that travels weekly to college football hotspots, counts The Waysider among his favorite stops whenever he returns to town.

“Eat breakfast at the historic Waysider Restaurant, where you can order country ham and red-eye gravy with biscuits and sit at Paul “Bear” Bryant’s table,” the staff-written guide says while advancing the Nov. 6 matchup between Bama and the visiting LSU Bengal Tigers. “You can’t miss it. It’s the one with Bryant’s bust front and center.”