Eat your way along the Lower Alabama Smoked Sausage Trail

Ask Southern food lovers to name an Alabama-made smoked sausage, and most will mention the Conecuh brand.

It’s sold in most major groceries in Alabama and is regularly name-checked by chefs and home cooks alike on menus and in published recipes. Conecuh Sausage even has a Facebook fan club.

But a few other meat houses in the southern part of the state produce sausages that more than hold their own with their better-known counterpart.

These links come from an 80-mile stretch that we’ll call the Lower Alabama Smoked Sausage Trail. Start in the town of Beatrice at Monroe Sausage, cut south to U.S. 84 and head east toward Conecuh in Evergreen, Snowden’s in Andalusia, and finally Kelley’s just off the highway in Elba.

The other brands are not as widely available as Conecuh but can be found in local markets that specialize in state-made products. To research this story, I bought packages of all four at my local Piggly Wiggly.

For a list of stores where you can buy them—as well as recipe ideas—check out the manufacturers’ websites.

Grilling is, hands-down, the most popular way to prepare these sausages, making them perfect for tailgates and cookouts. But they also can star in gumbos, rice dishes, and pots of beans. Smaller-sized rope sausages make great smoky substitutes for hot dogs and pigs in a blanket.

Join me as we travel the Lower Alabama Smoked Sausage Trail, swapping their stories and sampling their main products. 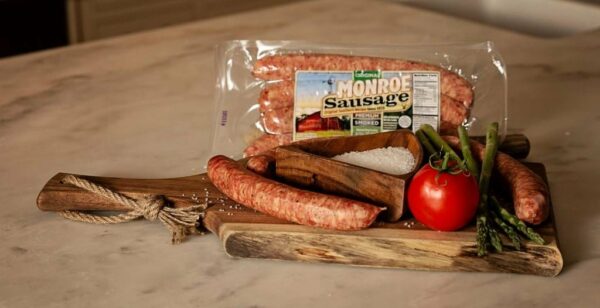 Originally known as Monroe Meat and Storage, the company was purchased in 1952 by Jimmy McMillan and Bill Causey. They started tinkering with a hickory smoked sausage recipe, perfecting it for commercial sale in 1959. As the salesman, McMillan was so connected to the product that customers just called it “Jimmy’s sausage.”

An employee, Jeff Kircharr, bought the company when McMillan and Causey retired in the 1980s. But the plant was destroyed by Hurricane Ivan in 2004, forcing the company to shut down. David Steele and investors revived the brand in 2007 in a new facility in Beatrice.

Original link sausage: Ground coarse enough to show different cuts of meat, the dense sausage is flavor-packed with noticeable smoke and a spice mixture dominated by garlic. The black pepper flavor builds with each bite. The hog casing is a bit chewy. 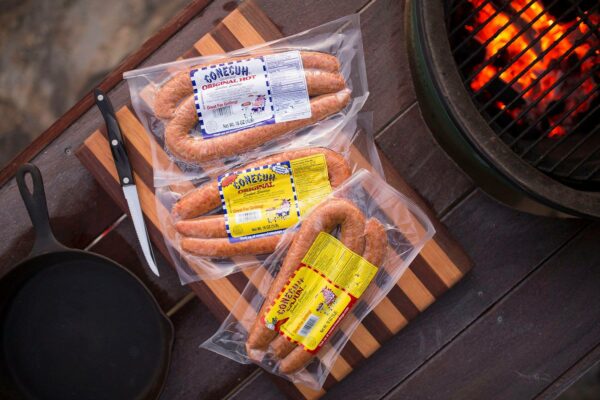 Owned and operated by generations of the Sessions family, Conecuh started in 1947 as a meat locker, providing storage for local hunters and farmers. The family soon started making hickory-smoked sausage and other cured meats like bacon and hams. Its huge retail store and gift shop off Interstate 65 (Exit 96) sells all of Conecuh’s meats, plus branded swag and even seasoning for seafood boils. Conecuh products are distributed throughout the southeast and Texas, and in parts of Michigan, Ohio, and New York.

Original smoked link sausage: Deep-smoked, the flavor is slightly sweet with an undercurrent of black pepper. The grind is very meaty, and the sheep casing is pleasantly chewy. 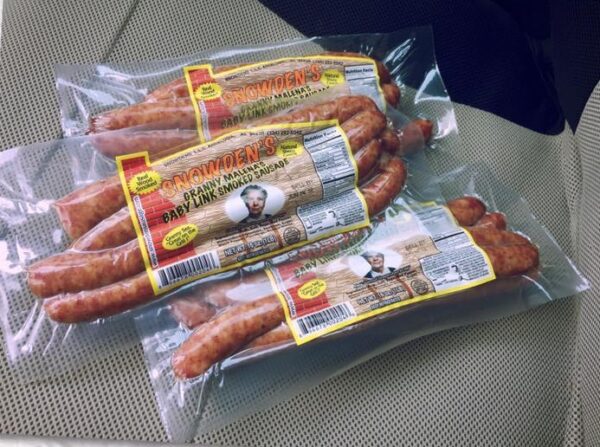 The Snowden family has made this distinctive smoked sausage in the Andalusia area since the 1930s. Randy Snowden, the current president and co-owner since 2008, still follows his grandparents’ original recipe. No water is added, just pork and spices. It’s also distributed in parts of Mississippi, Georgia, and Florida.

Malena Brand mild link sausage: Loosely packed and coarsely ground, it has a softer texture than the other sausages made along the trail. Snowden’s is uniquely spiced and has a distinct funkiness reminiscent of air-dried cured meat. 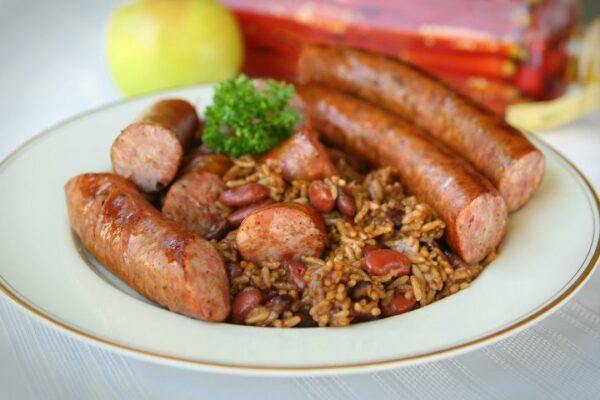 Founded in 1957, Kelley Foods was family-operated for nearly six decades until its purchase in 2016 by a Texas company. Its products, still made in Elba, also are distributed in Florida, Georgia, Mississippi, and Louisiana.

Baby Link sausage: “Hardwood smoked,” the label says, mysteriously assuring “No poultry added.” It is, indeed, the smokiest link on this sausage trail. The grind is meaty, with just the right ratio of pork fat to meat. In addition to water, the sausage is moistened and flavored with pork stock. The thin sheep casing has a nice chew.