Ferus Artisan Ales to open a second taproom in Birmingham

Ferus Artisan Ales is expanding from its relatively remote Trussville base camp to open a taproom in Birmingham’s Avondale neighborhood that will serve its distinct ales, sour brews, and pilsners in one of the Magic City’s hottest entertainment districts.

The taproom, Ferus on 41st, will have 16 taps serving its beers and a kitchen dishing Ferus favorites like its Smash Burger. It’s slated to open by early June. An outdoor beer garden will follow sometime after the interior opens.

It will be a homecoming for Nate Darnell, Ferus’ head brewer since it opened in late 2019 and its current operations manager. Darnell, who will split his time between the locations, lives about two blocks away from the new taproom on 41st Street South at Fifth Avenue, near spacious Avondale Park. Before Ferus, he made beer and distilled at Avondale Brewing Co., a few blocks down the street.

“It will be nice to be close to the house,” says Darnell, whose current commute to Trussville northeast of Birmingham is some 15 miles. “I love that area. I’m glad we’re doing a Ferus taproom there.”

Ferus on 41st will not have its own brewery, Darnell says. Ferus’ Trussville brewpub will produce beer for both locations.

In addition to Ferus’ lineup, the taproom also will serve bottled and canned brews from other local breweries, and will have a full bar.

The area around Avondale’s 41st Street is booming with restaurants, bars, and music venues. As an entertainment district, patrons are allowed to move around the area with alcoholic drinks.

Initially the menu will mimic Trussville’s, but the chef Blake Fulgham eventually will put his own stamp on the food, Darnell says. Fulgham’s background includes stints at Bottega and Highlands Bar & Grill in Birmingham. Ferus’ menu includes entrees such as steak frites and seafood with grits, along with composed salads. IPA-marinated chicken wings, sweet potato hummus, and Creole Poutine—fries covered with crawfish étouffée—are among the appetizers.

In addition to draft, Ferus also packages its core beer in cans and uses 750- or 500-ml bottles for its sours and special batches like barrel-aged Imperial Stout. A recent bottled release is Ferus’ Samantha series of aged sour ales with raspberry, apricot, or blackberry.

“We’re always trying to innovate and have fun,” says Darnell. 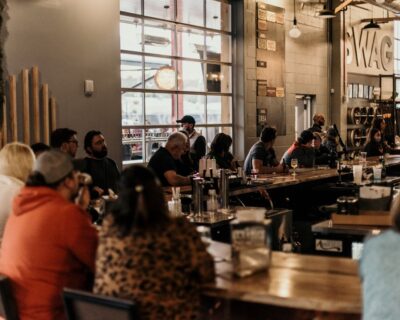 The Avondale taproom will occupy the bottom floor of the two-story building that once housed Fancy’s on Fifth restaurant. The interior will resemble the flagship in Trussville.

Ferus owner Coby Lake opened the Trussville brew pub in October 2019 to tap an under-met need for fresh craft beer there, and to anchor the Trussville Entertainment District he was developing. Ferus currently books bands for the outdoor stage at the TED.

“People come out, sit on the grass and watch a concert or a football game on a giant viewing screen,” Darnell says. “It’s been absolutely amazing.”

At the new location in Avondale, they’re hoping to foster that same kind of community.