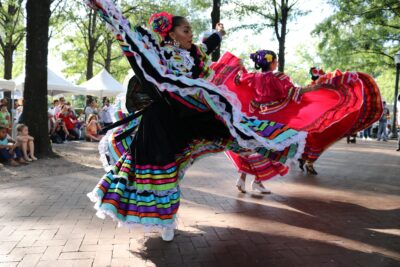 Mariachi music swells, salsa dancers twirl in brightly colored skirts, and the smell of freshly griddled corn tortillas wafts through the air. These are the sights, sounds, and smells of Fiesta, Birmingham’s long-running festival celebrating Hispanic culture and heritage. Each year, Linn Park comes alive for the giant party with thousands of locals gathering for the celebration that includes music, arts, dance, food, activities, and education for the entire family. And this year, the festivities will be even grander because Fiesta is celebrating its 20th birthday.

Teresa Zuniga Odom, one of Fiesta’s founding board members, has been part of the event since before the first Fiesta took place. She says she remembers the early days, when organizers hoped that even a thousand people might show up. “We ended up having over 5K that first year,” she says. “We were all so giddy and pinching ourselves at the success.” 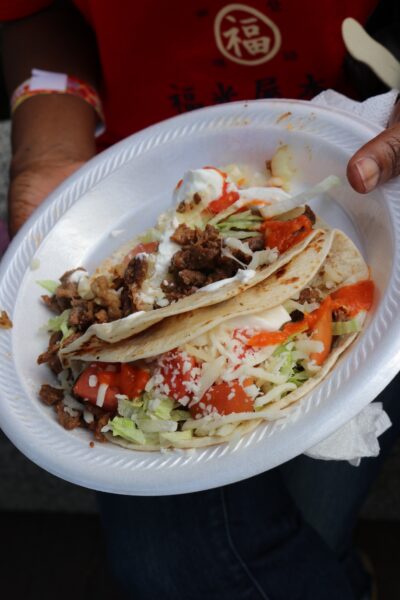 Since then, the festival has grown each year and now annual attendees hover around 15,000. Form the beginning, Odom says, Fiesta has had two main goals: to raise awareness for and celebrate the diverse Hispanic community and to create a scholarship for Hispanic and Latino youth in Alabama. Over the past two decades, the festival has succeeded on both of those accounts—and so many more.

“When I think of what Fiesta offers the Birmingham community, it’s a chance to be friends with someone you wouldn’t ordinarily think of or approach to be your friend,” Odom says. “I really love that aspect of Fiesta. And eventually, you start to feel like family. This is why our theme this year is ‘Somos Familia’ or ‘Feels Like Family.’ After 20 years, we do feel like we are all one big family at Fiesta.”

On the day of the festival, Odom has a hard time making it from booth to booth because she’s stopped so frequently to greet old friends and vendors who have returned to Fiesta year after year. And the same is true for so many longtime attendees who look forward to the gathering each year. “It’s such an incredible feeling to know we’ve been able to bring these folks back together for this one day of art, music, food, dance, and to make new memories and share old ones.”

But part of what makes Fiesta so special is that it’s not just for those who are already entrenched in Hispanic cultures or those who have attended in past years, it’s for everyone. And because more than 20 different countries are represented at the event each year, everyone has something to learn. “I think at one point, people thought Fiesta was an event solely for the Latino community but that was never true,” Odom says. “It’s a chance for the Latino community to be seen by the community at large and form relationships and welcome others to the table.” 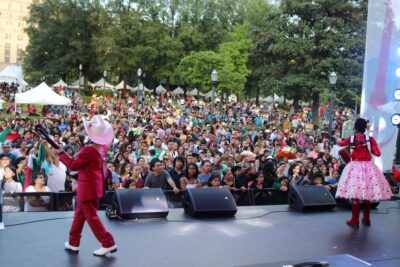 One of the best ways to jumpstart the cultural immersion is to visit the Cultural Village, where people from countries across Latin American set up booths and demonstrations about their traditions and customs. From there, first-time attendees should be sure to check out the main stage to discover Latino musical artists and dancers, walk through the vendor area to find a handmade craft to take home, and of course try cuisine from every country you have room for. The Family Village is a great place for kids to get hands-on with crafts themed around Latin culture.

This year, the festival is also bringing back a long-lost favorite activity, Lucha Libre, or a form of professional wrestling, distinguished by colorful masks and costumes, that was first introduced in Mexico in the early 20th century. In carrying on family traditions, the son of famous wrestler Blue Demon, who debuted at Fiesta in 2007, will be joining the competition this year. 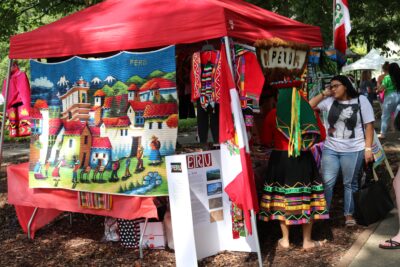 With all the fun and fanfare, it’s easy to forget that the festival has a second mission—to raise money for a college scholarship fund benefitting Hispanic youth. In recent years, organizers have begun awarding recipients with a “big check” on the day of the festival so attendees, sponsors, and donors can see who their money is supporting. “It’s the most rewarding part of Fiesta for me because this is why Fiesta was created in the first place,” Odom says. “These Latino kids bring such a rich cultural experience to whatever they put their minds to and work hard to make their families proud. I am in awe of their determination and persistence. They make me want to do more so we can help more students!”

For Odom and other organizers, Fiesta has met and surpassed every goal they could have hoped for, but they’re not slowing down anytime soon. Odom says she’d love for the one-day even to eventually become a weekend-long celebration similar to Fiesta San Antonio. In the meantime, she’s happy to count it among her greatest accomplishments in life. “Being a part of Fiesta is one of the best things I’ve ever done, and I’m so proud of how far it has come, the lives it has impacted, and how it continues to be something that people look forward to every year.”

This year’s Fiesta will take place on September 24 from noon to 8 p.m. in Linn Park. Advance tickets are $12 and children 12 and under can enter for free.