When Debbie Deese wanted to buy an abandoned one-room schoolhouse located off a remote county highway to turn into a restaurant and catering operation, her father suggested she sell furniture there instead.

Who’s going to drive that far out into the country—five miles outside of unincorporated Grady and at least 25 miles from the nearest cities, Montgomery and Troy—simply for a meal?

Deese took that as a challenge, quickly building a clientele for her fresh-made meats, vegetables, and desserts in the family restaurant that she named to honor her dad, who everybody knows as “Red.”

Red’s Little School House restaurant expects up to 600 people to pass thorough around Thanksgiving to pick up food or sit down for a meal in the 111-year-old building, which still has a chalkboard from its school days. 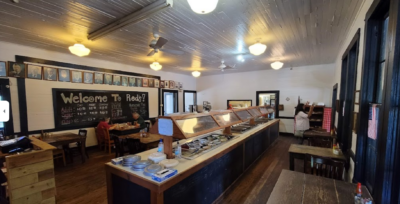 The meat-and-three buffet eatery, which turns 37 next May, is a family affair. On Thanksgiving, three generations of Deese kin will serve the crowd. Until an injury last year interrupted his farming, Red grew most of the restaurant’s vegetables on a farm a couple miles from the restaurant. 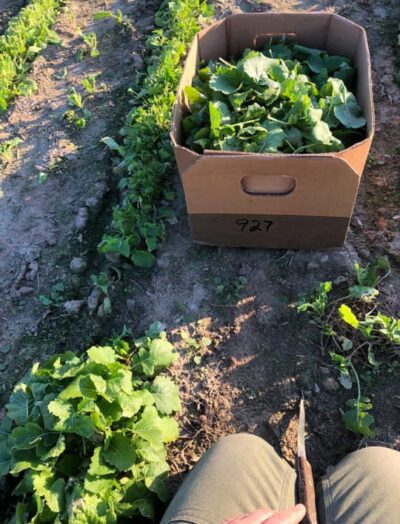 “Daddy used to tell customers ‘I plant 20 acres. Ten are for the deer and 10 are for the restaurant.’” Deese says.

Red’s serves simple country cooking, how Deese’s grandmother, Frances Knighten, taught her to prepare food. “She was an amazing cook,” Deese says. “My grandmother fell and broke her hip and I moved in with her when I was very young, like right after high school. She kinda talked me through it.”

Deese makes all the pies—on a recent weekday they were coconut cream, chocolate meringue, lemon merengue, pecan, and buttermilk. For Thanksgiving she’ll fill up to 150 crusts. 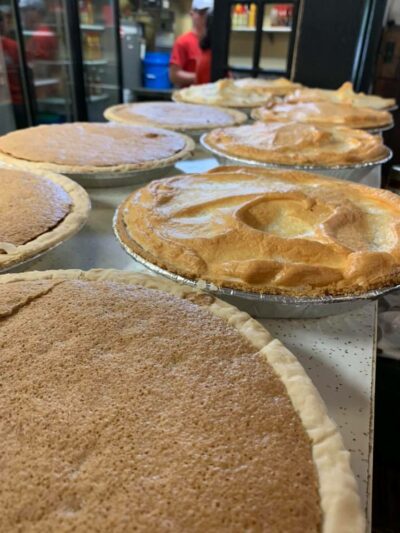 “Everything has got to be made fresh,” she says. “Nothing out of a box or a bucket. Every salad on our salad bar is made from scratch. I make homemade (sweet) pickles. I have to make them two, sometimes three times a week. They’re just crazy good.”

The restaurateur operates on a simple theory: If you want to convince people to drive miles for a meal, it’d better be something different, something special.

Red’s apple-cheese casserole is special enough to make the Alabama Tourism Department’s list of “100 Dishes to Eat in Alabama.” Available Saturdays and every other Sunday, it’s been a staple since the beginning.

Deese has a tip: Spoon some of the Heavenly Hash dessert, whipped cream with fruit, on top of the apple-cheese casserole. “They’re both good, but when you put them together it’s like chemistry, she says. “It’s better than apple pie and ice cream. It’s just amazing.” 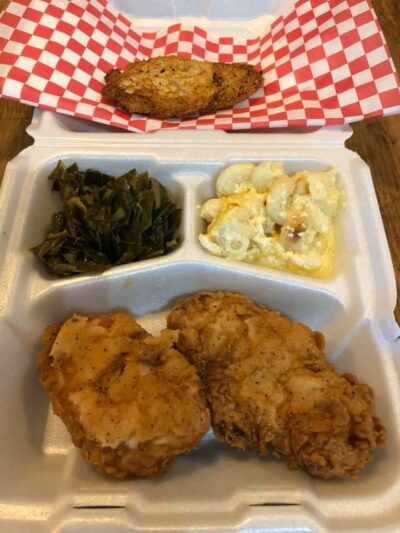 Deese is proud of what she’s built over the last four decades. The restaurant has come a long way since the early days when Deese would come in pre-dawn to cook, go home to make breakfast for her family, and return for two shifts as server, cashier, and front-of-the-house general. Now it employs eight. Red’s has expanded twice adding enough seating for close to 150 people.

But one thing hasn’t changed over the decades, Red’s simple, honest fresh food remains true to the lessons that grandma Knighten taught Deese those days after high school.

“The back of our shirt says ‘If you ate any better your grandma cooked it,’” she says. “Going to Red’s Little School House is like going to grandma’s.”