Find more than books at Jim Reed Books in Birmingham 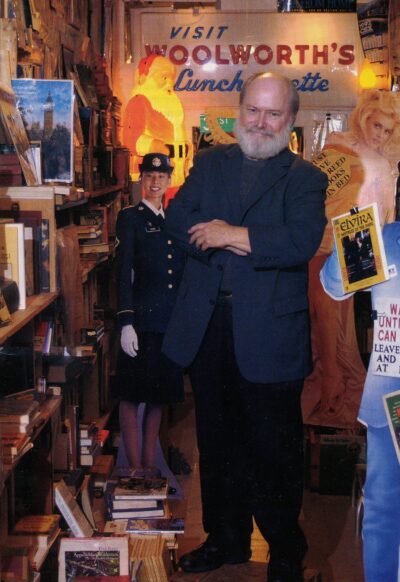 A confessed hoarder, Jim Reed divides people into keepers and tossers, landing solidly in the keeper lane. His quirky collection resembles a combination of a college professor’s office, a yard sale and an old bachelor who was never really housebroken. Spend an hour or two at Jim Reed Books and Museum of Fond Memories in downtown Birmingham, and your senses flood with memories and chuckles. It is serious, too. There is a feeling as you browse the shelves, that his shop holds a significant percentage of the world’s knowledge. Books range from new to five hundred years old. Items range from a giant porky pig head to movie posters, election buttons, vintage toys, and Amazing Spiderman comic books. You can find everything from a life-sized Dorothy from the Wizard of Oz, hoisting a ruby slippers thought bubble, to a rare 150-year-old diary, perhaps complete with old love letters.

“They are treasures to me,” says Reed, who fails to understand how family items, including pictures and letters can be tossed away.

Always a book reader, Reed grew up as an introvert. When asked to recite a poem, life changed. He added theatrical touches, attracting laughter and the compliment of a pretty girl who just then discovered his existence.

“Applause! Girls! It lead me to the stage, where I feel most confident,” Reed says.

For years, he acted in plays for Marian Galloway, whose name rests on the door of a theater at the University of Alabama. A grand friend of Tennessee Williams, she was embedded in the theater elite. Those who acted for her considered themselves fortunate, including Jim Reed. Today, he only acts in the bookstore, where upon entry, you find more of a stand-up comedian, or Southern storyteller, than a retail merchant. Whatever you may pick up in the store was personally selected by Reed, and he can tell you all you are willing to hear about its history and significance. Don’t hesitate to ask, just be sure you have time.

Prior to his bookstore habit, Reed worked as a public relations manager. When he retired after a few decades, he stepped out of his corporate suit and took on the entrepreneurial mantle. As a quote from his favorite author, Ray Bradbury, “Jump off the mountain and build a parachute on the way down.”

At the time, there were only seven book researchers in the country and pre-Internet. He ran a small ad in the New York Times Book Review Magazine. Soon, he was so busy with a mail-order book company, his business had taken over the house. His current inventory of 50,000 books, searchable on his website, and 250,000 items, would overwhelm the average garage.

“My wife said, with a quivering lip, ‘I want my dining room back,’” says Reed.

So, he opened a bookstore. And a museum. His mother was a tactile person, who loved to touch and smell art. He made sure his museum was touchable. And buyable. As much as he may love his Bozo the Clown plastic statue, it can be purchased. The story has a folk artist appeal. Books and stacks of books are everywhere. Interspersed are classic rock and roll albums, old drive-in movie speakers, Life magazines, photos of Marilyn Monroe, old advertising signs and other pure kitsch. 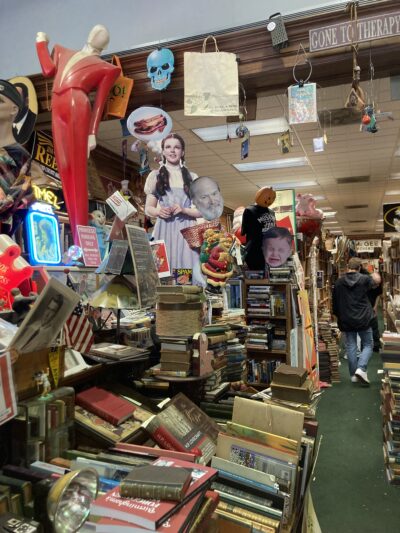 These memories morph into stories, which Reed records weekly in his Red Clay Diary podcast. He has written 20 books, all collections of his curious tales. His latest book is “Christmas Comes But Once a Day.” Christmas dominates the décor of his shop. Giant plastic Santas pop up amid the shelves. A movie-sized leg lamp sits in the window. There is an aluminum tree, tinsel, a plastic sled, and other items generally considered tacky.

“I was born into a tacky family,” he explains. “I love bright and glow-y things and silly gags in the corner. As a hopeless romantic, I see Christmas as the only time of the year that everyone is nice to each other for a few hours. Why not make that every day?”

Beware, there are gags hidden among the shelves. Jim will explain them upon request. Forget thinking of this bookstore as a stodgy, boring place; Reed Books will jettison that thought. Between the character in charge to the whimsical items, it is a place of playful surprises at every turn.