It’s been six months since Fisher’s at Orange Beach Marina was shut down by Hurricane Sally’s 105-mph winds and storm surge, which wrecked the upstairs fine-dining restaurant and put its casual dockside eatery under 2.5 feet of water.

“We lost the roof,” recalls Bill Briand, who has been executive chef at the dual restaurants since Fisher’s opened in 2013. “We needed all new floors. Furniture. All new ceilings. All new paint.”

Longtime fans were past ready when Upstairs, the formal restaurant, finally reopened on March 15. “One [group] came in the first night and ate half the menu,” Briand says. “Then they came back the next night and ate the other half.”

(The Dockside restaurant, which is being rebuilt and expanded, is expected to open in May.)

“Our goal is to be able to tell our guests where their vegetables came from, where our fish was caught, who grows our oysters and why we use oysters from them,” he says.

Briand, whose family settled in New Orleans when he was 13, started building his culinary chops working for famed NOLA chef Emeril Lagasse. After a decade with Emeril, Briand spent another decade with award-winning chefs Donald Link and Stephen Stryjewski at Cochon and Cochon Butcher.

Soon after Briand relocated to Orange Beach and helped open Fisher’s, Southern Living Magazine dubbed it one of the region’s best restaurants. For five years running starting in 2016, Baird has been a semi-finalist for the Best Chef South award from the James Beard Foundation — a streak that will be interrupted only because the foundation suspended award nominations this year.

Briand’s New Orleans influences pop up throughout the Upstairs menu, including crawfish beignets and gumbo made with a deep-dark roux. A daily fish special and swordfish entrée celebrate the Gulf’s bounty. Dishes like quail stuffed with shrimp, eggplant, and cornbread dressing, and Duck Confit with dirty rice and sweet-sour satsuma gastrique are pure southern comfort. 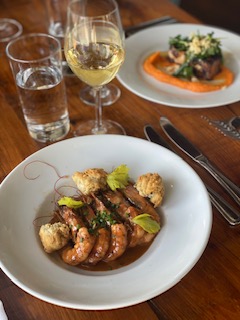 When it returns, the open-air Dockside will remain true to its roots, a casual hangout serving sandwiches, po’boys, burgers, and simple fish entrees. “The Dockside is for people to come off their boats wearing flip flops and bring their kids,” Briand says.

Dockside appetizers like fried crab claws, oysters, and shrimp — or a seafood tower with all three — are invitations to graze while checking out the yachts and sports-fishing boats moored nearby.

Briand also plans a revival of the Southern Grace dinner series, which draws chefs from New Orleans, Alabama, and elsewhere to take over the Upstairs kitchen for a night’s service. Normally held several times a year, Fisher’s only got one in last spring before the COVID-19 shut-downs.

Briand says it’s not unusual to see familiar faces from his past in his adopted home. “A ton of New Orleans people come here during the summer,” he says. “I’m still seeing people I cooked for 15-16 years ago. Now they’re here on vacation.”