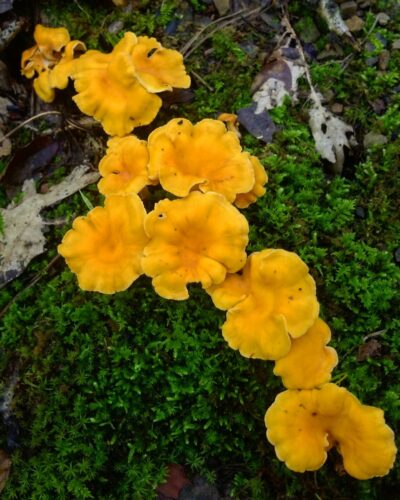 After confirming the fungi are not a toxic or poisonous look-alike, they start gathering the gourmet goods, which can fetch $30 or more per pound from chefs at high-end restaurants or at nearby farmers markets.

But the bounty the foragers gather that day is destined for their own dinner table. Served with other wild edibles picked during the hike, the mushrooms take center stage in the ultimate eat-local meal.

“Chanterelles are one of my favorites and the spark that got me started,” says Tim Pfitzer, an avid forager who lives in Irondale and co-owns a side gig that cultivates gourmet fungi, Magic City Mushrooms. “I love collecting. Even if you find nothing, a day spent foraging is a beautiful day with nature.”

Foraged foods are seasonal by nature. Central Alabama is ending the period when wild watercress plants proliferate in cold springs and morel mushrooms grow in forests.

Early spring brings edible curls of fiddlehead fern and wild onions known as ramps. Chanterelle, oyster, and puffy white lion’s mane mushrooms pop up in May. Sumac and nettle appear next, along with summertime greens that can be found in residential areas like sorrel and bittercress. Juniper berries are a winter harvest.

But for many, wild chanterelles are the grand prize, the blue ribbons at the free food fair. They grow prolifically in Alabama as the temperatures get hot, and just enough rain falls to feed the mushroom’s mycelium base that grows underground in a symbiotic relationship with hardwood trees like oak and hickory. 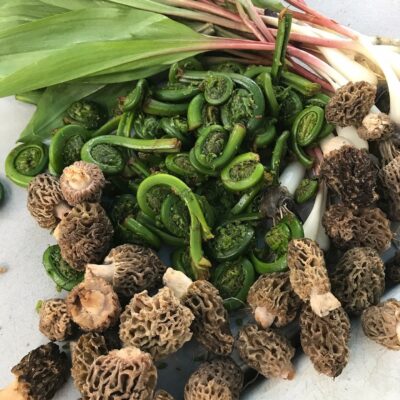 “When I look at rainfall, I don’t just look at the last couple of days,” Pfitzer says. “Chanterelle mushrooms are 2–4 weeks old typically when they are harvest size.”

Pfitzer says he likes the signs he’s seen in this spring’s rains. “Last season was a particularly wet year,” he says. “We handled just over 3,000 pounds of chanterelles.”

The first pins—emerging mushroom fruits—should sprout around mid-May in central Alabama. The season starts a bit later in north Alabama. Chanterelles can be found year-round in the southern part of the state.

Pfitzer’s passion for foraging started while working in the kitchen at Frank Stitt’s Birmingham bistro, Chez Fonfon. When chanterelles appeared as a late-spring special, the avid outdoorsman recognized them as the same orange mushrooms he’d noticed on earlier hikes in the woods.

On a cook’s pay, Pfitzer couldn’t afford the seasonal delicacies he prepared at the restaurant. “But when I realized those mushrooms were out in the woods,” he says, “I could afford to go collect them.”

Pfitzer, whose current day job is in sales with a seafood distributor, is certified to sell his foraged mushrooms to the public. When available, they’ll pop up on the Magic City Mushrooms stand at the Pepper Place Saturday market, along with the locally cultivated gourmet mushrooms that partner Ken Moore grows for MCM. 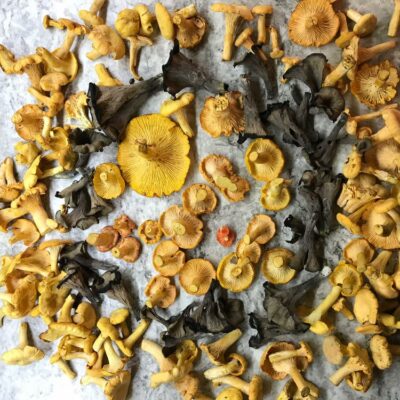 When hunting wild mushrooms, knowing what you’re doing is crucial. Edible fungi can be mistaken for similar-looking ones that will at least make you sick, if not deal death.

Learn to safely distinguish between the two by taking classes with groups like the Alabama Mushroom Society. With sufficient photos, AMS members can also help confirm the identity of a mushroom for foragers in the field.

There are other dos and don’ts: When you go out, get off the beaten path for best results. Stay off private property without permission and avoid public preserves altogether. Selectively harvest; don’t grab everything in sight.

But while experienced foragers love sharing knowledge, they don’t readily spill all their secrets, especially when it comes to “honey holes.”

“That’s a place you never take anybody else,” Pfitzer says. “The B-grade spots are where we take the mushroom clubs and do our foraging classes. They’re fine. But the A-plus spots, where you can literally collect 100 pounds in a day, those are your trophy spots that you prize and keep private.” 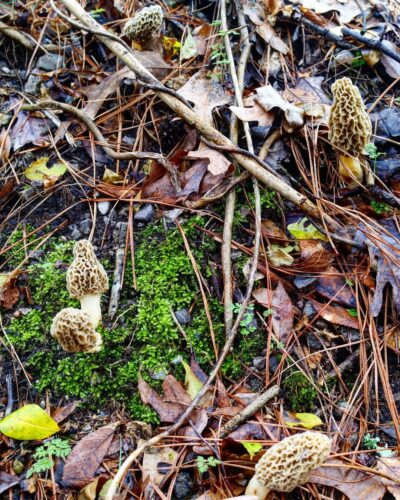 For more on foraging check out:

Meets monthly for field trips; its Facebook page is focused on identification of and uses for wild plants and mushrooms in the northern part of the state.