Go fossil hunting in Alabama at Union Chapel Mine

She was only five years old when she tentatively toddled over to the paleontologist to show him her dinner-plate sized find. He leaned in with a smile of patience, assuming it was just a rock. He flipped up his sunglasses for a better look. The fossil hunt was 20 minutes in and the smallest child had picked up a museum-quality fossil. It was an Attenosaurus track, called a “coal lizard.”  These giant ancient reptiles spanned from six to eight-feet long and dominated swamps as the largest land animal before the dinosaurs emerged.

“There are no dinosaurs at the Union Chapel Mine, but these fossils are rarer than dinosaur bones,” says Carl Sloan, secretary of the Alabama Paleontological Society and leader of the Fresh Air Family field trip.

Officially named the Steven C. Minkin Paleozoic Footprint Site, this former strip mine in Walker County has been rated as the most important Coal Age footprint site in the world by international experts, according to Congressional findings. These findings resulted in saving the Union Chapel Mine from being covered over by the Mining Reclamation Act. The site has produced thousands of tracks, some new to science, and the largest collection of specimens documenting these animals. It’s the number one site for vertebrates and the most prolific source of tracks left behind by the earliest reptiles on earth.  Scientists from around the globe are attracted to the site for its abundance of fossils and the biodiversity of what was an ancient swamp teeming with terrestrial and aquatic life. 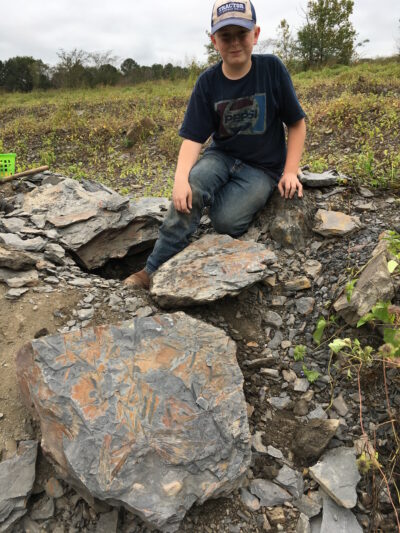 The fossils are so abundant, that a small child can pick up a rock and find a rare track. A 10-year-old boy found a cluster of trilobites. A 12-year-old boy, Camden Davis, made news by unearthing evidence of the entire life cycle of an ancient seed fern, which went straight to a museum. The finest piece was found by Cindy Wallace, a mom who was watching her fossil-fanatic son hunt from pile to pile. She looked at the slab beside her and pulled it up, revealing seven hand-sized prints of the Attenosaurus.

“This is the largest find I know of,” said Jim Lacefield at the time of the find. He is the author of “Lost Worlds in Alabama Rocks.”

Groups such as universities and education programs such as Fresh Air Family take students and families to the site. School field trips and family weekend adventures offer a chance for amateurs to participate in scientific discoveries. The Alabama Paleontological Society organizes monthly hunts. Everyone keeps their fossils unless they are museum-quality, in which case they generally go to the McWane Science Center in Birmingham or the Alabama Museum of Natural History in Tuscaloosa.

The original discovery of the site was made in 1999 by Ashley Allen, a high school science teacher in Oneonta. He announced to his class that he would like to take them on a fossil field trip to a coal mine. A student raised his hand to offer a mine owned by his grandmother. When Allen scouted the site, he found the tracks resembling a tiny truck, which turned out to be rare arthropod tracks.

The Union Chapel Mine was a strip mine, pulling out layers of coal. According to national law, it was due to be reclaimed, which would have covered up the fossil record. Allen and Steven Minkin lead the charge to save the site. It literally took an act of Congress. Now owned by the State of Alabama, it takes special permission to explore the site.

The ancient swamp forest would have looked much different from today’s swamp. The trees were more like tall ferns, with green-scales for bark and leaves at the top. Some rose to 150 feet and were extinct by the time dinosaurs came looking for vegetation. Beautiful fern fossils are the easiest finds in the rock piles at the former mine. With low oxygen and high acidity, the waters did not break down the plant material, leaving finely chiseled remnants of delicate leaves.

While the large amphibians offer the showiest fossils, the site is famous for its fish, especially the horseshoe crab. Here is the only record of its life-cycle in the time period.

While tracks do not reveal what the whole body looked like, it can reveal size and behavior. It tells us if they congregated. Or lived solitary lives. What did they do when they met other creatures? Or, were they avoiding something that might eat them.

While the scholars might debate the lives of creatures from long ago, fossil hunters can enjoy the ease of the hunt. Literally, almost every rock captures a footprint or a plant. Those with patience can sort through piles to find treasures. Others split rocks to see what might be hidden inside. Whatever is found is a unique glimpse into an ancient world.