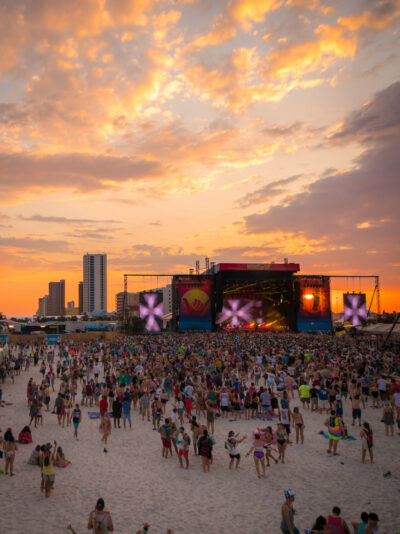 After a two-year hiatus due to COVID-19, the Hangout Music Fest is making its triumphant return this weekend from May 20–22. The annual three-day music festival has been held on the white sand beaches of Gulf Shores, Alabama since 2010. Every year, thousands of music lovers from across the country (and even the world!), flock to Alabama to see their favorite artists perform in a truly one-of-a-kind atmosphere. The entire affair is essentially a giant beach party hosted by top musical performers. I mean, where else can you see Grammy award-winning artists play their top hits while you’ve got your feet in the sand and a clear view of the blue-green ocean? Here are three things not to miss if you’re lucky enough to be headed to Hangout this year.

Talk about star-studded talent. This year’s list of headliners is almost too good to be true. Friday night kicks off with headlining performances from Post Malone and Zedd, plus country superstars Maren Morris and Kane Brown. For a bit of early 2000s nostalgia, the festival has also brought in punk band Fall Out Boy to make all our middle school dreams come true. Saturday follows with an equally impressive lineup including Halsey, Doja Cat, Illenium, and Leon Bridges. Finally, Sunday closes out the big show with performances from alternative artists Tame Impala and Phoebe Bridgers, electronic group Louis The Child, and rappers Megan Thee Stallion and Jack Harlow.

With 70 different artists slated to perform this weekend, there’s more to hear at the weekend-long affair than you could ever pack into just three days. If you’re having a hard time whittling down your personal listening schedule, we recommend prioritizing Alabama artists who will be holding homecoming performances this year. Flo Milli, a rapper from Mobile who burst onto the hip-hop scene in 2015, will perform Saturday, as will indie-alternative rock band Moon Taxi. While the band is technically now based in Nashville, they got their start right here in Alabama, when lead singer-guitarist Trevor Terndrup and bassist Tommy Putnam played in a band called Apex together while high school in Birmingham. Similarly, The Brook & The Bluff, made up of high school friends from Hoover High School (the bluff) and Mountain Brook High School (the brook) in Birmingham, will perform at this year’s festival on Sunday. Finally, don’t miss pop-punk artist Zach Hood, who blew up on TikTok last year but got his start in Alabama, and even formerly worked at The Hangout. 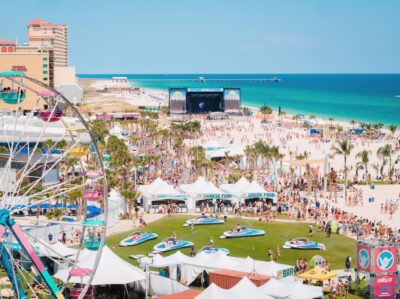 While Hangout is about the music, it’s also about providing a one-of-a-kind experience. That’s why Hangout offers a dozen additional ways to make the most of the sun, surf, sand, and unmatched vibes of a giant beach party. At Corona Beach, play sand volleyball, grab a cold drink, or cool off with a dip in the ocean. The Malibu Beach House has its own lineup of DJs dropping beats all weekend long. Camp Hangout is the summer camp you always dreamed about with a slip-n-slide, kickball, crafts, s’mores, and more. For some throwback fun, check out the Roller Disco where you can rent skates and hit the rink. And when you need a minute to breath from all the excitement, head to the Tropical Spa for a massage, hairstyling session, or Hydration IV treatment. You can also recharge under a canopy of palms at Hammock Beach. Did we mention there’s also a ferris wheel?

Ready to book a last-minute trip? Tickets are still on sale, here!