How an organ saved the Alabama Theatre 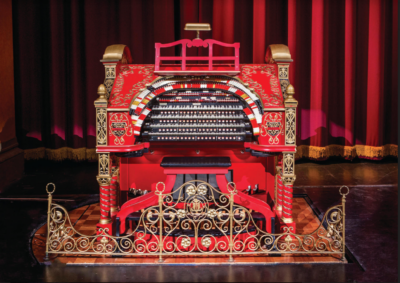 “We were just stupid enough or crazy enough to think we could actually do it,” says Gary Jones, president of the Alabama Theatre Organ Society. “We knew we had to do it.”

To most of us, the Alabama Theater is a masterpiece of Moorish design, velvet seats, and a massive stage. It is where we go to see movies or bands, dance recitals, comedians, and weddings in the glamorous setting.

Others see a beautiful organ rising up from the floor. An instrument of physical and musical beauty. An irreplaceable instrument. Something worth saving.

The Alabama Theatre Organ Society was happily maintaining their crown jewel, the Mighty Wurlitzer throughout the 1970s and the early 1980s. The reward for their hard work was the opportunity to touch the magic keys of that powerful instrument. Their work was self-funded with a spring and fall organ concert. The Alabama Theatre managed to stay a first-run movie theater throughout the 1970s in spite of the waning fortunes of Birmingham’s once-vibrant downtown in the next decade.

Hopes were raised in the mid-1980s when a development group purchased surrounding properties and the Alabama Theatre, with intentions to make the Alabama the keystone. Unfortunately, their plans failed and the money ran out. Pushed into bankruptcy, the Alabama stood in the path of the wrecking ball. 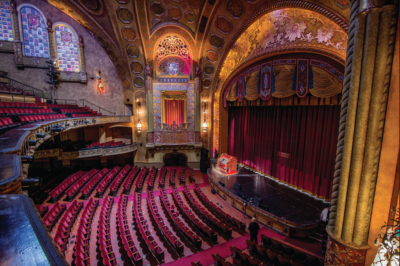 At one time, there were 73 theaters in Birmingham’s historic theater district: the Princess, the Strand, Rialto, Galax, and Franklin. A movie-loving city, Birmingham was second only to New York to show the first talkies. The Marvel Theater had a hand-cranked phonograph for sound to accompany the hand-cranked movie reel. All had been reduced to rubble and new buildings stood in their place. The only ones left were the Alabama, Lyric, and Carver. At least those remained—most American cities lost their grand movie houses.

To prevent the inevitable, the organ society appealed to the bankruptcy judge, pleading for permission to at least save the Mighty Wurlitzer. He refused. It was all or nothing. The organ society would have to buy the whole building.

There were around 80 members of the organ society, 30 who were active, and about 10 who did the work, according to Jones, who was on the board of directors at the time. The plucky group of organists partnered with the Birmingham News. They ran ads that promised for a $25 donation you would get your name in the paper and a T-shirt that said, “I helped save the Alabama Theatre.”

The T-shirt money raised enough to pay off the taxes. That left the $686,000 mortgage to be assumed by the small organization. They formed Birmingham Landmarks, Inc. a separate non-profit to manage the theater, and now other historic buildings.

“Assuming the mortgage was easy, maintaining the mortgage and paying the power bill was tremendous. We had to hustle to put on shows as it was a self-sustaining endeavor—no city or state money. It was a roll of the dice to see if the event that day made money. We seemed to either make money or lose our shirt,” Jones says.

Fortunately, there were enough people in Birmingham with fond memories of the Alabama. Thousands of them came together to raise enough money to save the theater and of course, the Mighty Wurlitzer. Today, the Alabama stays busy with bookings. The only two promotions put on by the theater itself are the summer and holiday movie showings. The “Sound of Music” will soon be seen in the summer schedule, just like when it first danced across the Alabama screen in 1965, thanks to the Mighty Wurlitzer and its mightier organists.