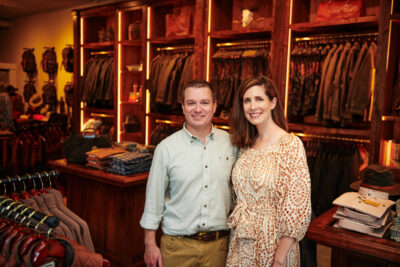 It all started with the search for the perfect jacket. As an avid outdoor sportsman and attorney, Radcliff Menge often found himself caught between two worlds. There was the country, where he developed a passion for hunting and fishing as a child, and there was the city, where he worked as a mergers and acquisitions lawyer in New York. Equally comfortable in both environments, Menge sought a piece of outerwear that was similarly suited to both.

Around the time Radcliff began mulling over a transitional jacket that wore well in the woods and during the workday, he and his wife Mary were thinking about moving back down South. For Mary, who grew up in Brewton, Alabama, the Heart of Dixie was a natural choice. For Radcliffe, who was raised in Winchester, Virginia but spent many holidays and summers in Mobile visiting his grandparents, Alabama also seemed a good fit. Both attorneys had worked professionally in Birmingham, so in 2013 they chose the Magic City as their new home.

By the time the Menges made their big move, Radcliff still hadn’t found that perfect jacket. So, he set out to make one himself.

“He was still mulling that over and hadn’t really found a solution,” his wife Mary remembers. “He ended up working with a patternmaker he found on the internet to develop a jacket with all the features he wanted.” 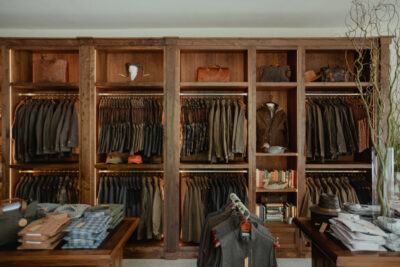 The result was the Tensaw Jacket, a timeless wardrobe staple that’s made to be both functional in the field and stylish in the city. The waxed canvas jacket features a tailored look but has a bi-swing back and gusseted underarms for full-range of motion. A stand-up collar, large front pockets, and several handwarmer and hidden pockets make it ideal for chilly mornings on the hunt.

It wasn’t long after Radcliff started sporting his custom coat that family and friends began begging for their own. The first batch of jackets came out in 2015 and Tom Beckbe was born. In 2017, Radcliff quit his job to pursue Tom Beckbe, his new line of men’s outerwear and sporting wear, full time. By the end of that year, the brand’s Kingsman vest was named a runner-up in Garden & Gun’s Made in the South awards, and the rest is history.

“It’s been an organic growth,” Mary says of Tom Beckbe’s evolution. “We think about the customer who would want a Tensaw jacket and then work out from there. What kind of shirting would that person want to wear? What kinds of bags would they want? If they’re going hunting, we want to be able to outfit them head-to-toe with all the necessary gear.” 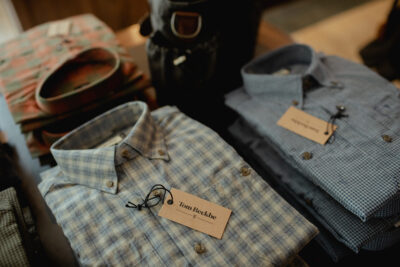 Though Radcliff was the primary customer for their very first product, Mary says Tom Beckbe now serves sportsmen and non-sportsmen all over the country. With every new item the brand puts out, whether that be a hat, vest, gun sleeve, or shooting gloves, their customers are their ultimate inspiration.

Tom Beckbe (the name is a simplification of the Choctaw pronunciation of the Tombigbee River) is a brand fully devoted to honoring its Alabama roots. The lining of each jacket is dyed to resemble the color of Alabama red clay. All materials are designed specifically for the climate and humidity of the Southern outdoors. Mary says Tom Beckbe’s authenticity is what sets it apart.

“We are really dedicated to showcasing the sporting culture of the South,” she says. “Almost all of the photography and videography we use are real people enjoying real hunting experiences in the outdoors. I think what’s really resonated with people is seeing something familiar to them but presented in a beautiful way.”

From the product perspective, Mary says it’s all about durability and timelessness.

“A lot of people say that our outerwear pieces remind them of jackets their grandfathers hunted in, and it feels like the type of apparel they could pass down to their children. That’s a very Southern sentiment. We showcase a tradition that’s sentimental to a lot of people, and the products themselves are heirloom quality, so they’re meant to be worn and passed along.” 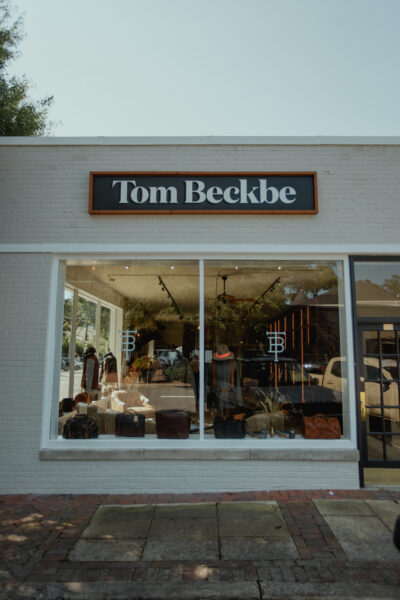 In late August, Tom Beckbe reached another milestone with the opening of a flagship retail store in Mountain Brook. Mary says when the space became available, they jumped on the opportunity to bring their creations to life all in one space—and in their hometown.

“It’s been really fun to see it all in its best light and see customers interact with it all at once and to really tell the brand story in that way,” she says.

Mary, who also quit her career as an attorney to prioritize Tom Beckbe, says though the decision wasn’t one they made lightly, it seemed the obvious choice.

“It was a choice between keeping the business the size it was or seeing where it could go,” she says. “For us, it seemed like a bigger decision to turn down business opportunity. I think looking back and being regretful of not seeing where it could have gone would have been the bigger decision. We decided to go all in, and we obviously care a lot about where it’s headed.”

Tom Beckbe outerwear, accessories, and apparel can be found online at tombeckbe.com, at retail locations in Birmingham and Wilson, Arkansas, and at men’s specialty stores across the country.