Imagine a 200+ mile greenway system connecting all of North Alabama–from the bustling towns to the tucked away hidden gems–along an uninterrupted outdoor human highway, brimming with nature, activity and, most of all, heart. 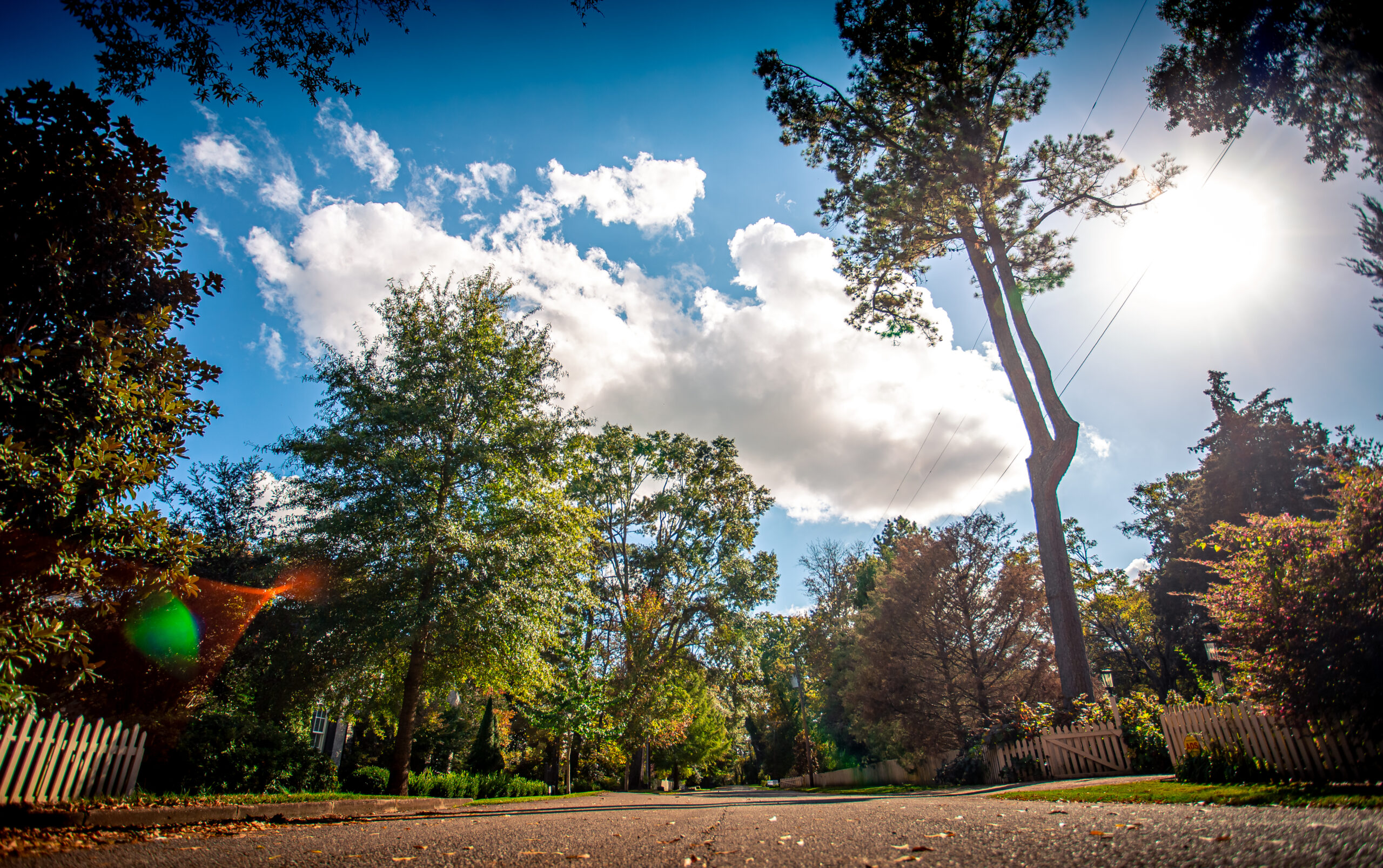 You won’t have to imagine it much longer.

In an act that can best be described as penning a love letter to North Alabama, the Singing River Trail will be all of that and more once completed, connecting one town to the next, bringing communities together to experience, enjoy and celebrate the region’s most breathtaking natural resources.

Spanning eight counties and 25 towns, the non-profit was developed in 2018 by the Land Use Committee of Launch 2035 as a “resource to connect the region, celebrate Native American Heritage, provide educational opportunities, contribute to economic development and enhance the quality of life for residents and visitors throughout North Alabama.”

What began as a 70-mile trail across three counties quickly grew to the master plan laid out today, which, when completed, will exist as an expansive greenway space, running from Bridgeport, down to Guntersville, through Huntsville and as far west as the Shoals; picking up many of the most beautiful small towns along the way.

It’s these small towns that are the backbone of the Singing River Trail; towns that may not have a thousand residents, a traffic light or a school within city limits, but boast thriving family-run farms, annual events the entire town attends and hole-in-the-wall restaurants that serve the best fried catfish you’ll ever taste; towns many Alabamaians might not even know exist. 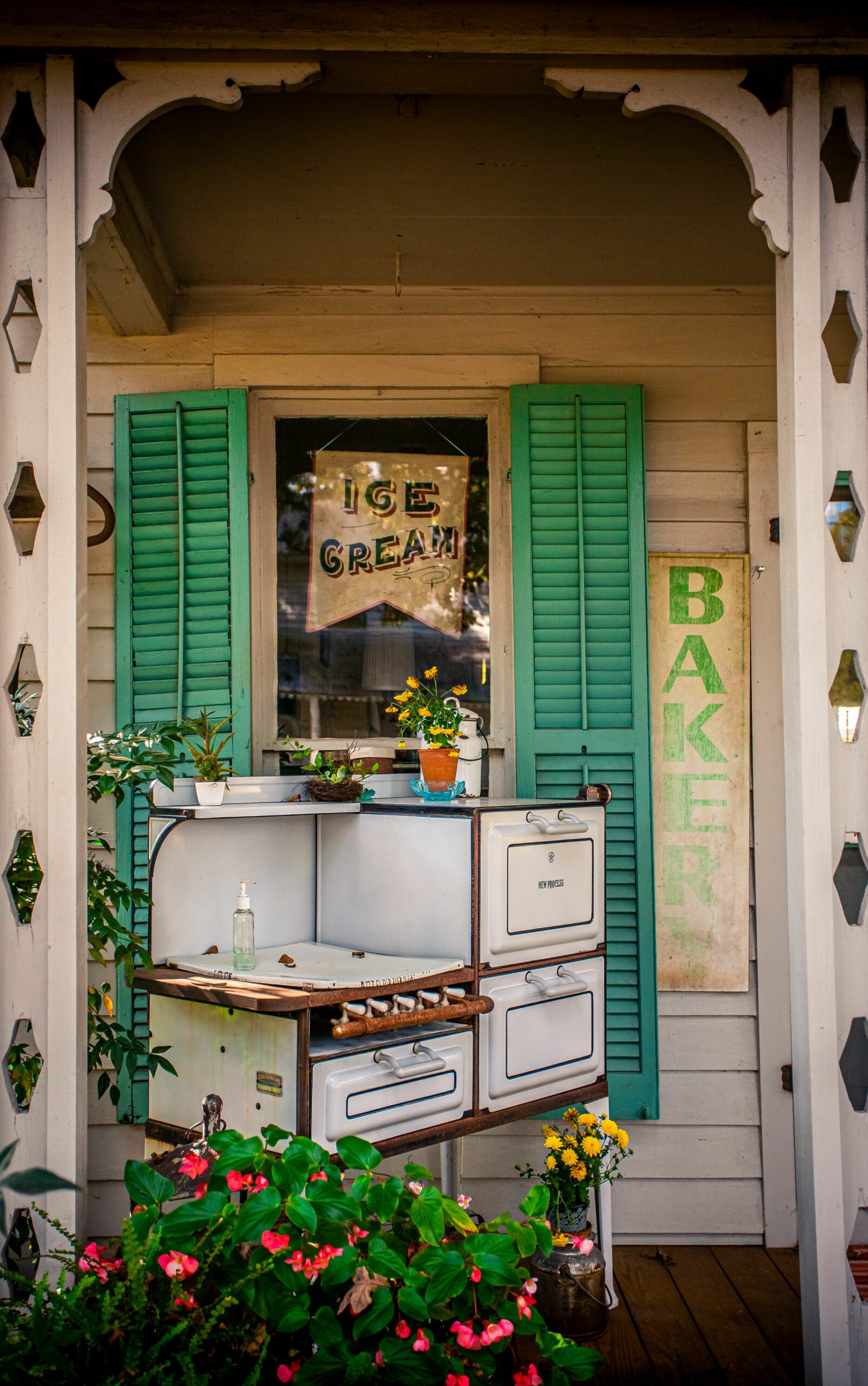 While researching the SRT, I joined executive director John Kvach on a tour of some of the small towns that will be included on the trail. Our first stop was Mooresville in Limestone County, population 56. If it’s not the smallest, cutest town in Alabama, I don’t know what is. Mooresville has a tavern, a tiny post office, an old church that is now used as a meeting hall and wedding venue, and some of the nicest people on the planet. We talked with the McCrarys, sixth generation Mooresville residents and owners of  1818 Farms, a well-known, well-loved business throughout Alabama and the entire U.S.

“This trail will bring another level of awareness to our town,” Laurence McCrary told me. “And I can’t wait for the spotlight to shine on the other businesses we have here; for this trail to help celebrate all of us who make Alabama what it is.” 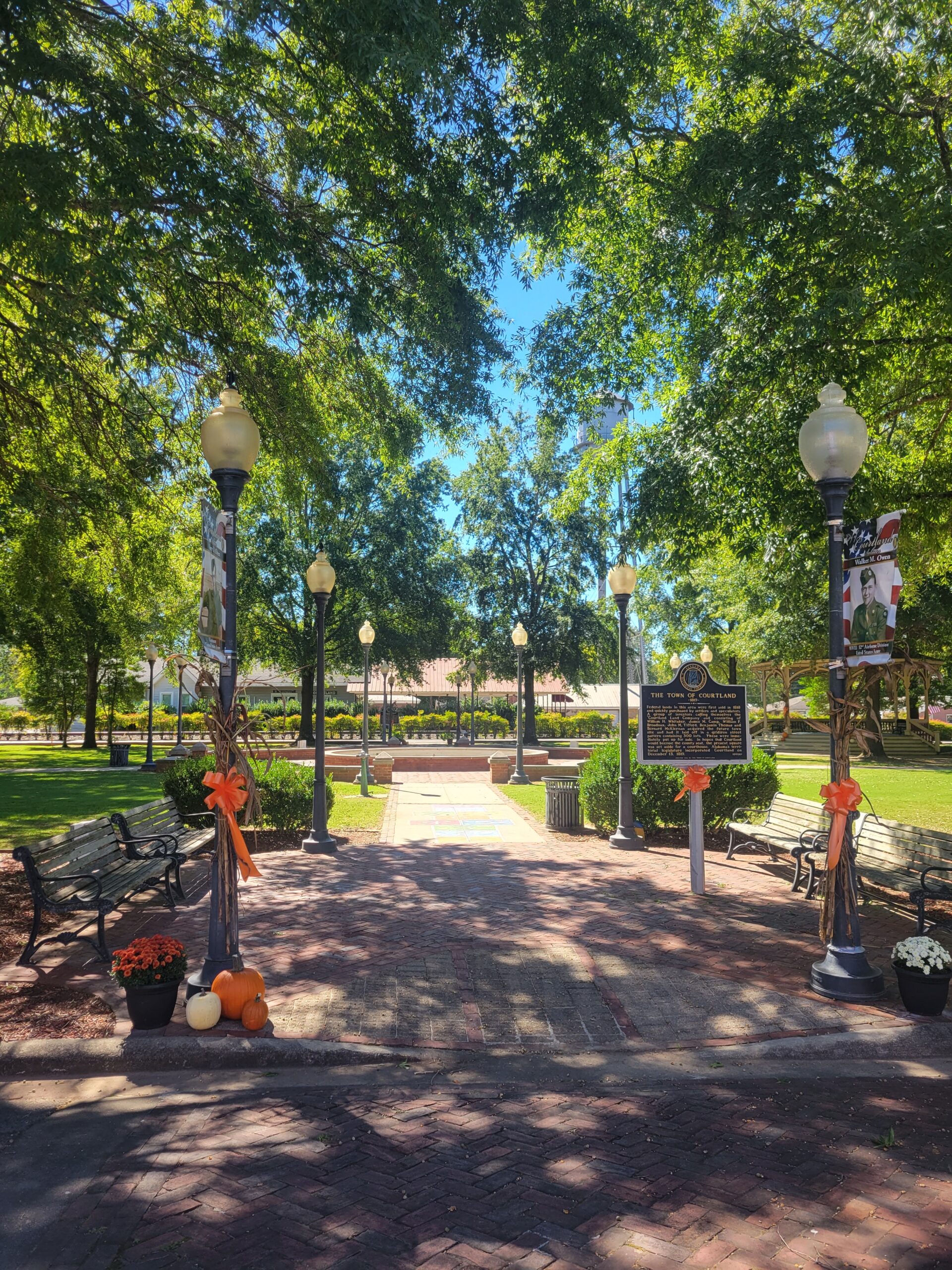 Our next stop was Courtland in Lawrence County, a once-bustling, pre-Civil War town on the train line, until businesses in the downtown area were lost to the bypass in the late 1980s. Think Radiator Springs in the Disney movie, Cars. Mayor Linda Peebles can recall a time when downtown was the place to be and she hopes the Singing River Trail will help revitalize Courtland by bringing back businesses, shops and restaurants.

“We’re hoping to engage business owners in the downtown area again,” she said. “It’s a great little town and I hope we can make it an even better little town with the trail running through it.”

Just last month, SRT and the Town of Courtland partnered together with Sonya R. Clemons, The Art Lady, to create the first internationally-sanctioned hopscotch court in Alabama in the idyllic downtown area. As I skipped and hopped my way through the course, I got a real Gilmore Girls Stars Hollow vibe… and I could almost see the town bursting to life around me. I can already tell Courtland is going to be a very popular stop on the trail. 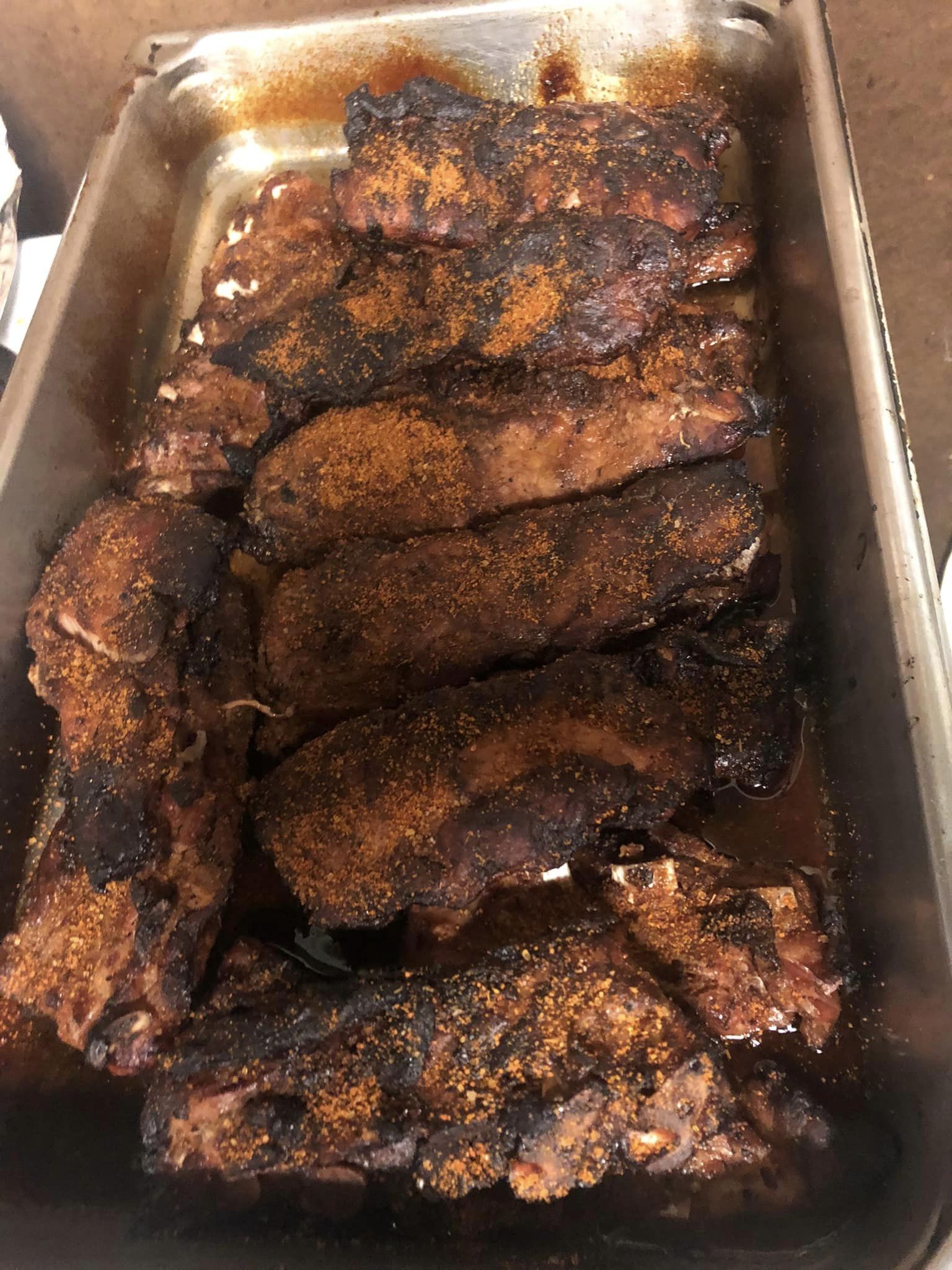 Our final stop was the whistlestop town of Leighton (pronounced Lee-ton) in Colbert County, population 789. We were famished by the time we arrived, so we made the best decision of the day and stopped to eat at F & D’s Soul Food & BBQ in the old Town Hall building. The cozy restaurant featured fantastic service and even better food; the definition of a home-cooked meal. I polished off my mouthwatering fried catfish, collard greens and fried potatoes with a delicious lemon cupcake, made from scratch by our server. I already have plans to return to Leighton with my family and F & D’s will be our first stop; and probably our last, too.

The mayor of Leighton, Derrick Silcox, met us there to chat about the $1 million Transportation Alternatives Program (TAP) grant they received to redesign the one square-mile, two Main Street blocks of downtown to make it SRT compliant as they connect to the trail and make it a safer space for pedestrians; to “defy expectations and be better than before,” according to the mayor, while still keeping the “authenticity” of the beloved town. 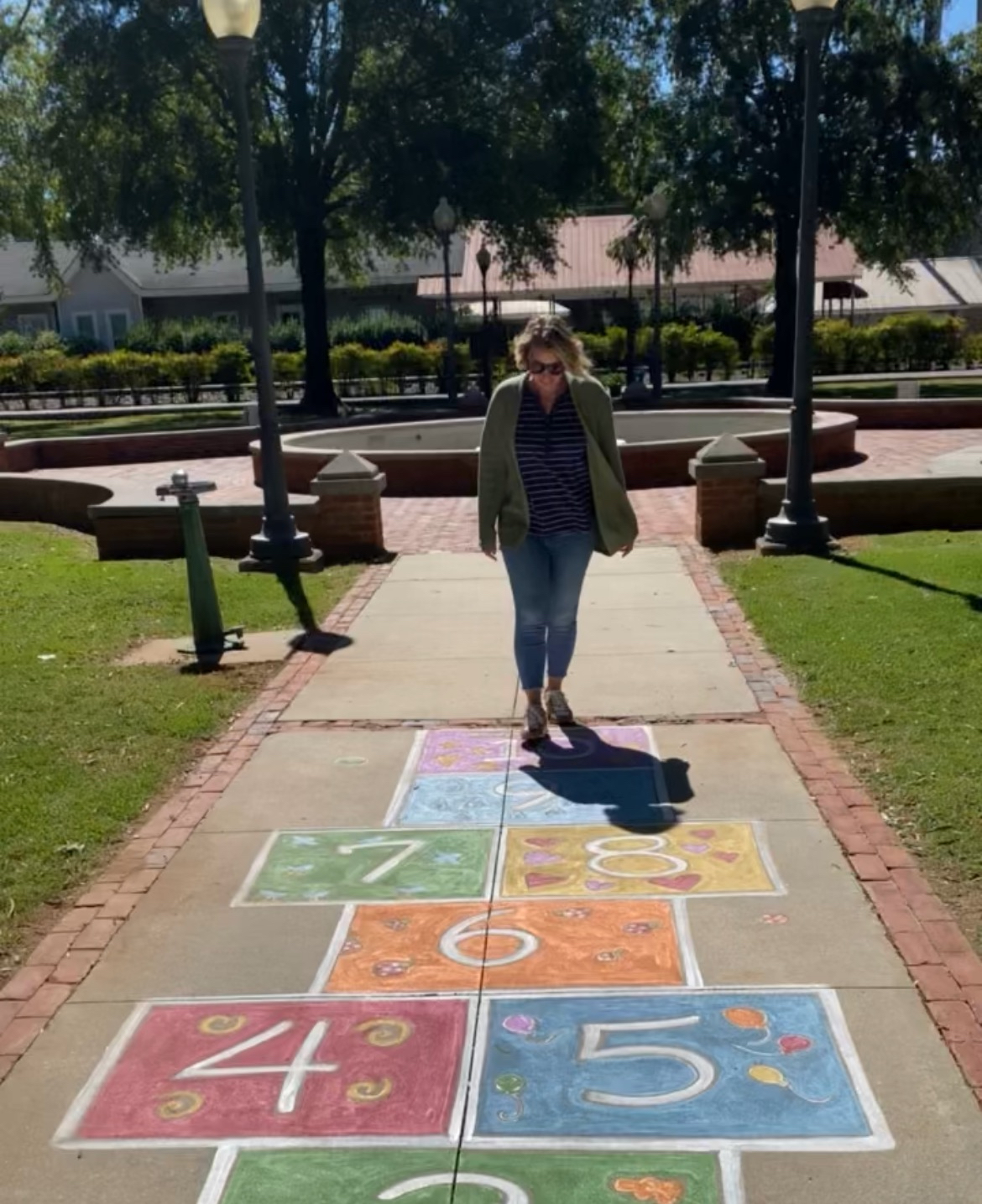 With love, the Singing River Trail (and a writer who fell in love with the SRT)

By being able to access nature and enhance lifestyles through a connective greenway system, the Singing River Trail is writing its love letter to North Alabama. But it’s the communities and towns on the trail that are writing their own letter of adoration to the Singing River Trail; it’s the heart and soul of North Alabama, which will soon be showcased like never before.