How to plan the perfect Alabama tailgate

Legend says that the first tailgating party before a college football game was in 1869, but it wasn’t until after the University of Alabama first hit the gridiron a couple of decades later that its rabid fans perfected the art of the pregame party.

For seven home-game weekends this fall—starting with the Crimson Tide’s Sept. 11 matchup with the Mercer Bears—the top social event of the season is marked by Saturdays spent on and near the Quad in Tuscaloosa. 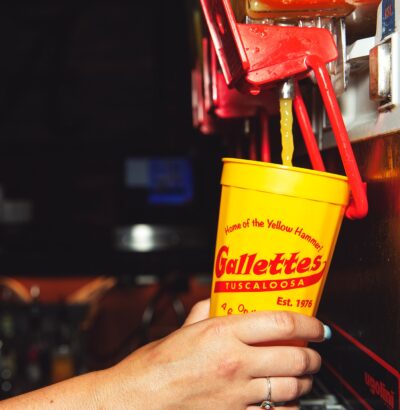 Bama tailgating even has its own adult drink—the Yellowhammer, a potent, sweet mix of amaretto, vodka, rum, pineapple juice and orange juice that can be batch-made. If you don’t mix your own, Gallette’s on the Strip in T-town is the place to go to sample at least one.

Although reserved spots are available (fleetingly), most tailgating spaces on the campus are first-come, first-serve. Folks are allowed to set up starting at 6 p.m. Friday. Electricity is provided (no generators), but the school cuts the power 90 minutes after the game ends.

Many tailgate parties crank up around 8 a.m. Saturday, regardless of kickoff time, so it’s not unusual to find tailgate tents that start out serving breakfast before cranking up the grills for lunch.

Smoked meats and sides rank No. 1 at Bama tailgates. After all, the Tuscaloosa area is barbecue heaven. 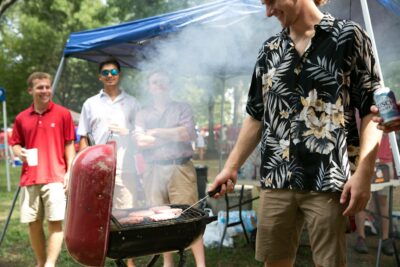 They’re both among the best anywhere, says Southern Living magazine. It recently ranked Archibald’s 9th and Dreamland 12th on its list of the 50 best barbecue joints in the entire South.

Some tailgaters coming in from greater Birmingham also stock up at Bob Sykes’ Bar-B-Q, off Interstate 20/59 in Bessemer. Eating its barbecue at Bama games is a tradition that dates to the 1950s when Bob and Maxine Sykes, before opening their restaurant in Bessemer, first started serving pit-cooked pork outside Birmingham’s Legion Field, where Alabama once played all of its “home” games.

The folks at ESPN, the sports network that has broadcast a Bama game or two, also recommend stopping by The Waysider for breakfast, FIVE restaurant for brunch, The Oasis for burgers, and The Houndstooth for game-day drinks.

Other popular eateries for an immersive Bama experience include Rama Jama’s and Nick’s Original Filet House (aka Nick’s in the Sticks).

Local breweries Druid City and Black Warrior throw their own in-house tailgate parties, plus sell beers to go. Or check out the “Crimson Crowlers” at Loosa Brews, 32-ounce cans of portable draft beer served from its 63 taps.

You don’t have to know all the words to the Rammer Jammer Yellow Hammer cheer to fit in on gameday at the University of Alabama. Just get started with some ‘cue and some brew.