How to see the Cahaba Lilies in bloom this year

If the camellia weren’t Alabama’s state flower, we’d be the first to recommend it be the Cahaba lily. This rare flower only exists in three states: Alabama, Georgia, and South Carolina—and only for about one month out of each year. With a short blooming season, running roughly from Mother’s Day in May to Father’s Day in June, the moment to catch them is fleeting. If you’ve never had the chance to see these gorgeous natural beauties in person, now’s the time to start putting together a plan to see them. 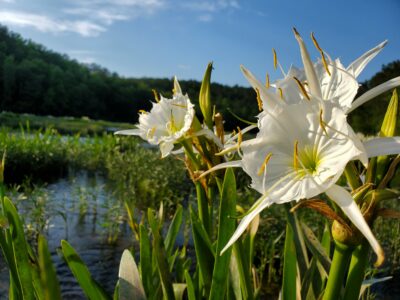 What are the Cahaba lilies?

Cahaba lilies are a type of spider lily belonging to the amaryllis family. The aquatic flowering plant is known for its 3-inch-wide white blooms, as well as the unique environment they require in order to thrive. Cahaba lilies, known as shoal lilies outside of Alabama, can only grow in swift, shallow water with plenty of rocks and direct sunlight. Grown from bulbs that take root in the cracks of rocky shoals, Cahaba lilies are a tenacious species that can grow up to 3 feet tall, but ironically their blooms last for only 24 hours.

Much of what makes Cahaba lilies so special is their rareness. Currently, only about 50 populations of Cahaba lilies exist, with the largest concentrated in three areas: the Cahaba River in Alabama, the Catawba River in South Carolina, and the Flint River in Georgia. As such, the species is being considered for protection under the Endangered Species Act.

Where can you see them?

For locals who haven’t yet seen the Cahaba lilies, they’re definitely worth a bump to the top of your spring bucket list. Luckily, there are several places along the Cahaba River to seek out the beautiful blooms. The largest population of the flowers are located in the Cahaba River National Wildlife Refuge in Bibb County, just six miles east of West Blocton. Another population can be found at Helena’s Buck Creek in Shelby County.

The refuge typically runs canoe tours offering participants the chance to learn more about the lilies and see them firsthand. Unfortunately, this year’s tours have been cancelled due to COVID-19. However, the Cahaba River Society is offering five chances to take a guided canoe trip to see the lilies in May and June if you make a $40 donation to the nonprofit. If you’d rather venture out on your own, Canoe the Cahaba and UAB’s Outdoor Pursuits Adventure Recreation Rentals are good places to consider for canoe and kayak rentals.

If you can’t get enough of the spectacular flora, West Blocton has been hosting a Cahaba Lily Festival on the third Saturday in May since 1990. The annual festival includes trips to see the lilies, as well as nature presentations, music, storytelling, and food. Though an in-person gathering won’t be part of this year’s agenda, the festival will take place as a livestream program on Saturday, May 15. 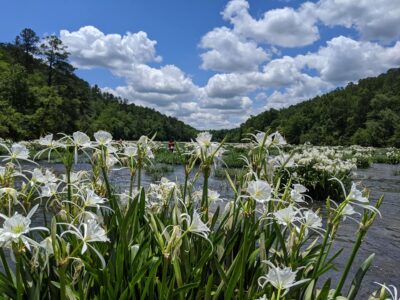 How to spot them?

For more information on Cahaba lilies and how to see them, head to cahabalily.com or cahabariversociety.org.