How to spend a weekend in Huntsville, Alabama

Huntsville may be best known as the Rocket City, home to both the NASA Marshall Space Flight Center and the U.S. Space and Rocket Center, but lately a lot more than just rockets have been taking off in the state’s fastest growing city. With a thriving arts and culture scene, a plethora of local breweries and restaurants, plus new developments and entertainment districts popping up every day, there’s a lot more to Huntsville than you may remember from grade school trips to space camp. Whether you want to take advantage of Alabama’s gorgeous outdoor features, spend an afternoon shopping, or take a food tour of town, there’s plenty to do when spending a weekend in Huntsville. Here’s your guide to exploring this North Alabama gem. 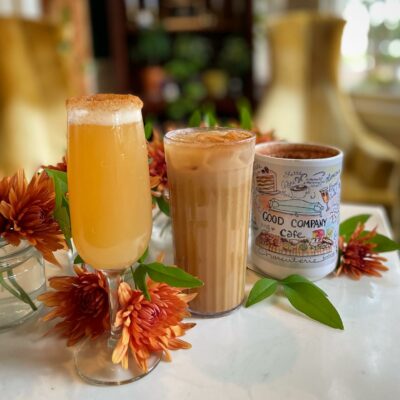 Fuel up for a day of exploring the city with breakfast at Blue Plate Café, a down-home eatery specializing in big Southern breakfasts. We’re talking biscuits and gravy, grits, country fried steak, giant pancakes—the works. On Saturday mornings, be sure to order a Cocoa Biscuit, a hot biscuit served with a pad of butter and smothered in made-from-scratch chocolate sauce. If you’re looking for something a little lighter, pick up a pastry at family-owned, small-batch bakery The Moon Bakeshop. We recommend a cruffin (croissant dough rolled in sugar and filled with almond pastry cram) or bacon cheddar scone. To get your java fix, try Angels Island Coffee, Dark Side, or Good Company Café.

When it’s time for lunch, try a progressive dining experience at Stovehouse. Built on the bones of the century-old Martin Stove Factory, Stovehouse is an open-air entertainment venue that incorporates places to eat, drink, shop, and unwind with live music, big-screen TVs, yard games, and special events. One of the best things about Stovehouse is the incredible diversity it offers with dining options ranging from authentic Japanese ramen to modern Mediterranean, street tacos, Alabama barbecue, New York-style pizza, and more. 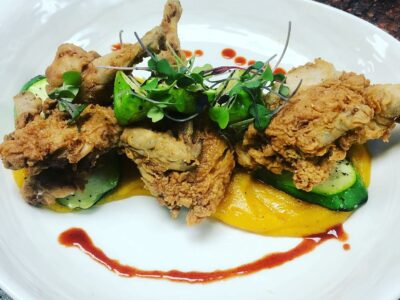 For dinner, choose your adventure between an underground Asian-fusion tiki spot or Southern American fine dining. Located in the heart of downtown Huntsville, Phat Sammy’s keeps things interesting with a menu of creative Asian-inspired eats and off-the-wall tiki cocktails. The eclectic basement-level restaurant gives major laidback island vibes, but the food is no joke. The Chinese Chili Dawg is topped with mapo tofu, pickled mustard greens, and Szechuan peppercorn. Fried rice gets a makeover with the addition of crispy Spam and the Phat Fries pair hand-cut spuds with sweet Chinese sausage gravy, cheese curds, fried chicken, and kimchi hot sauce. Meanwhile, Cotton Row is all about history, elegance, and a Southern approach to modern American cuisine. Housed in a three-story brick building dating back to 1821, Chef James Boyce’s Cotton Row is a Huntsville institution. The menu changes seasonally, but be on the lookout for dishes that feature traditional Southern ingredients like the Buttermilk Fried Quail with crispy parsley, lavender honey, and Cotton Row hot sauce and the Jumbo Lump Gulf Crab Cake with winter citrus and Old Bay aioli. 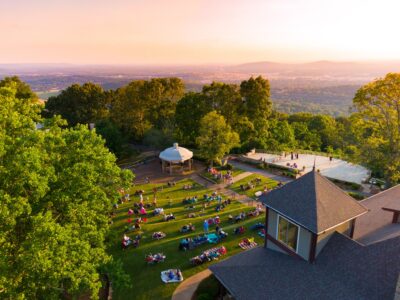 Located in the foothills of the Appalachian Mountains, natural beauty abounds in Huntsville, and one of the best places to take it all in is Monte Sano Park. The state park’s name means Mountain of Health and features 20 miles of hiking trails and 14 miles of biking trails set on 2,140 acres of Alabama forest. For one of the best views in town, head five minutes down the road to Burritt on the Mountain, a historic mansion and park overlooking the city. The 167-acre site atop Round Top Mountain has been a treasured Huntsville attraction for the past 60 years, where visitors can tour the stately Southern estate, walk the grounds of the historic park and barnyard, and hike on a system of nature trails. For a more structured nature tour, visit the 112-acre Huntsville Botanical Garden that features grassy meadows, woodland paths, aquatic habitats, and vibrant floral collections. 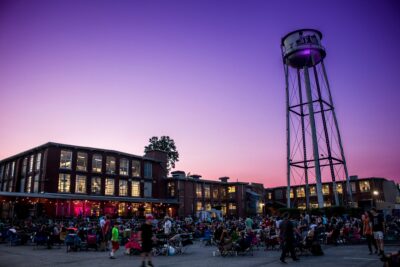 To explore Huntsville’s incredible arts and culture scene, spend an afternoon exploring the 152 working artist studios and seven galleries at Lowe Mill. Located in a 1901 textile mill, Lowe Mill is the largest privately owned arts facility in the southern United States. In addition to being a hub for the visual arts, the mixed-use facility also is home to several dining options including Piper & Leaf, a locally owned teahouse, artisan chocolate shop Pizelle’s Confections, and European-inspired eatery called Pofta Buna.

Close out a wonderful weekend in Huntsville at Campus No. 805, a former middle school that’s now a mixed-use development brimming with activity from two anchor breweries, several restaurants, an arcade, ax throwing, and more. Start your visit with a brew at Yellowhammer Brewing or Straight to Ale (If you ask nicely, a local might even show you a way to the brewery’s hidden speakeasy). Then have some fun at Ronnie Raygun’s or Pints and Pixels, both known for their drinks and arcade games. If you’re looking for a bit more competition, end the night at Civil Axe Throwing or X-Golf’s virtual golf course. 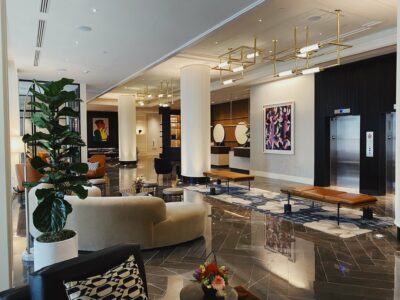 For a modern and comfortable stay in the heart of downtown, check in to the AC Hotel Huntsville. The Marriott property is located directly across from Big Spring Park, a 12.5-acre park in the center of downtown that’s home to the Von Braun Center multipurpose facility and event hall, as well as the Huntsville Museum of Art. Enjoy a signature cocktail nightcap at the AC Lounge.

For a boutique experience, book a stay at 106 Jefferson, a lifestyle hotel that harkens back to the era of the space race when Huntsville put itself on the map. Mid-century modern details are prevalent in the furniture and design of spaces throughout the hotel. Dining options include the chic Revivalist restaurant and bar serving breakfast, lunch, and dinner and Baker & Able, a rooftop bar that pays homages to a pair of monkeys that also happen to be Huntsville’s most famous astronauts to date.