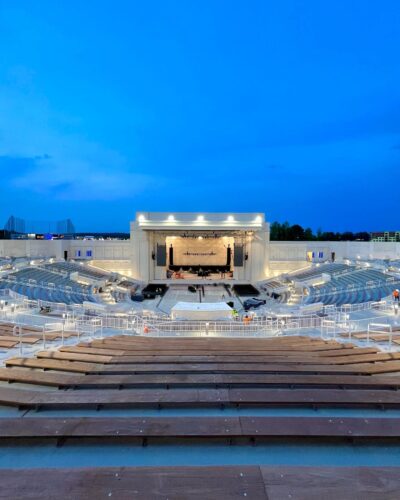 When Jason Isbell & The 400 Unit take the stage in Huntsville on May 13, it will be an extra special homecoming for the band. Their performance, along with those of other Alabama artists Brittany Howard, Drive-by Truckers, Emmylou Harris, John Paul White, St. Paul and the Broken Bones, and Mavis Staples is part of the First Waltz, a grand opening weekend-long event for the city’s new state-of-the-art music and event venue Orion Amphitheater. The venue, developed by Mumford and Sons’ band member and owner of entertainment and hospitality group Venue Group Ben Lovett, will usher the beginning of a new era for the city’s growing music scene.

For Lovett, building Orion was about much more than just adding another music venue to the city. Orion represents a push to create more “third spaces,” as Lovett refers to them, that can bring the community together in one location for an experience like they’ve never had before.

“We want to try and create a world where not only have you just seen Jason Isbell perform your favorite show you’ve ever seen, but you’re doing it with the most delicious bite of food in your hands and the tastiest cocktail anyone’s ever made you,” he says. “We don’t hold back on that ambition.”

For the past four years, Lovett’s Venue Group has been working closely with the city to create a venue that would serve the city in multiple ways for years to come. Not only would it bring in big-name music acts from all over the world, but it would also host festivals, cultural gatherings, fundraising events, graduations, and more.

“If we built this amphitheater on one end of the city and it’s just kind of doing X number of concerts a year, and it’s just existing in its own silo, it’s fine but what does that have to do with anything else here? It should be a rising tide that benefits everyone,” says Ryan Murphy, president of Venue Group’s Huntsville’s division. 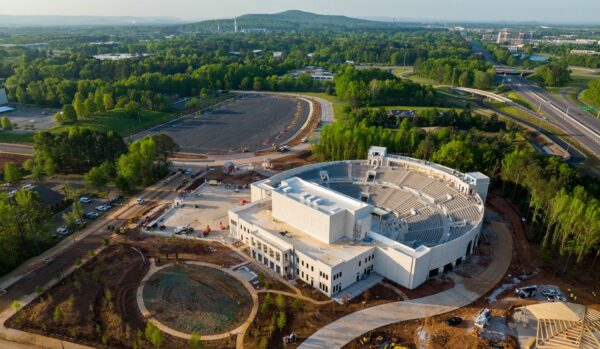 The result of those goals is Orion Amphitheater, an 8,000-person bowl-shaped amphitheater that rivals famous venues like Denver’s Red Rocks and Los Angeles’ Hollywood Bowl. The amphitheater features an impressive vertical lift rather than a long lawn. This keeps concert attendees close to the artist for a more intimate feel than you typically get in outdoor venues. To complement a better listening experience, the Orion will also focus on an elevated hospitality experience with improved dining and bar options.

After many years of careful planning, Murphy says the team was adamant that the venue’s introduction to the city be as intentional as possible. “We have a number of amazing international artists that are going to be announced over the next few weeks or couple months that are just going to wow people, and we could have easily picked one of those to be the opening show,” he says. “But I think because of how we approached this venue, I wanted it to be more of a microcosm to show what we’re actually trying to celebrate here. I wanted a celebration of North Alabama that not only celebrates the past—the history of the Muscle Shoals legacy—but I wanted to show what’s happening and what the future looks like.”

That’s why in addition to performances from national and international artists who cut their teeth in Alabama, the last day of First Waltz will feature Huntsville up-and-coming artists including The Aeolians of Oakwood University, Kelvin Wooten, Deqn Sue, Translee, Huntsville Community Drumline, Element XI, and The N.E.I.G.H.B.O.R.S.