Writing about food and beverages is very fulfilling, but this story really hit the sweet spot. I was invited to try the new fall flavors from Jeni’s Splendid Ice Creams at its “scoop shop” in Birmingham.

Jeni’s, if you’re unfamiliar, was founded in 2002 by Jeni Britton Bauer, whose bestselling cookbook, “Jeni’s Splendid Ice Creams at Home,” won a prestigious James Beard Award in 2012. Her products are rich and smooth, made from natural ingredients without emulsifiers and stabilizers. Jeni’s Birmingham shop is located in Pepper Place, with another slated to open in Mountain Brook.

Based in Columbus, Ohio, Jeni’s is a Certified B corporation, a for-profit business that prioritizes environmental and fair-trade concerns as part of the bottom line.

Jeni’s unveiled six new flavors in late September that evoke holiday treats and the weather’s transition from hot to cool. One, Banana Cream Pudding, even is non-dairy, joining a subset of milk-free iced treats by Jeni’s for the dairy intolerant.

The ice creams were served in one of Jeni’s “samplers,” 10 generous “half scoops” interspersed with shards of Jeni’s sweet and crisp waffle cones.

Yes, journalism can be a tough job. But somebody has to do it. Here’s the scoop on the newcomers that I sampled (thankfully with the help of my wife):

This truly is the taste of fall. Made with an heirloom pumpkin variety called buttercup, it’s the spice mixture that makes this my favorite in the new lineup. Star Anise, with a flavor reminiscent of licorice but milder, stars in a flavoring ensemble that also includes Vietnamese cinnamon, fennel, ginger, and white pepper. Flecks of cake contrast nicely with the extra-smooth texture from Jeni’s signature custard. 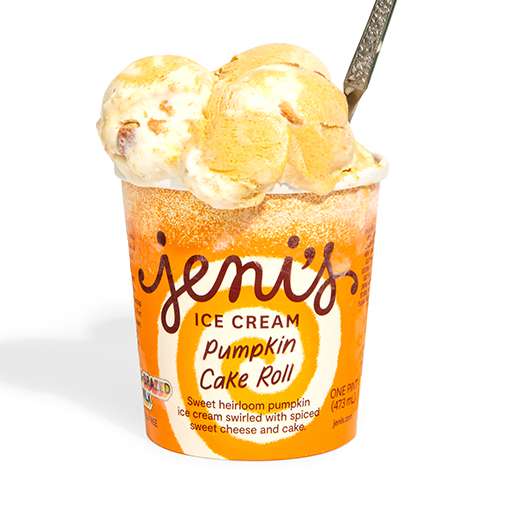 Great mint flavor. My wife likens it to Thin Mints Girl Scout cookies, while it reminds me of a York Peppermint Pattie. Made with fresh peppermint and perfectly-sized bittersweet chocolate chips, it’s naturally dyed using spirulina, an edible blue-green algae with antioxidant properties. 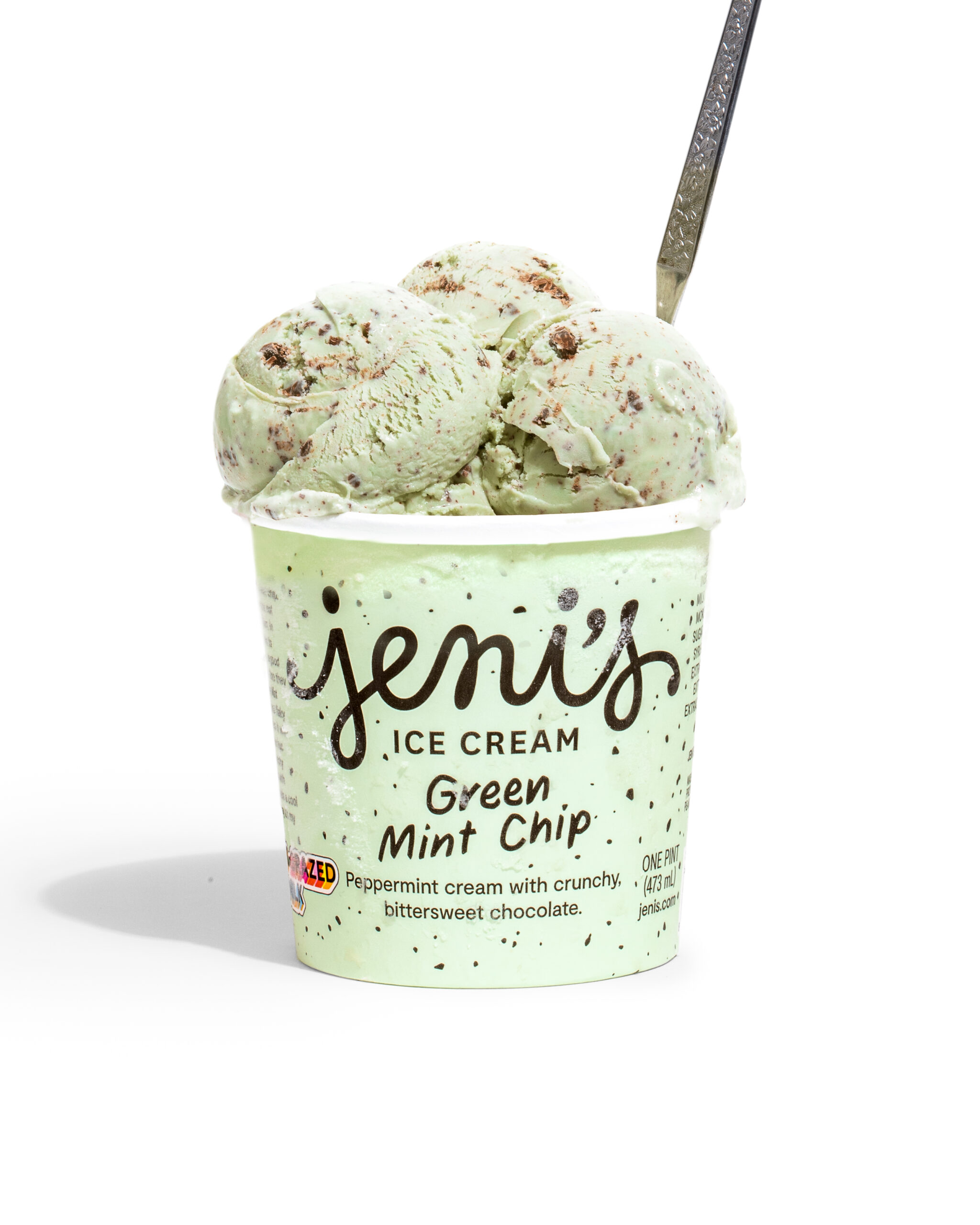 This is another textural contrast, this time between ice cream and bits of soft pie crust. The flavor carries an undertone of butterscotch candy—nutty buttery caramel flavors—with a rich creamy base. 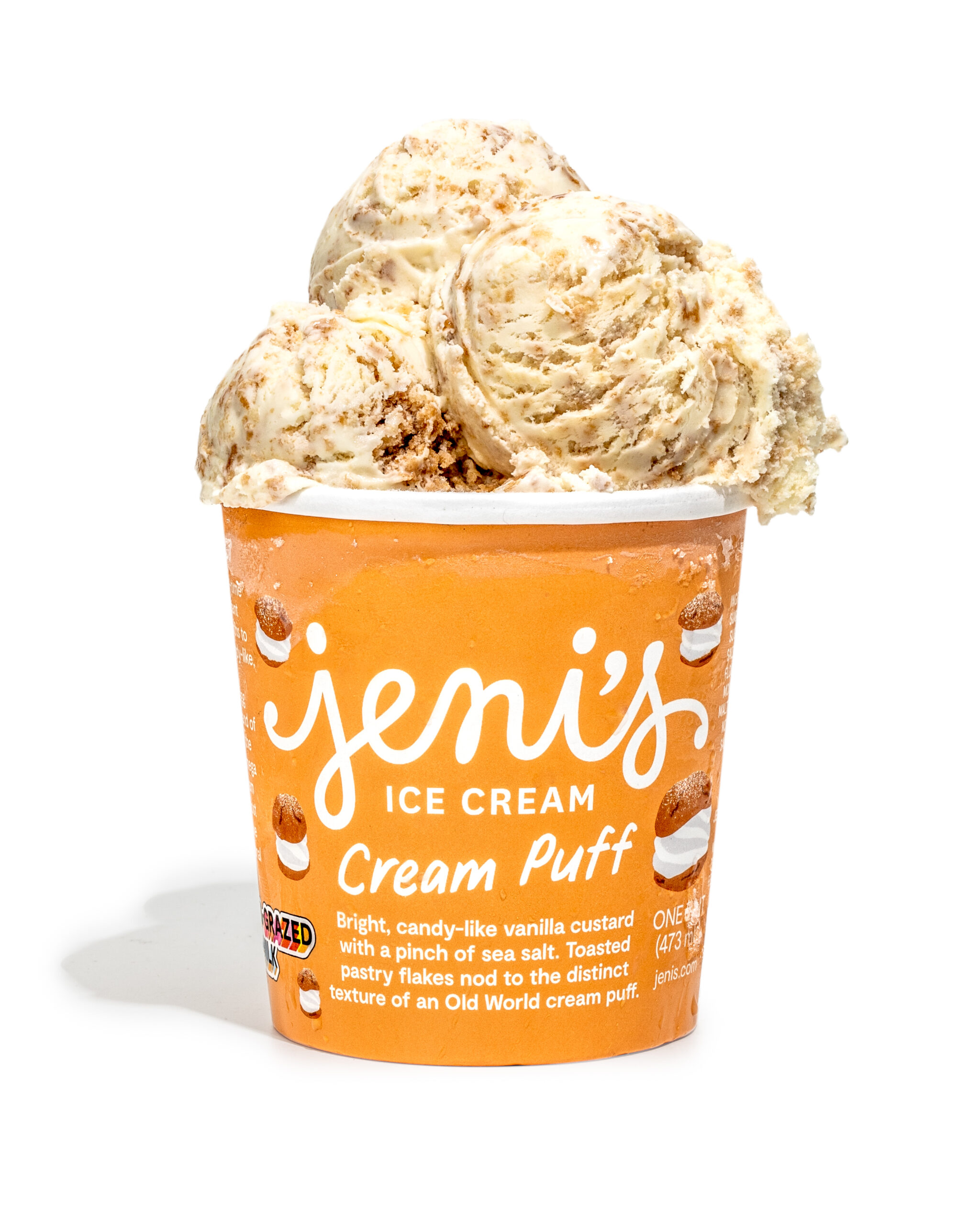 It’s even more decadent than if you dipped chocolate cookies in heavy cream. Vanilla-flavored ice cream is blended with pieces of gluten-free chocolate cookie. Think of an Oreo, except the two flavors in this are balanced. Chips of white chocolate add to the crunchy texture. 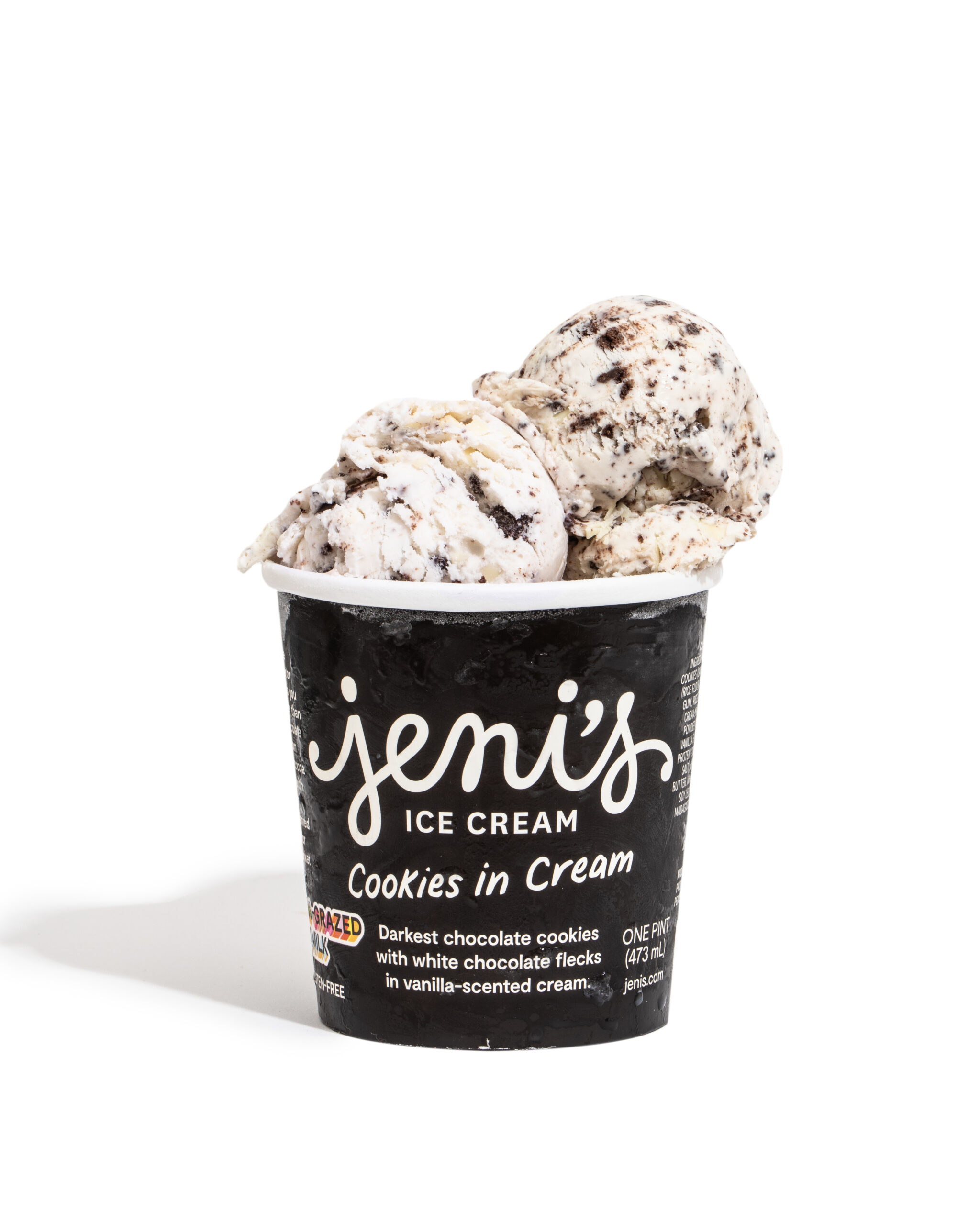 The flavors will intrigue both chocolate lovers and fans of crème brulee. Jeni’s rich vanilla custard base is balanced by fudge made with fair-trade cocoa. Bits of cake (the traditional Boston cream “pie” actually is a cake) perk up the texture. 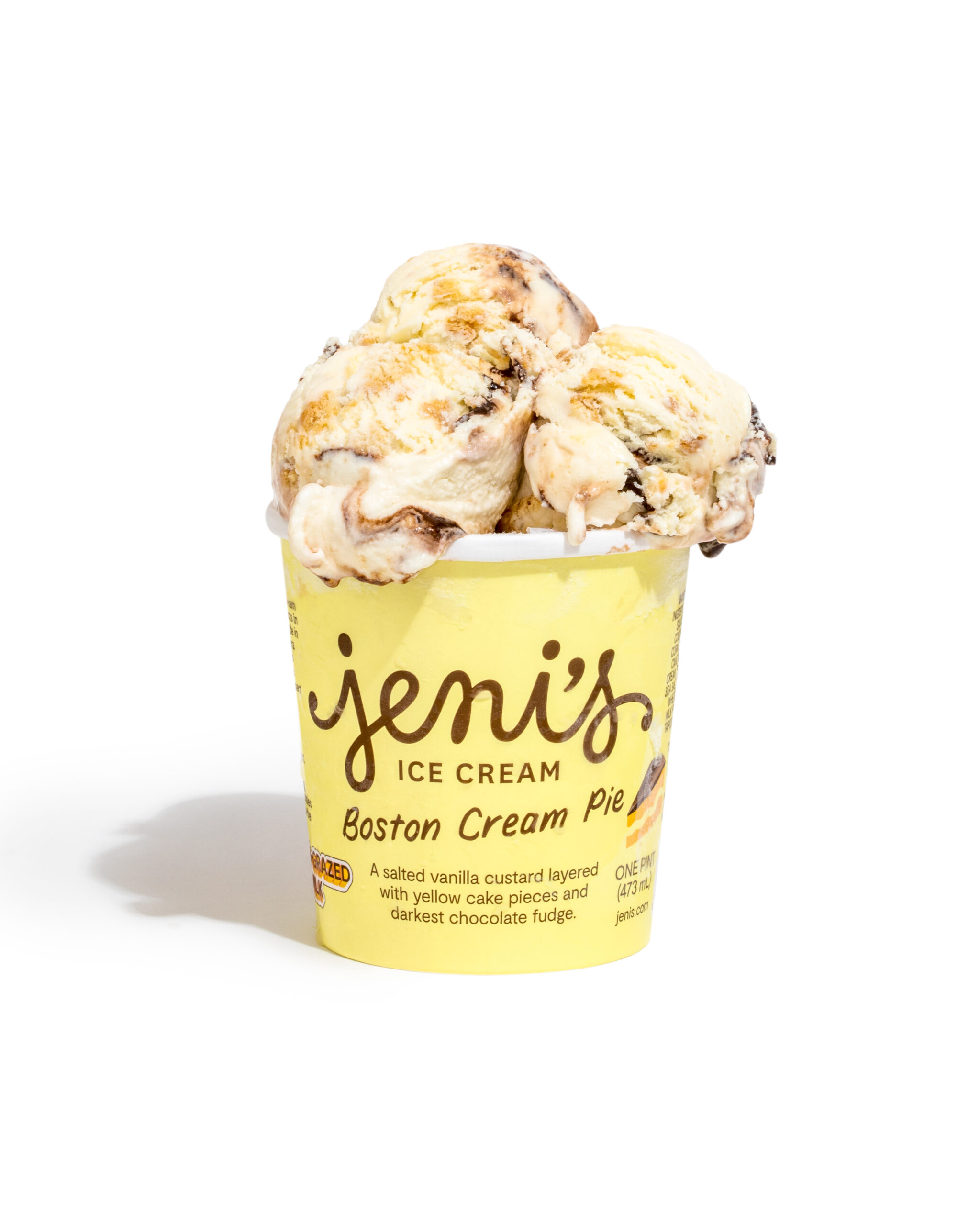 Although non-dairy and vegan, this has the mouthfeel of ice cream. The flavors scream banana, with a touch of coconut. Jeni’s bakes and breaks its own vanilla wafer cookies, which is an essential element of classic banana cream puddings and pies. Jeni’s version is gluten-free. 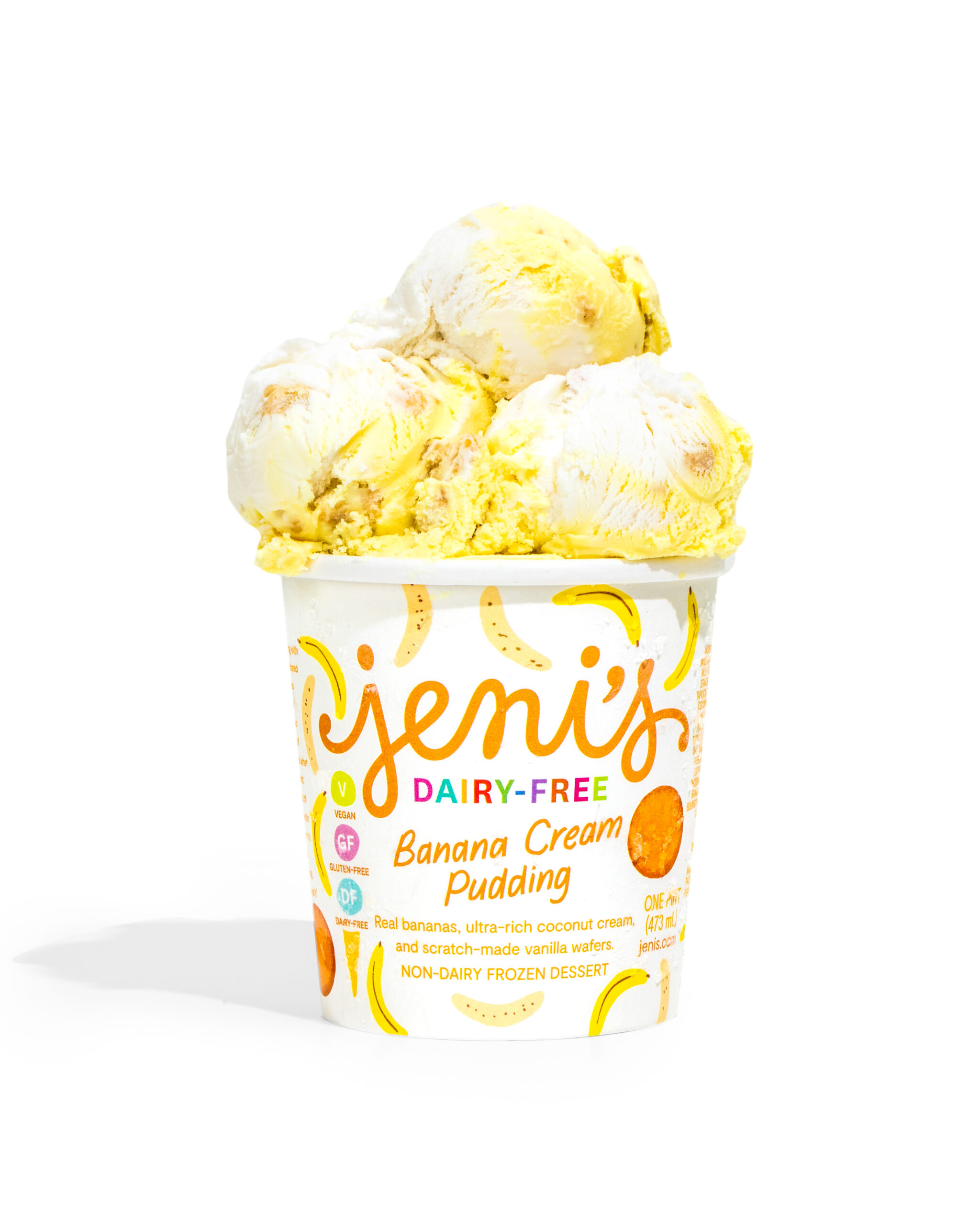