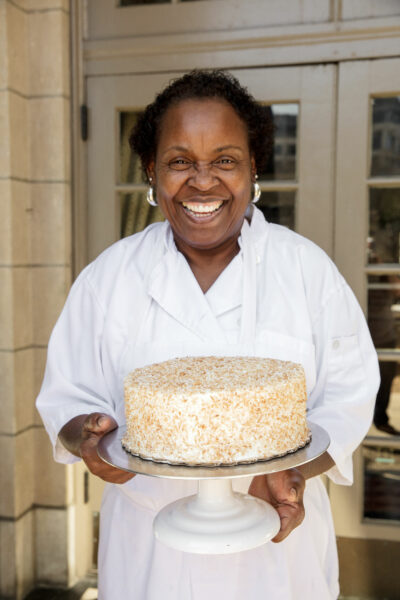 Highlands Bar and Grill and its sister restaurants Chez Fonfon, Bottega, and Bottega Cafe have earned fame and praise since Highlands opened on Birmingham’s Southside in 1982. Pastry chef Dolester Miles, who has worked for chef-owner Frank Stitt from the beginning, started out making salads and cold appetizers at Highlands. She switched to sweets full-time when Bottega opened in 1988 and the dessert- and bread-making operation moved in there. The team she leads now supplies all four restaurants.

In May 2018, Miles was named the nation’s Outstanding Pastry Chef by the prestigious James Beard Foundation, the same night Highlands won the Beard award for Outstanding Restaurant. The pandemic forced temporary shutdowns a year ago at FonFon and the Bottegas, and Highlands has been out of commission the entire time. But they’re all fully reopening this spring — just in time for Miles’ team to create pastry magic with the state’s best ripe strawberries, peaches, blueberries, and blackberries.

“Miss Dol,” she she’s known around the restaurants, discusses how she became one of the nation’s best pastry chefs and shares how you can up your dessert game, too.

What has your work life been like over the last year?

For about three or four months I didn’t work at all. And then I came back part time. I worked three days a week. But since we’re getting ready to open back up, I’m going to start back full time.

How did you start working for Chef Stitt?

My sister and I were looking for a job and she came across it first. She said, “There’s this new place on the Southside. This great chef is opening it up.” [Stitt] ended up hiring both of us. And the rest is history. It’s been a learning experience. He gets so excited about stuff you can’t help but get excited with him.

Before the pandemic turned everything upside down, how many different types of desserts did you make for the restaurants?

We do four down at Chez Fonfon. We were doing five at Highlands, five at Bottega’s dining room and four in the Café.

What is your favorite dessert to make for the restaurants? 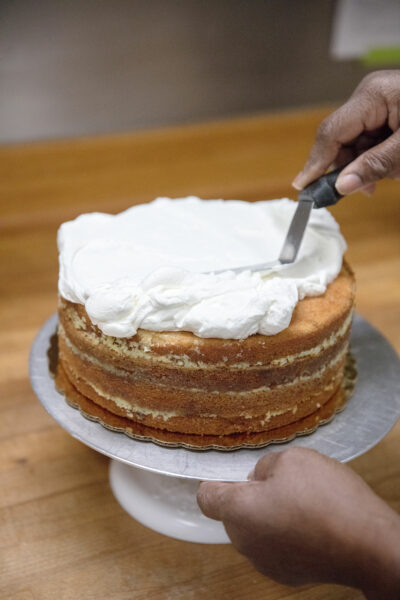 How did you come up with the idea for your signature Coconut Pecan Cake?

It started from German chocolate cake. I wanted to do something different so I just changed it up a bit. And it’s turned out to be a hit.

Walk us through the steps of making it.

We start with the cake and toasted pecans that we grind up — not too fine. And then I put shredded coconut with flour, butter, sugar, cream of coconut, and coconut milk. And then eggs, of course, and baking powder. That’s basically the cake.

For the filling we do condensed milk and put some cream of coconut in with eggs and butter. We cook that down and then we add more shredded coconut. It’s full of coconut. You have to be a coconut lover to eat it.

And then we put it together. We do two layers per cake but we cut each layer in half, with some of the filling between each layer. We build it up in the cake pan because it’s easier to store in our walk-in [refrigerator]. Then we unmold it and put Chantilly cream and toasted coconut on the outside of it. I like to let it set at least a day [in the fridge] before we send it out, so it has time to settle.

What advice would you give someone who wants to make better desserts?

I would start with cookbooks and different cooking magazines. Now, you can go online. Experiment with some things that interest you. Not everything will come out perfect but don’t let that discourage you. You learn from error. And if you keep trying it will.