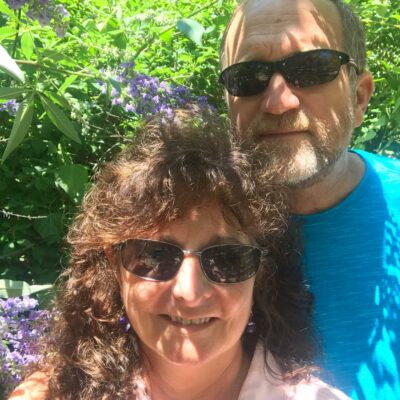 It’s easy to spot Grandview Farm’s stand at the Market at Pepper Place on Saturday mornings. Just look for the tie-dyed shirts, logs sprouting with shiitakes, and cartons of other harvested fungi for sale including pink, white, blue, and yellow oyster mushrooms.

Charles and Shiyrah Crowther started growing mushrooms while living in southwest Tennessee. But after moving to Shelby County 10 years ago, they found an especially receptive market among Birmingham-area chefs and home cooks.

Most of Grandview’s mushrooms grow from April through October, although the Crowthers also raise a cooler-weather shiitake variety. They sell logs inoculated with spores for DIY ’shrooms, as well as tinctures made from two mushroom varieties they grow, reishi and turkey tail, which are prized for medicinal use.

Sometimes spores from the farmed mushrooms waft through the woods and find a host on their own. “I’ve seen it on logs where I absolutely did not plant,” Charles says. “It’s kind of rare, but when it happens it’s absolutely incredible.”

The couple discuss how they cultivate mushrooms on their farm outside Montevallo.

Are mushrooms plants? What role do they play in nature?

Charles: They’re actually their own kingdom. They interact with our whole ecological system. Mushrooms like rotting things. You’ve got your wood eaters, like the shiitake and golden oyster mushrooms that what we grow. And then you’ve got your earth eaters, like chanterelles. The largest known organism actually is a mushroom, a honey mushroom in Oregon. It’s about 2,400 acres, mostly underground. (It weighs an estimated 7,500-35,000 tons and is at least 2,400 years old, according to the Guinness Book of World Records.)

How did you get into cultivating mushrooms?

Charles: In 2004 a friend of mine handed me a pamphlet from Fungi Delecti (an online fungi and frozen produce wholesaler). I saw a picture of a log with shiitakes growing on it. And I just went, “Man that is beautiful.” I fell in love with it. It started out as a hobby and just grew into a business. 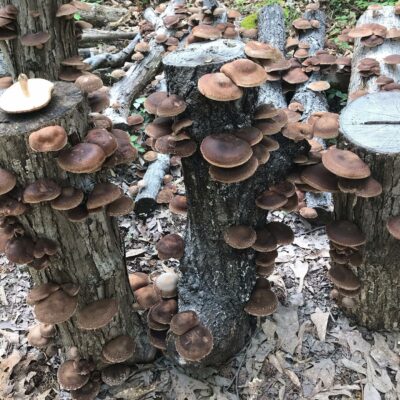 Shiyrah: There’s two ways to grow them, brick-grown and log-grown. We grow our mushrooms in logs.

Charles:  I inoculate freshly cut sweet gum or oak. You wait anywhere from eight months to a year and a half. After that the spawn has run and it’s ready to fruit. We soak the logs in water. About a week later the mushrooms are in and we harvest them. We let the logs rest a couple of months and then we’ll use them again. We rotate 5,000–6,000 logs.

Shiyrah: On a weekly basis we harvest anywhere from 100 to 150 pounds of mushrooms.

What are some common culinary mushrooms?

Charles: Maitake, which is medicinal and gourmet. There are dozens of different oyster mushrooms. In the chanterelle family there’s probably 20 different kinds that are edible. Morels are very much sought-after. There are hundreds of edible mushrooms.

What are your favorites and why?

Shiyrah: We love shiitakes because they have a smoky, meaty flavor. They are great on steak, on burgers, and in chicken marsala. You can use the stems to make a stock. They add good flavor. Charles loves to grill the pink oysters with butter and garlic. They’re also really good if you batter and fry them in an air fryer. Our golden oysters, you just lightly sauté them with some onion and other vegetables.

Do you give farm tours?

Shiyrah: We have a lot of home school groups come out. We try to get 10 or more people.

Charles: I go through the process of how we fruit the mushrooms. I talk about some of the trees I use and the different medicinal mushrooms.

Shiyrah: He shows them how to inoculate. And then we walk them down to the log yard and see the mushrooms coming in.

Where do you sell your mushrooms?

Charles: Pepper Place is our main market. And there’s also Till, which is an online farmers market. We sell to restaurants and local grocery stores including Galley and Garden, Bottega, OvenBird, Hot and Hot, FoodBar, Fig Tree, Satterfield’s, Roots and Revelry, The Essential, Ollie Irene, DG. There are a few others. The grocery stores are Local Source (in Birmingham) and Taproot in Hoover. We love interacting with the chefs. We’re both foodies.