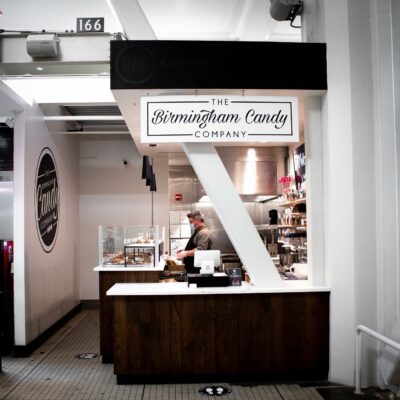 We won’t fudge the truth. The Birmingham Candy Company is one of the sweetest startups around.

Hoover native Cassie Bolden and her husband Wayne built their business by working numerous farmers markets and popping up at various locations around metro Birmingham before opening their permanent sweet shop downtown in 2019 at the Pizitz Food Hall.

“We’re just a good Southern candy company,” says Wayne, who learned the sugary art in Savannah, Georgia, where the couple met. “We make everything fresh in-house. We’ve got something for everybody. You can be a big kid or a little kid—doesn’t matter.”

Wayne makes the confections while Cassie, a graduate of the Savannah College of Art and Design, is in charge of the social media, branding, ambiance, and appearance. “She makes everything look good,” Wayne says.

In honor of National Fudge Day on June 16, Wayne walks us through the two-day process for making the dense sweet treat.

“There are two basic fudge mixtures, vanilla and chocolate,” he says. “And from there you can add your flavorings and nuts to make the different varieties.”

In the open galley at the Boldens’ 220-square-foot shop, Wayne warms the base ingredients in a large pot with an arm that whips the mixture until it’s smooth.

Flavorings include dark chocolate liqueur, nuts, and birthday-cake essences with sprinkles. “For our dark chocolate caramel sea salt fudge, we take our house-made caramel and put a layer of it right in the middle, and drizzle a little sea salt on the very top,” Wayne says. “It’s remarkable.”

The fudge cools overnight inside pans on a marble counter, and then is scored and put on display the next day. The parts that are exposed to air get firm, while the inside remains soft and creamy.

During visits with Cassie’s family in Hoover while the Boldens were still living in Savannah, the couple realized the Birmingham area lacked a local general candy store. They decided to move here and fill that void. 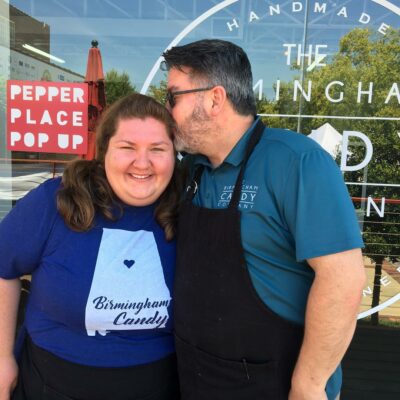 “That is what we are most-known for,” Wayne says. “It is soft, creamy and doesn’t stick to your teeth whatsoever. People always ask what’s in it and they’re kinda surprised when I tell them it’s just cream, sugar, corn syrup, and eggs. That’s it.”

The shop’s location inside the Pizitz Food Hall and across the street from the family-friendly McWane Science Center has helped create a customer base beyond Birmingham—from throughout Alabama and as far away as Michigan, home state to a couple that stocks up during twice-a-year visits to their son in Birmingham.

Planning is underway for a second Birmingham Candy Company location, probably in an over-the-mountain suburb south of the Magic City, Wayne says.

He laughs heartily when asked if being around all those sugary treats is an occupational hazard.

“To be honest with you, I don’t eat anything that we make,” the candy man says. “I’ve been around it for so long and I’ve made it for so long—going on 15 years now—the only time I ever eat it is when I’m taste-testing, just to make sure that it’s coming out properly.”