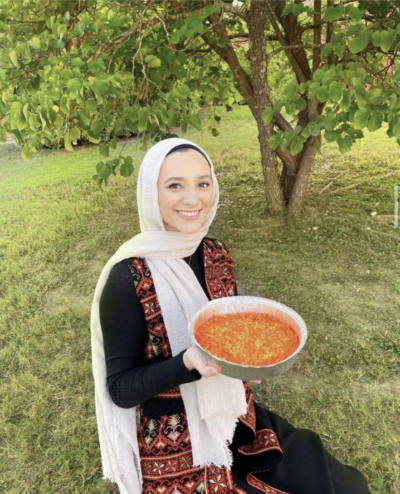 Twenty-one-year-old Ameera Hassan has always dreamt of owning a bakery. In 2019, she decided to start putting plans into action to reach her goal. She got hired as a baker at the French-inspired Continental Bakery in Mountain Brook. After a few months gaining experience there, she decided it was time to break out on her own. The Birmingham native wanted to continue making sweets but give them a twist to reflect her Palestinian roots.

“I had no experience in making Arabic desserts, but I knew that we had a demand for them,” Hassan says. “So, I quickly started learning each dessert. Before I knew it, it was the middle of 2019, the Instagram page was up, and orders were coming in.”

Within a matter of months, Hassan had mastered multiple recipes for Middle Eastern desserts and begun to market them to the community.  Over the past two years, she has amassed a steady following for her business Halwat Bham through Instagram. There, she posts beautiful photos of her Middle Eastern desserts and takes orders over direct messages. Halawat is an Arabic term used to describe sweetness, and Hassan’s business is definitely that. 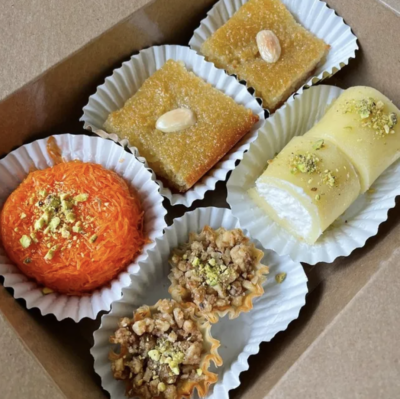 Hassan offers Knafeh, made of crunchy shredded phyllo dough layered with a creamy sweet cheese filling and soaked in rose water syrup, in two pan sizes or as singularly portioned cups that are as beautiful as they are appetizing.

“It’s my personal favorite,” she says. “It’s the traditional Palestinian dessert that everyone knows and loves.”

One of the most unique things about Hassan’s creations is that in addition to offering traditional Arabic sweets, she also puts her own spin on classic dishes with fusion desserts that are entirely her own.

“When it comes to baking, I love making all sorts of sweets,” she says. “Middle Eastern sweets are very fun to work with and get creative with. There are so many options to bring to life, but I have the most fun making the fusion desserts.”

Her Knafeh Cupcakes, for example, feature a vanilla and orange blossom cake base that’s topped with creamy ricotta frosting and finished with piles of the buttery shredded phyllo dough and pistachios used in Knafeh. Each cupcake is finished with a mini pipette of rose simple syrup. 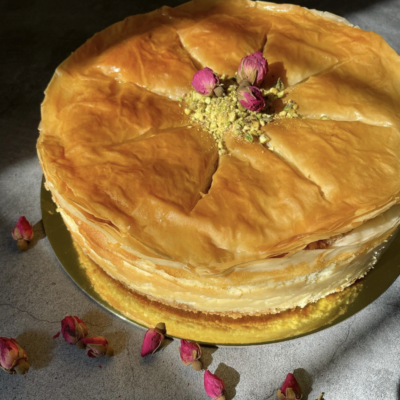 Another of Hassan’s fusion stunners is the Baklava Cheesecake, a showstopping centerpiece that combines the two desserts into one creamy, crunchy, sweet, nutty, delicious bite. One of the best ways to try everything Halwat has to offer is to order a sampler box. For $18, you get a Knafeh cup, two Baklava cups, two pieces of the syrup-soaked semolina cake Basbousa, and two pieces of Halawat Jibn—rolls of soft, sweet cheese dough filled with clotted cream.

Hassan often adds new desserts to her menu, so be sure to check her Instagram and Facebook pages for frequent updates and discounts on desserts. A website is in the works. Though Hassan says support for Halawat as an online business has been consistent and strong from the start, she’s excited to expand the business and come closer to her goal of owning her own bakery by eventually opening a brick-and-mortar location.