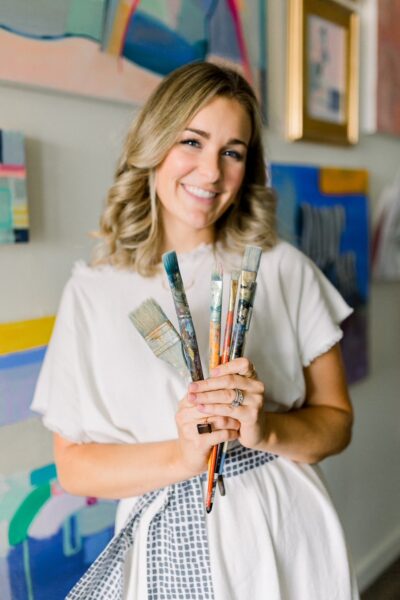 Rosilyn Holladay isn’t afraid of a little color. The Dothan-based artist is known for her colorful pop art paintings and tropical-themed abstract pieces, but her day job wasn’t always so creatively vibrant.

Over the years, Holladay’s relationship with art has waxed and waned. Though her passion for art began at a young age when she remembers being drawn to creative TV shows like “Out of the Box” and “Blue’s Clues,” by the time she entered high school her focus had shifted to sports. In college she says she briefly re-explored her creative side before deciding to study dental hygiene. Holladay was working full-time as a dental hygienist with art as a constant hobby when the opportunity arose for her to make a career shift in 2019.

“The decision to become a full-time artist started shortly after I became pregnant with my first child,” she says. “I had the opportunity to start a local art gallery and jumped into that adventure. My family was very supportive of this seemingly spontaneous career change, and they’ve helped me reach goals any way they can.”

After splitting time between promoting other artists at the gallery and working on her own art, she decided her true dream was to grow RHolladay Art. Using a mixture of acrylics, watercolor, pastels, ink, resin, clay, and encaustic, Holladay creates one-of-a-kind pieces that are meant to bring a bit of color, playfulness, and joy to art lovers’ collections. Her subjects range from hard seltzer cans and Yeti coolers to abstract designs, tropical fish, seashells, fruit, and other bright summer subjects.

Holladay says she finds inspiration for her work through all aspects of her life, with travel being a huge area of influence. “My husband and I love traveling to tropical destinations whenever we get a week off from parenting,” she says. “Many of my bright, colorful collections are influenced by the Caribbean.” 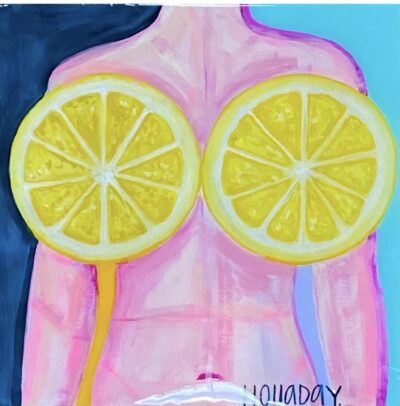 But it’s not just the exotic that inspires Holladay. “I am also influenced by my hometown of Dothan,” she shares. “My friendships, favorite restaurants, neighborhood parks—they all have a way of showing up in my artwork. I love making art that people can connect with.”

Recently, Holladay began painting shoes after a local teenager requested that she paint her Air Force Ones. “I had so much fun researching supplies and taking on that new challenge,” she says. “I’m so excited knowing that my art will now be walking down the halls of one of our area high schools.”

One of Holladay’s most popular series, the Ooh-La-La collection, features colorful female figures with lemon slices and other fruit in place of their breasts. The idea came from a brainstorming session with her husband.

“I was putting the final touches on a new series of lemon paintings, and my husband challenged me to add a special piece to the collection that was funky and different,” she remembers. “I had previously released several figure study collections, and that was what first came to mind. Like all things in art, there was a learning curve with the composition of the idea, but it eventually grew into one of my most successful series.”

The series, Holladay says, is especially meaningful because she’s had the opportunity to donate a portion of the proceeds from several painting sales to breast cancer research.

“So many collectors have sent me messages sharing how this series speaks toward body positivity and female empowerment for them,” she says. 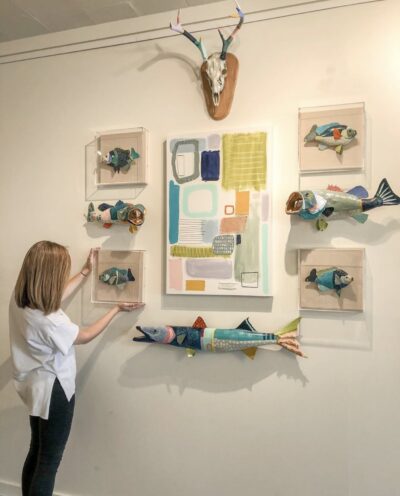 In addition to her creative collections—which have included everything from mixed media champagne bottle casts and watercolor beach scenes to hand-painted taxidermy bait fish and hand-stitched seagrass fish—Holladay also specializes in live wedding paintings. Holladay says live paintings have always been on her radar, but it wasn’t until she retired from the gallery business and her two sons got a little older that she found time for the pursuit.

“The recognition that I’m capturing a memory they will cherish forever is one of the most rewarding parts of my job,” she says. “I feel so blessed to have the opportunity to wake up every morning and follow my dreams.”

While it’s still early in her career, Holladay has several goals set for her future—one of which is to sell out a series in less than 10 minutes.

“I realize that this sounds comical, but I love the feeling of preparing to purchase an artist’s piece knowing that the entire series will sell out within minutes of the launch. It speaks to the passion and excitement that art can generate for such a large group of people. I’m constantly working towards creating collections that speak to people on a widespread, yet intimate level.”

Find Holladay’s art at rholladayart.com and by following her on Instagram and TikTok at @rholladay.art