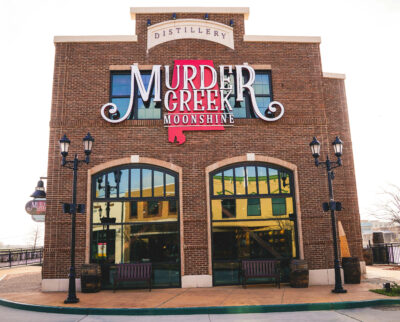 Murder Creek Distillery in Riverview has been on a winding journey since its founding four years ago.

When the pandemic hit in 2020, it veered off from making legal commercial moonshine to producing pure-alcohol distillate for hand sanitizer. Then came a surge in demand among home-bound consumers for jars of Murder Creek’s clear and flavored liquor.

The company also is celebrating the first anniversary of its second location—a small distillery, tasting room, and bar at Downtown OWA in the resort in Foley run by the Poarch Creek Indians. An instant success, the facility now accounts for some 40 percent of the distillery’s sales.

“We’re very grateful, being invited to be part of the OWA downtown area,” says Stephen Matthews, a co-founder who runs operations at both sites. “Little companies like us don’t get opportunities like that very often.”

Stephen and his partners hope the OWA location is the first step in an expansion of Murder Creek’s retail sales in Alabama. Jars of the moonshine are fairly easy to find in the Florida panhandle, but in its home state, most sales now originate at the distilleries. 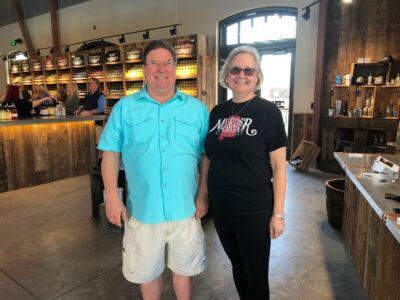 Production at Murder Creek has been a family affair. Stephen runs production and the business at both facilities. His father, Dan, is a co-founder and coded the software for Murder Creek’s automated distilling system. Stephen’s mother, Maryann Matthews, develops the flavorings that are blended with the distillate.

“Most of them are my mom’s creations,” Stephen says. “When we think of things, or if people ask us for a flavor, we start to work on it. Next one probably is going to be lemon because people keep asking for that.”

Traditionally, the main ingredient in moonshine is corn, which also flavors the spirit. But the folks at Murder Creek create a neutral spirit by making their product mostly with sugar, with enough rice bran to support the yeast that’s added to turn sugar into ethyl alcohol during the initial step of moonshine-making, called mashing.

The mash is distilled twice, creating a colorless spirit that’s roughly 190 proof, or 95 percent alcohol by volume (commonly referred to as ABV). You can buy the uncut full-strength moonshine only at the original distillery, but for most sales Murder Creek dilutes the clear product to a more standard strength for liquor, 80 proof (40 percent ABV). 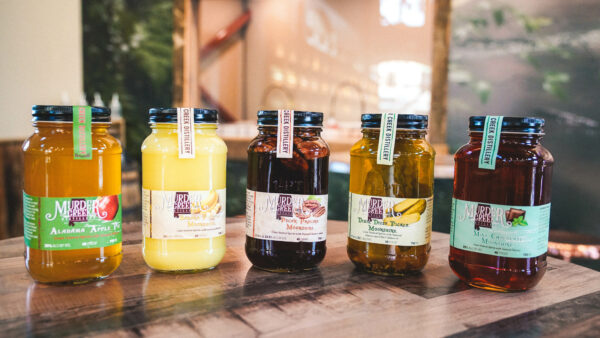 The flavorings for blending reduce the strength to 40-50 proof (20-25 percent ABV). Among its 15 versions, customers favorites include banana pudding, a pepper-onion-apple cider vinegar blend called Hot Shot, and dill pickle.

“Somebody asked me one time how I got the pickle to go through the still,” Stephen says. “That’s not how I do it. I make one kind of alcohol and then add the flavorings after the fact.”

The flavored products can be consumed straight, or blended to make cocktails, like the mixed drinks Murder Creek swerves at its bar in OWA.

State law prohibits alcohol giveaways, so the OWA tasting room charges a $1 flat fee for adults to sample any or all of the moonshines. The OWA location also sells the 750 ml jars of Murder Creek moonshine products.

Distilling at OWA can be viewed through a glass partition. Stephen says he plans to add signage explaining the process.

Although OWA doesn’t give formal tours, Stephen says he’s glad to talk distilling and show how it works at the original facility in Riverview, near Brewton. No appointment is necessary.

“Just walk up, start asking questions, and I’ll show you anything,” he says. “That’s all you need to do with me.”