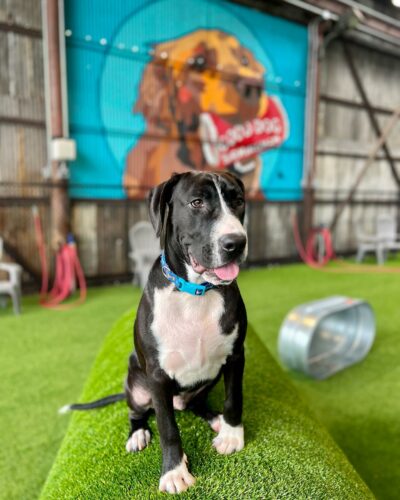 We’ve all been there—your pup has the zoomies, you’re looking forward to a night or afternoon out, and you have nowhere to take them. Good Dog, a new dog park and bar with locations in Auburn and Birmingham, has the answer to all three problems. The new concept combines everything dog owners love about bringing their pups to a brewery—the cold brews, ample outdoor seating, and open space—and makes it even better by gearing the space specifically toward dogs. This way, instead of being tied up to a picnic table, your dog can frolic off leash and play with other pooches in an environment that’s safe, welcoming, and fun for everyone.

Good Dog is the brainchild of owners Clint Carmichael, Jeff Hardwick, and Bobby Morgan. Carmichael said the idea for Good Dog sprung from a need for more quality dog parks in Birmingham.

Hardwick, who owns The Pawms Pet Resort in Birmingham, noticed the same problem. He wanted to add a dog park service to his premium doggy daycare and boarding facility, so he partnered with Carmichael and Good Dog was born. After establishing a plan for a Birmingham location on the Rotary Trail, they then set their sights on Auburn.

“Auburn is a wonderful dog-friendly community,” Carmichael says. “It has one of the best vet schools in the country, but there are not many nice dog parks. Many of The Pawms’ employees graduated from Auburn and have wanted a presence there for a long time.” 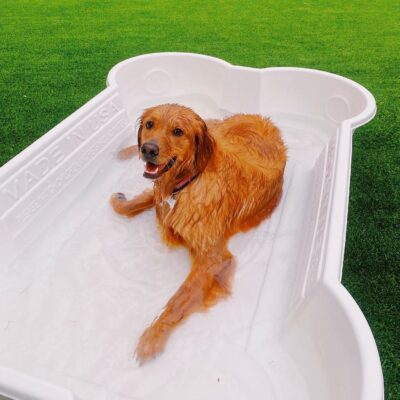 The Pawms opened an Auburn location in 2021. Good Dog Auburn followed in April 2022, then Good Dog Birmingham opened in May. The Auburn location, as well as a soon-to-open location in Tuscaloosa, is located on the same property as The Pawms, so four-legged guests have plenty of room to roam and play.

In addition to being 100% turfed and fenced in, Good Dog caters to dogs by making sure there’s plenty of shade, tunnels, and even pools for them to frolic in and around. To ensure that pups of all shapes, sizes, and breeds are safe, all dogs are required to show proof of vaccination before entering the park. They also must be four months or older and spayed or neutered to enter.

To enter, dogs must have a year or monthlong membership or have a day pass. Day passes are $12 in Birmingham and $10 in Auburn, with passes for additional dogs costing $6 and $5. Owners can let their pups mix and mingle, while they sip on a selection of beer, wine, seltzers, and nonalcoholic beverages. It’s the perfect way to spend an evening with your dogs, other people’s dogs, and other people who love dogs. As a bonus, one percent of all sales are donated to animal-related charities in Birmingham and Auburn, so you can feel extra good about your visit. 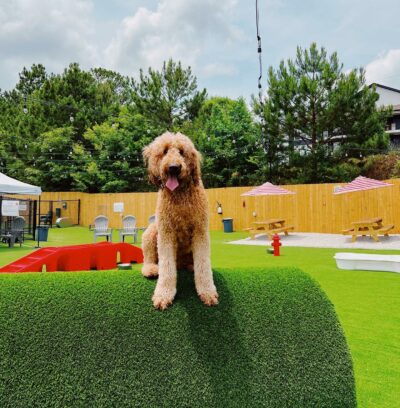 After being open for only a few months, Carmichael says the reception for Good Dog has been “fantastic.” There are more than 250 Good Dog members between Birmingham and Auburn, and more to come when the Tuscaloosa location opens in December. He says his own dog, a 7-year-old Golden Doodle named Callie, is a huge fan of the park and especially loves climbing on top of the tunnels and seeing other regulars. But Good Dog is not just for dogs and their owners; it’s for everyone, Carmichael says.

“There is no happier place than Good Dog,” he says. “I have had really bad days, and I drop by daycare, hang with a bunch of Goldens for 10 minutes, and I walk out a new person. It is therapy.”

Between breed meetups almost every weekend and other events hosted by animal charities and organizations in town, there’s always something happening at Good Dog. Carmichael says the community built in just short amount of time has already blown him away.

“Everyone loves dogs, and Good Dog brings a safe place for dog lovers to bring their dogs to play, a place to interact with other dog lovers, and a way to give back to the community at the same time,” Carmichael says.