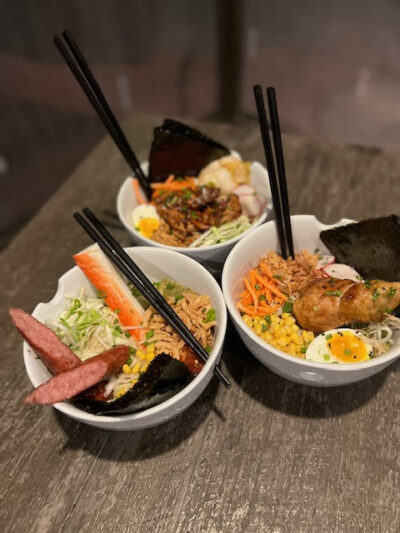 Like the start of many new businesses and pursuits, Pop Ramen’s origins began during the pandemic. And after two years of speed bumps and hard work, the new food truck is finally ready to hit the streets of Birmingham with its creative take on ramen. Pop Ramen is the brainchild of chefs Addison Porter and Cory Bolton, longtime friends and industry veterans who met working at Birmingham seafood restaurant Ocean several years ago. During COVID, they made the move from Tuscaloosa back to Birmingham to take jobs at the former Fancy’s on the Fifth in Avondale, and that’s when the idea for Pop Ramen sprung about.

“In the middle of COVID, we were thinking about what we were cooking at home all the time,” Bolton remembers. “What’s something that spoke to us, and how can we translate that into a business that might have a better footing during times like COVID? That kind of came as a noodle cart, and then it kind of evolved from there.”

Bolton says the idea to make creative ramen bowls comes from years of personal experience. As a fine dining chef, long kitchen hours meant getting home at midnight or later every night. He’d come home exhausted and craving a hearty meal. Ramen was often the answer.

“There’s nothing open, there’s nothing to eat, and you’ve been cooking all day,” he says. “But you got two packs of ramen, a pork chop in the fridge from yesterday, a little bottle of chili peppers one of your coworkers gave you, then you make this amalgamation of flavor and fun. It’s maybe not authentic and maybe not perfect, but it’s what you have, and you can find a lot of comfort in that bowl of noodles in the moment.” 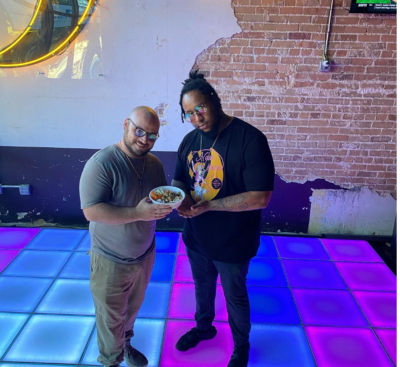 “It’s reminiscent of those little sweet and spicy, salty bites of chickens that you get on a toothpick when you’re walking the mall,” Porter says. “So, it’s kind of an American evolution of ramen. As Americans, we take that source material and adapt it to our palates and what’s available to us regionally and locally. Our way of life shapes how we eat things and enjoy things. There’s also a lot of nostalgia to it.” 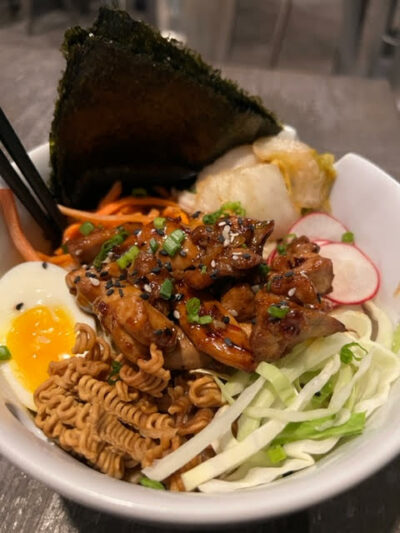 The pair shows off their cooking chops with chef-inspired touches like the wok-friend chicken leg featured in the Chicken & the Egg bowl. It’s cooked in multiple parts for maximum flavor. First, it’s marinated in their own blend of spices and seasonings and grilled, so it gets a nice char on the skin. Then, it’s flash-fried for extra crisp, and finally it’s finished in a wok with house made sauce. “It’s a lot of layers, and there’s some ‘chefy’, technical work there,” Porter says.

For the project, Porter and Bolton have partnered with Paget Pizitz and Harriet Despinakis, Birmingham restaurateurs known for their popular grilled cheese concept Melt and former burger spot Fancy’s on the Fifth, where they first met the pair.

“COVID is a time where you either swim or sink, and they swam. I think that really inspired us to have faith in them,” Pizitiz says. “When Harriet and I see their passion, it makes us passionate for them as well. Also, they’re damn good cooks. They’ve talked about this for so long. We wanted to see their dreams come true and make it a win-win for everybody.”

The truck is set to start popping up at Melt, Neon Moon, in neighborhoods, and beyond, soon. Keep your eye out on the Pop Ramen Instagram for updates on where you can find the truck next.