Opera Birmingham introduces the musical art to the city 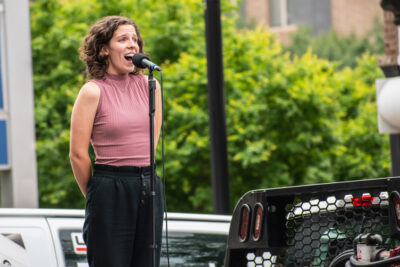 If a high note breaks your beer glass, it’s not the alcohol singing—it’s Opera Shots. Far from the stodgy image of the large woman in a Viking helmet, this progressive opera company takes opera to the street, the bar, and the brewery. Opera Birmingham showcases its singers before unsuspecting audiences who get a sip of culture along with their cocktail.

“People are sometimes surprised when we show up,” says Eleanor Walter, Director of Marketing and Community Engagement for Opera Birmingham.

The concept of Opera Shots began when director Keith Wolfe-Hughes moved to Birmingham in 2015 to lead Opera Birmingham. He had heard of New York’s Opera on Tap and began his own program in Birmingham. The concept was to take opera to new and unexpected places to introduce it to new audiences.

The Collins Bar, Avondale, Cahaba and Good People breweries have all hosted shows. So has a charter school in Woodlawn and on the street of Second Avenue North. Railroad Park hosted a children’s program that featured music from “Aladdin,” “Beauty and the Beast,” “Willy Wonka,” and “Mary Poppins.” The classic song “A Spoon Full of Sugar” sounded out to the delight of children and gratitude of parents. 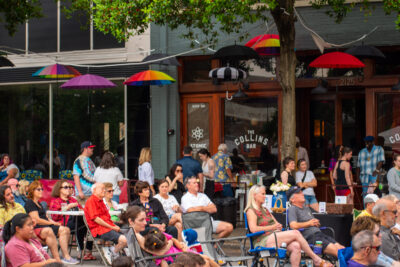 “If you expose children to opera at an early age, they grow up enjoying opera,” Walter says. “A family brought their four kids. The mom said she would have never gotten them all in a theater. But here, they could break out the picnic blanket and snacks in a welcoming atmosphere.”

Even through the Covid shutdown, this unstoppable opera company rolled out a flatbed truck and created a stage in their parking lot. The makeshift stage has traveled to several pop up places where opera had never been heard and remains on stand-by for future venues.

The singers come from a variety of sources. Some are visiting artists in town for a big show. Others belong to the company chorus. Some are opera students at Samford University or the University of Alabama. They each take a song or two and sing in turn from whatever serves as a stage, or just from a mic stand in the front of the bar. Occasionally, a duet may pair a couple of singers.

The songs range from high opera to musical theater to art songs. It’s an opportunity for singers to share a favorite such as the “Marriage of Figaro” by Mozart or “Let It Go” from the popular animated movie “Frozen.” Songs have been performed from “Le Boheme,” “Carousel,” Cole Porter, “Into the Woods,” and the film “Moana.”

Full operas stepped outdoors when Opera Birmingham performed the “Pirates of Penzance” in Avondale Park to sold-out audiences. “Three Little Pigs” followed for kids in the park’s amphitheater. Two popular events are the Sounds of the Season, holiday music, and an annual Vocal Competition that attracts rising stars from all over the country. 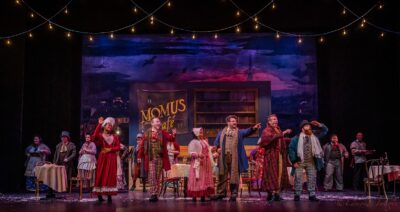 While Opera Birmingham indulges in the rich heritage of opera with traditional shows such as “La Traviata,” “Tosca” and “The Barber of Seville,” it also steps out of its silk shoes into contemporary topics. Performances have addressed issues such as prisoners of war, unknown soldiers and Civil Rights. January’s “dwb (driving while black)” took a backseat to Covid but will return later on the real stage. This production stands as part of the Birmingham Speaks initiative to generate conversations out of the collision of life and art.

The outreach has successfully brought in new fans to productions. “We are seeing the next generation of opera patrons in the audience,” says Walter. “We will continue branching out.”

Opera Shots run monthly in spring and fall. If you are enjoying a drink and hear a voice strong enough to make the walls expand, it might just be opera. Give it a listen, you might find out the champagne of music could become your drink of choice.