The national recreational-vehicle dealer Camping World, Baumhower’s Victory Grill, and the University of Alabama’s basketball program are teaming up for a full-court press against food insecurity.

They plan to feed 5,000 people in Tuscaloosa and Birmingham in the last half of 2021 as part of the Plating Change Initiative, which was launched a year ago by Camping World founder Marcus Lemonis.

In late October, for example, Baumhower’s fed 150 people connected to the Tuscaloosa-based Boys and Girls Clubs of West Alabama, as well as the Central High School football team. The menu included Baumhower’s Black and White chicken platters with green beans and wild rice.

“Servant leadership and being ‘born to serve’ has always been something that is deeply woven into the fabric of who we are as a company,” said Spencer Baumhower, the Alabama restaurant chain’s chief operations officer, in a news release. “(We’re) fired up to get to work and create a legendary impact here.”

The University of Alabama and the other universities that participated in the 2020 Maui Invitational, an early-season basketball tournament that Camping World sponsors, were invited by the Plating Change Initiative to partner with a local restaurant to feed area residents in need.

With funding provided by Camping World and an anonymous Alabama musician, the university selected Baumhower’s as its initiative partner. Baumhower’s solicited recommendations from community leaders for potential recipients, and then interviewed the organizations to learn about their missions before choosing the groups it would serve.

In addition to the Tuscaloosa-based Boys and Girls Club, participants include The Foundry Ministries in Vestavia Hills, Mind Changers youth mentoring group in Tuscaloosa, and College Hill Missionary Baptist Church in Tuscaloosa. 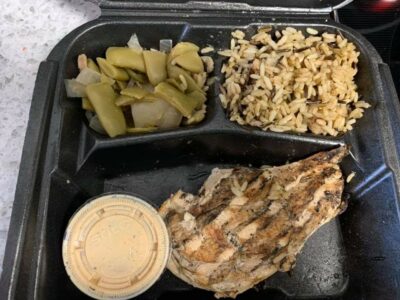 “We at Baumhower’s Victory Grille feel honored and humbled to be part of the Plating Change initiative, and to work with such outstanding organizations focused on goodwill initiatives in our communities,” says Bob Baumhower, the restaurant chain’s founder and CEO.

Baumhower’s Victory Grill has nine locations, including Huntsville, Tuscaloosa, Hoover, Vestavia Hills, Montgomery, Daphne, Auburn, and Mobile. The original opened in 1981 in Tuscaloosa, where Bob Baumhower played football for the Alabama Crimson Tide before a career in the National Football League.

The Plating Change Initiative was launched in November 2020 by Lemonis’ Lemon-Aid Foundation. Camping World is matching donations to the overall effort, up to a total of $1 million. Lemonis is a businessman, entrepreneur, philanthropist and television personality.

The idea behind the project is to not only feed people who might not otherwise get a solid meal, it’s also to help out local restaurants, which in general are still mired in the pandemic malaise.

“The pandemic and its lasting effects have been trying on everyone,” Baumhower says. “Because of Plating Change, Camping World, Alabama’s Basketball Team, and an anonymous donor, we were able to make an impact in the state of Alabama to help fight food insecurity and bring a peace of mind to the recipients.”