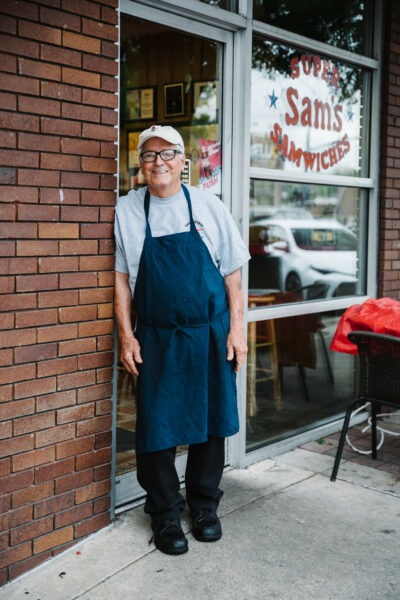 Sammy Graphos, who died Oct. 5 at age 79, was an icon in Homewood where he held court for 52 years at his small grill. He was an important figure in a line of first- and second-generation Greek immigrant restaurateurs who cornered the market on hot dog stands throughout the 20th century, collectively developing a signature Birmingham style they simply called “Special Dog.”

By the time Pete sold the chain in 1986, Sammy had rebranded his Homewood store as Sam’s Super Samwiches (“It is the only samwich in the world,” he says). From a tiny space – only 10 feet wide – Sam’s would produce some 250 hot dogs and 200 hamburgers on a busy day. 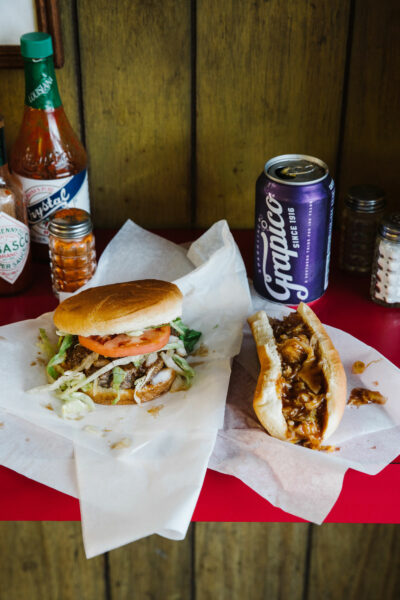 Survivors include Graphos’ wife of 54 years, Sue, children Ted (Lori) and Suzanne Schoel (David), two grandchildren, and his brother Pete. He was predeceased by Jimmy and their sister, Pauline Pihakis.

I interviewed Sam in 2017 as part of an oral history project for the Mississippi-based Southern Foodways Alliance. In these excerpts, condensed for length and clarity, the funny, charming storyteller talks about hot dogs and family traditions.

I cook (the wieners) on the grill. We have a steamer, because you have to have a hot steamy bun to have a good samwich. I love a samwich with a softer bread. Then I put the mustard, onion and kraut. Meat and the chili go on top, and then the sauce.

People love our sauce. My dad gave us the recipe. He and my uncle John Collins made it up. (I)t cooks all night long. It’s tomato-based (with) vinegar, allspice, garlic, salt, pepper, paprika, chili powder. It’s spicy, not real hot, just spicy.

I know what most of them eat because they always eat the same thing. Like if I’m with my wife somewhere somebody will, “Hey, Sam, how you doing?” I say, “Fine.” And after we get through talking, she’ll say, “Who was that?” I’ll say, “I don’t know. It’s two hot dogs, no onions. That’s all I know.”

I was with Pepsi for years, and Coca-Cola came in and asked me what it would take to get Coca-Cola, and I told them, “I don’t know.” And they said, “Would you like to go to the Masters?” 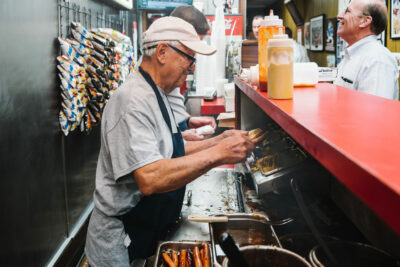 I’ll have fifty or sixty kids come and eat. I always tell them, especially when they have tests, “It’s brain food.” Whoever eats my sandwiches for breakfast, it just makes their brain work better during the day.

Now, the boys and the girls, you know how kids are. Beautiful girls, nice-looking boys. Boys sit on one side. Girls sit on the other side. They don’t talk to each other. I told the guys one day, I said, “You boys need to start talking to those girls, because when you get old, you’re going to say, ‘Boy, why didn’t I talk to that girl?’” But that’s how it is when you’re young.

My dad used to get a lamb about a month before Easter and would have it in the backyard and he’d feed it grass. (T)hen the day before Easter, he’d say, “Come on, boys.” We’d get that lamb and take it down in the basement. … We would eat (that) lamb for Easter.

We grew up on Norwood Circle. There was 20 Greek families on that circle. (At Easter), everybody out there would cook lamb. 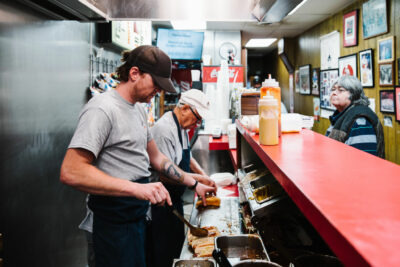 Decades later, Jimmy revives the tradition of spit-cooking a whole lamb for family gatherings, including a couple of notorious parties at a nephew’s home.

We used a hand crank. We’d sit there and we’d turn that thing. You get a Bloody Mary, and when you got through with the Bloody Mary, somebody else would come and you’d go get another Bloody Mary.

(One year) we had a lamb, we had the head and so I put (it) on this tray with lettuce and stuff around it, put it in the pool. (The hostess) came out and saw that and freaked out. Then the next year, I put the head in the toilet and put the lid down. And about an hour later, you heard her screaming and hollering.

From then on, we haven’t been able to go to her house and cook lamb.

Identical twins, Sam and Jimmy were pranksters, including at Sam’s wedding reception.

I got tired, so I called my brother Jimmy over there. We both had tuxedos on. I gave him my little corsage and he walked around with my wife. Nobody knew it wasn’t me.

When Jimmy died in 2016, Sam honored his twin’s special request.

Usually when you get buried, you go to the church, then you go to the cemetery, and then everybody comes back to the banquet hall. I don’t know why, but they always serve fish. Jimmy said when he died, he wanted hot dogs. I asked the priest, I said, “Father, is it okay if I bring hot dogs?” He said, “Yeah.” So, they had fish, but I took a bunch of hot dogs. (T)hat’s what he wanted, so that’s what he got.

Sammy was buried Oct. 7 in a family plot at Elmwood Cemetery. Naturally, in the interview he had a joke about that eventuality.

I was raised in Norwood, I’ve lived in Homewood, and I’m going to be buried in Elmwood. So, I’m never getting out of the woods. I’ll always be in the woods.