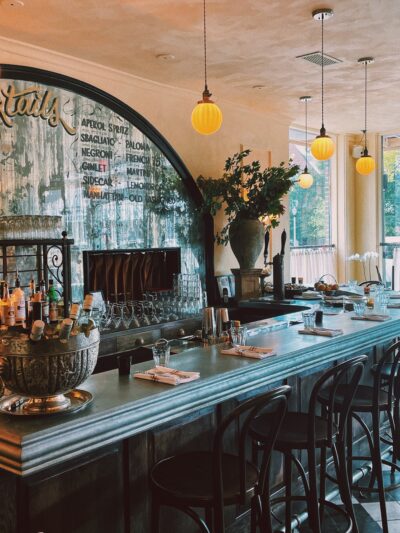 Miller Mobley has been all over the world. As a photographer, he’s met some of Hollywood’s biggest stars including Tom Hanks, Robert DeNiro, George Clooney, and Nicole Kidman. He’s taken portraits of icons Dolly Parton, Anthony Bourdain, and Taylor Swift, and he even shot the cover for Michelle Obama’s memoir “Becoming.”

But after years of living and working in New York, Mobley decided it was time to come home. So four years ago, he packed up his family and made the move back to Birmingham. With the move home, Mobley was inspired to challenge his creativity.

“I’ve always wanted to expand my capabilities and design something that people could experience,” he says. “I think to be honest, I was up for a new challenge. I like to have several projects going on, and despite how many people told me to avoid the restaurant industry, I just couldn’t give it up.”

When choosing a restaurant concept, Mobley says he kept coming back to one question: whether he was creating a restaurant he’d want to visit himself. He decided on a classic pizza joint in his neighborhood of Mountain Brook, and he decided to name it Slim’s.

“Slim’s represents a feeling more than a name,” he says. “To me, Slim’s feels relaxed, easy-going, a place where you call it by its nickname. It’s just that everyday place where you see familiar faces and know that you’ll always be taken care of.” 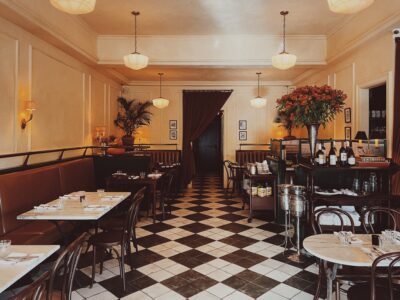 With its black-and-white-checkered tile floor, rich mahogany banquet booths, and warm pendant lighting, the space effortlessly blends understated elegance with nostalgic warmth. It could be a bygone relic of old New York and yet it fits in just as nicely in Crestline Village.

“I wanted Slim’s to have that feeling of ease but done at a high level. I think creating an environment that feels like it’s been around is important as well,” Mobley says. “I can tell you that every single detail, from the font of the menu to the drapery fabric, was planned and thought through. I think that’s the only way to create something special.”

When it came time to plan the menu for the restaurant, Mobley turned to John Rolen, former chef de cuisine at Bottega to take the lead. The two got together in early 2020 to start brainstorming. They decided on a classic menu of pizzas, salads, and Italian appetizers like minestrone soup, meatballs, and panzerotti.

“We always kept saying, let’s do it the classic way, but do it the best way possible with the most premium ingredients,” he says. “For instance, our dough is made with a local flour that’s milled right here in Alabama. We let the dough ferment for more than 72 hours. This process yields a dough that’s incredibly flavorful, has a nice crunch and is a beautiful color.” 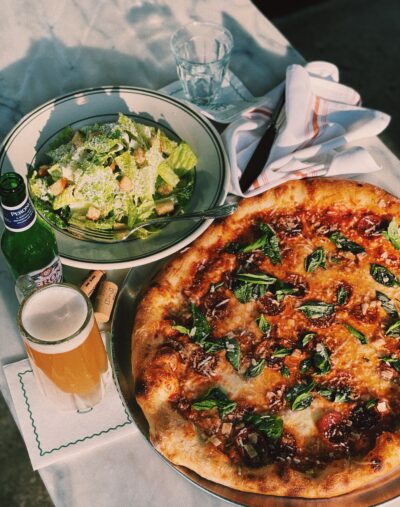 A standout on the menu is the Hot Honey pizza, made with mozzarella, pepperoni, jalapeños, and local Eastaboga honey infused with chili peppers. Other pizzas include the Spicy Pork with copocollo, spicy peppers, red onion, garlic, and parsley; and the Greens with spinach, artichoke, sun-dried tomatoes, feta, and olive oil. The restaurant also serves classic cocktails and specially-made ice cream flavors by Big Spoon Creamery like Stracciatella and tiramisu.

Since opening in September, Slim’s has become a quick favorite. Mobley says he’s been astonished at the reception the restaurant has received and is thankful for all the support.

“We absolutely love Birmingham and believe it has a bright future,” Mobley says.