We’re sharing three soup recipes with you this fall and winter, all inspired by iconic Alabama food and restaurants. The first stop on our tour sits beneath a famous neon sign on Sixth Avenue in Decatur, Alabama.  Known for its hickory smoked ribs and chicken, Big Bob Gibson BBQ has been serving its classic barbecue and sides since 1925 when “Big Bob” Gibson began selling his barbecue from a makeshift stand. The brand now includes two stores in Decatur, a celebrated competitive barbecue team, and its own line of sauces. If you’re looking for the classic Alabama white barbecue sauce, you’ll find it alongside one of the most popular items on the menu: the BBQ stuffed baked potato. 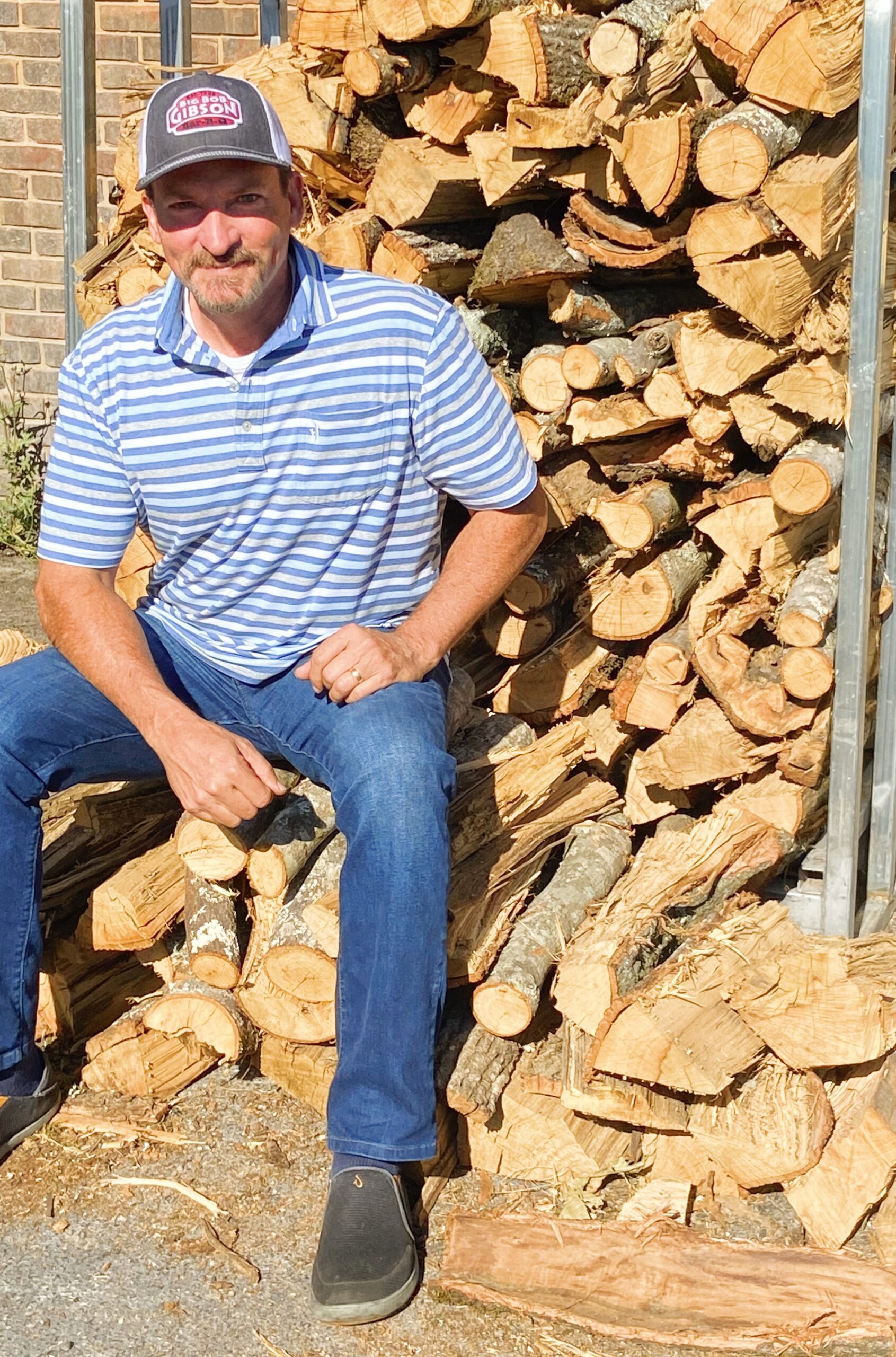 We sat down with Chef/Pitmaster and 4th generation partner, Chris Lilly, to discuss the origin of the Bob Gibson BBQ Potato. “I think it went on the menu in 1991. I had seen it in other places outside Alabama, but nowhere in the state” says the acclaimed pitmaster. “At the time, that particular size of potato, the forty count potato box was plentiful and inexpensive. It was a great use for our chicken. It’s been one of our most popular items since it went on the menu.”

The reason for the popularity is obvious: smoky BBQ chicken or pork piled high inside a giant baked potato stuffed with cheddar, sour cream, bacon and chives. And everyone asks for extra of the world famous Big Bob’s white sauce that comes alongside. You can now find versions of this Big Bob classic on most every barbecue menu throughout Alabama. 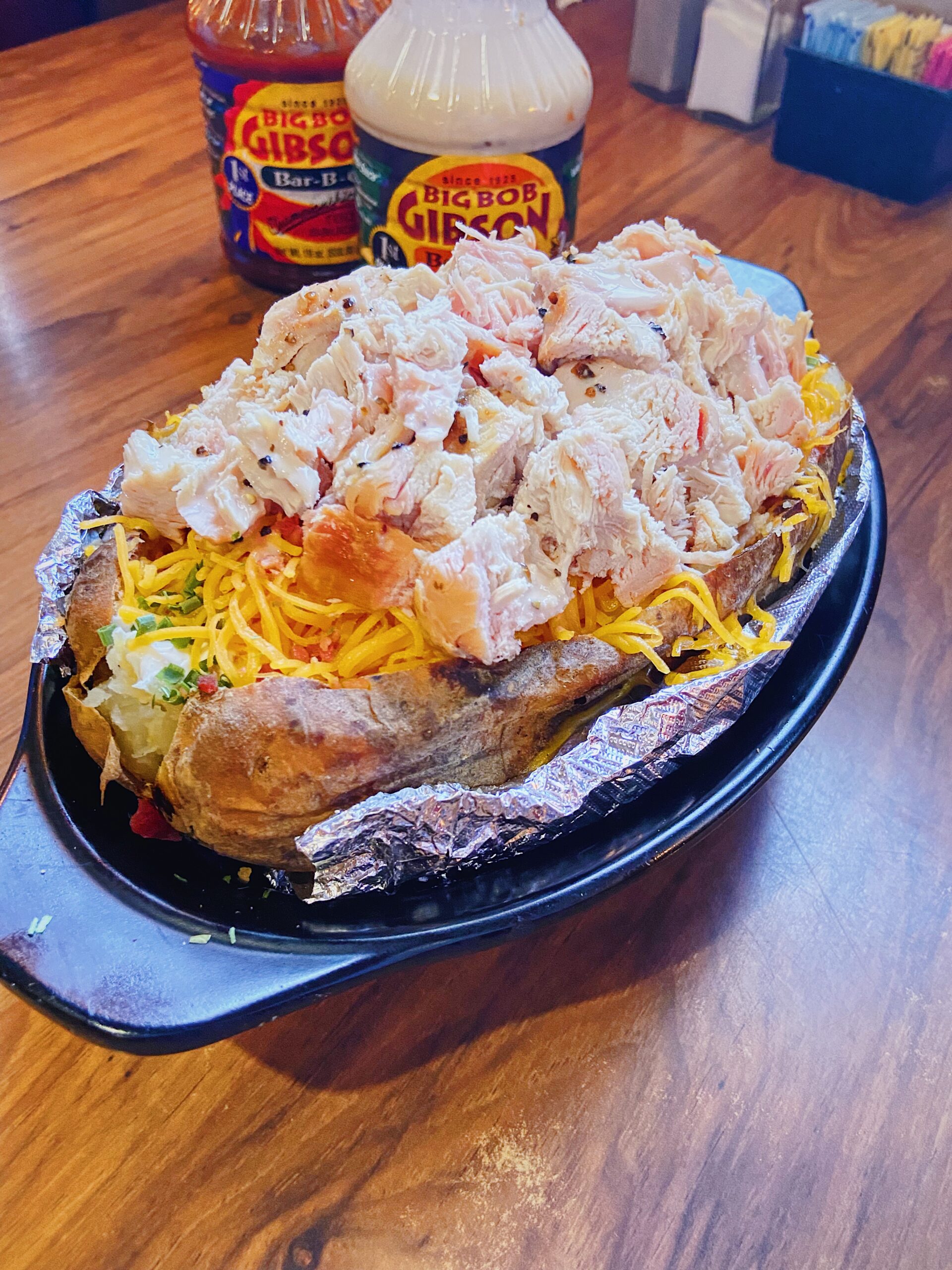 The recipe that follows is inspired by Big Bob’s famous potato. The result is a hearty potato soup that can be prepared in advance and assembled as needed. There are four components: the soup, a smoky chicken potato element for added texture, a creamy topping reminiscent of the famous white sauce, and a crispy garnish made using skin from the potatoes and chicken. You may omit any of the components or make extra of each for use in other applications. The crispy skin garnish would add nice texture to a bruschetta or dip, and the creamy topping pairs surprisingly well with bean dishes and cornbread. If you’re lucky enough to have Big Bob’s smoked chicken on hand for this recipe, the skin from the chicken will provide a nice acid punch to the crispy topping, as the chicken is served coated in the famous white sauce. If you can’t get your hands on that famous Big Bob bird, I recommend using a bit of powdered vinegar to add that sharp flavor, or a few drops of regular white vinegar will do in a pinch. This recipe takes a bit of time and attention, but the smoky, velvety result is well worth the effort. Thanks to Chris Lilly and Big Bob Gibson’s BBQ for keeping Alabama inspired for over fifty years. Be sure to share your soup adventures with us on social media #soulgrownsoupszn.

Serves six, or more depending on portion size

1 large minced shallot (or one-half of a small, sweet onion)

3 cups milk, steeped with a bay leaf and kept warm 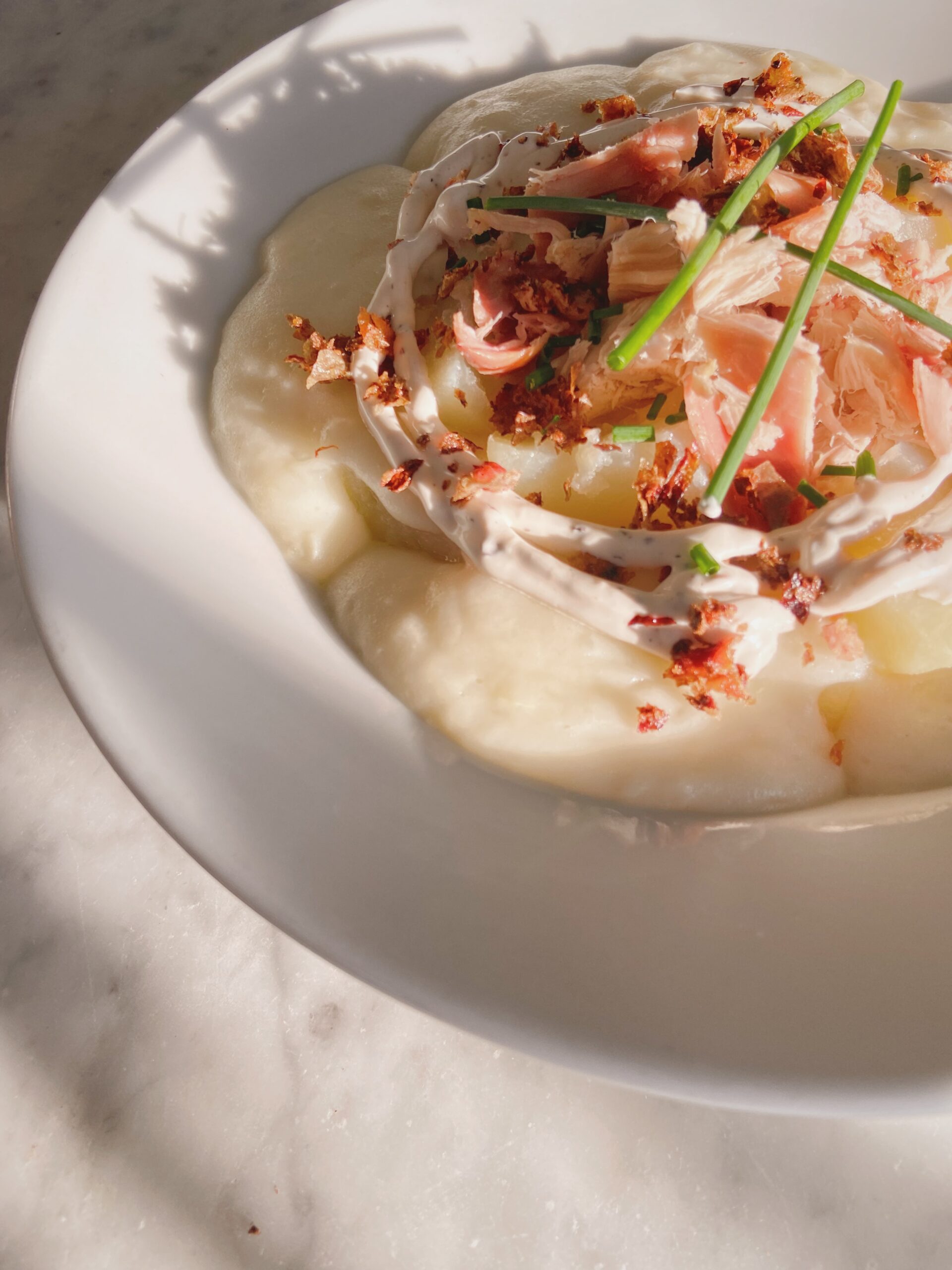 Wash potatoes and place unpeeled potatoes and a bay leaf into a large stockpot filled with cool water and bring to a boil.

Cook potatoes until tender. Remove from the stockpot to a large bowl and cover. Allow potatoes to steam for ten minutes. Completely remove skin and blemishes from the potatoes and reserve potato skins. Dice two of the potatoes into a half inch dice, while leaving the others whole. Place potatoes back into a covered bowl and keep warm.

In a large dutch oven, cook ¼ cup unsalted butter until melted and beginning to foam, but not turning brown. Sprinkle in ¼ cup all-purpose flour and cook the flour in the butter while whisking for five to ten minutes on medium heat until the flour smells nutty but does not take on any brown color. Add the minced shallot and continue to cook until the shallot is soft and transparent. Increase heat to medium high and quickly add one cup of warm chicken stock to the flour, butter and shallot mixture and whisk vigorously until a loose paste forms. Continue whisking and slowly incorporate the remaining stock.  Cook over medium high heat while whisking until slightly thickened. Slowly whisk in the warm milk over medium high heat, again, until the mixture thickens and bubbles slightly. Do not boil. Continue gently cooking until the mixture coats the back of the spoon.  This process will take approximately ten to fifteen minutes. Once it reaches desired consistency, add salt to taste and keep warm on very low heat.

Remove the warm, peeled potatoes from the bowl and make a puree using a ricer or sieve. You may mash the potatoes to simplify this process, but the texture will not be as refined. Season the puree to taste. Slowly incorporate the potato puree into the butter and flour mixture using a whisk over low heat. Be careful in adding too much heat, or the sauce can separate from the puree. Continue this process until the puree is completely incorporated into the sauce. Adjust salt if necessary. You should have a very smooth and creamy soup with a rather thick consistency. You will slowly incorporate the half and half until desired consistency. I prefer this soup rather thin, but you can make the consistency to your liking. If you want a very thick soup, you may omit the half and half completely. If you desire a very velvety texture, you may pass the soup through a sieve as a final step. Cover the soup and keep warm.

Take the reserved chicken skin and potato skins and toss in a bowl, making sure to coat all the potato skins with fat from the chicken skin. Spread the mixture onto a baking sheet lined with parchment paper. If you are using Big Bob Gibson chicken, the skin will already be coated with their famous vinegary white sauce. If you are not able to get Big Bob Gibson chicken, you may add some powdered vinegar to the skin/peel mixture or a few drops of regular vinegar. Powdered vinegar is fun to work with, especially if you’re a fan of salt & vinegar potato chips. The acid from the vinegar in this garnish is perfect to cut the richness of this soup. I recommend you include it if you have time. Roast the skin/peel mixture in a 375 degree oven until crispy. Keep an eye on this, as the potato peels can quickly burn. Stir once or twice to ensure even cooking. Season to taste, finely chop the mixture and set aside.

Into a medium size skillet over medium heat, allow 2 tbsp of butter to melt. Turn the heat to high and add diced onion and cook until browned and fragrant about ten minutes. Season with salt. Pour in 1 cup chicken stock at once and stir to remove all brown bits from the bottom of the skillet. Allow to cook on high until liquid is reduced by half. Turn off heat and slowly incorporate 1 tbsp of room temperature butter. To the skillet, add the chopped chicken and toss to coat in the onion mixture. Gently fold in the diced potatoes. Sprinkle on the shredded cheddar. Cover to keep warm.

Thoroughly combine the mayonnaise and sour cream. Into this, mix the fresh pepper and sugar. Add half and half until you’re happy with the consistency. Place the mixture into a small Ziploc bag and refrigerate until ready to use.

{Putting it All Together}

You’ll  find the Big Bob Gibson brand red bbq sauce, and their famous white sauce at retailers nationwide, or you can order from their website bigbobgibson.com.