The ups and downs early last year for Duane Nutter and the Mobile restaurant he co-owns, Southern National, could be fodder for a caustic comedy routine by the Mad Chef, Nutter’s alter ego back when he moonlighted as a standup comic.

Late February 2020 brought national plaudits when the James Beard Foundation named him a semifinalist for its Best Chef South award. The year before, Southern National was a Beard semifinalist for Outstanding New Restaurant.

But Nutter also blew out a tendon, requiring foot surgery that hobbled the 6-foot 6-inch, 320-pound Louisiana native. Then the pandemic hit. Amid all the buzz prestigious Beard nominations bring, Southern National had to shut down. 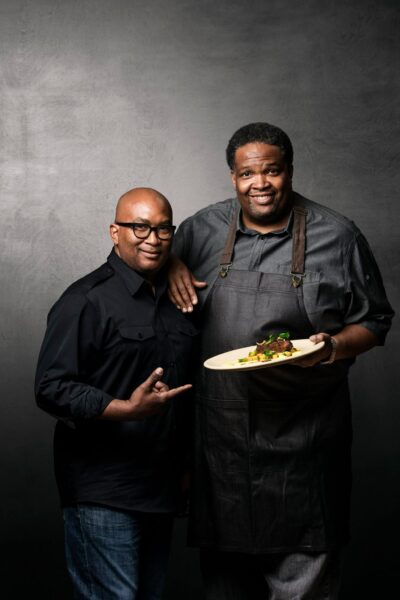 “You get a James Beard nomination and you’re trying to figure out how to walk again,” muses Nutter. “One of the biggest things in your life and you can’t feed nobody.”

Finally, COVID-19 forced cancellation of both the 2020 and 2021 Beard Awards. “All I can say is just my luck,” Nutter says, delivering his punchline with precision. “It always happens to me.”

Southern National, a casual chef-driven restaurant in a historic building in Mobile’s Arts District, reopened in January after a 10-month hiatus. But for now, service is limited to Fridays and Saturdays.

Nutter’s partner is Reginald “Reggie” Washington, a Mobile native whose family roots run deep there. They met as top chefs at One Flew South, the groundbreaking fine-dining restaurant at Hartsfield-Jackson Atlanta International Airport.

Born in Morgan City, Louisiana, and raised in Seattle, Nutter has cooked in south Florida, Kentucky, Georgia, and now Alabama. He traces his culinary roots to his birthplace, but says he puts a little of everywhere he’s gone into his food along with international inspirations.

A current dish, Loaded Sweet Potato, starts with one of Alabama’s top crops (the state ranks fifth nationally in production). It’s baked and loaded with north African flavors from lamb cooked in tomatoes, fennel, cumin, smoked paprika, and garlic. Other elements include curry-spiced yogurt, and garlicky-spicy chimichurri made with mustard greens instead of the usual parsley.

“I try to elevate local cuisine to a global scenario or a contemporary outlook where you see something familiar through a different lens,” he says. 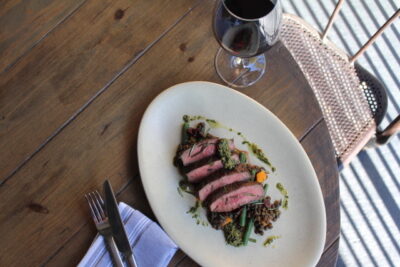 Southern National has abundant outside tables on a patio and its courtyard, nicknamed the Court of Versailles. Nutter describes the interior as old-school New Orleans with modern touches, enlivened by a soundtrack heavy with 1980s-era rock and some hip-hop.

“When the Bee Gees come on the whole dining room goes, ‘I remember that song,’” Nutter says, finishing in a falsetto. “It’s a fun atmosphere.”

The menu includes shareable small plates and traditional large plates. Options are scaled down for now because the kitchen staff is just Nutter and another cook.

When Southern National was fully operating, Nutter’s station was more in the dining room than the kitchen. He says his standup comedy experience makes him comfortable being so center-stage in the restaurant. 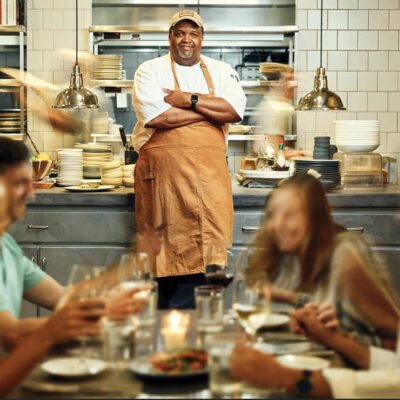 While Southern National was shut down last summer, Nutter and Washington sold barbecue on the patio as Steel Smokin’ BBQ, including ribs and chicken, a dip with cold-smoked catfish, and slow-cooked duck legs for risotto.

“I was doing different things, treating the smoke as an ingredient,” Nutter says. “I wouldn’t say it was classic. It’s more like if a chef was barbecuing.”

The duo originally planned to open a barbecue joint first and follow with Southern National. But after the right space for a fine-dining restaurant appeared, priorities flipped.

It’s anyone’s guess when Southern National will return to normal. Finding quality help may be the driver. “It’s going to be a slow go,” Nutter says. “You have to start all over.”

But for now, Nutter and many loyal diners are happy to have it back in some capacity.