Support Alabama producers with a pasture-raised turkey this Thanksgiving 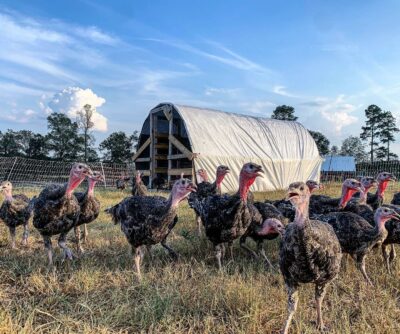 At lucky tables around the state this Thanksgiving, someone is carving up a fresh pasture-raised gobbler grown on an Alabama farm like Heritage Hills Farmstead in Cullman County, Goose Pond Farm in Morgan County, or Bates, the beloved turkey house in Lowndes County.

These don’t look like the grocery-store birds that come from a breed with the apt name “Broad-Breasted White.” These locally-raised free-range turkeys, usually grown from heritage breeds, are naturally proportioned. Think 12–15 pounds versus the 25-pound behemoths in stores.

These birds forage for the bugs and other food that turkeys traditionally eat, instead of the GMO- and chemical-laden feed that conventional farms use to speed and maximize those birds’ growth. Usually raised under organic conditions, these turkeys move around outdoors.

It all makes a huge difference, says Karl Amonite, who started Heritage Hills in 2017 with his wife, Karli.

“Everybody asks the same question—what does it taste like?” he says. “I always tell folks it’s just a more of a turkey flavor. With turkeys you buy from the grocery stores, the fat content isn’t great. They’re just big balls of meat. Ours is a more robust, richer-tasting product. They run around and use their leg muscles, which is where a lot of the flavor is.” 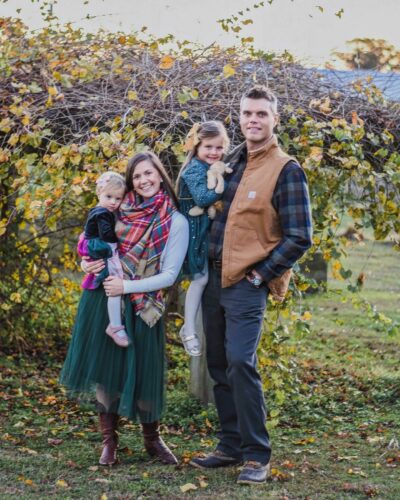 Amonite limits his crop to 100 birds a year. And even though it’s a much larger operation, the only way to buy a fresh Bates turkey to cook for Thanksgiving is directly from its store off Interstate 65 or in Birmingham-area Piggly Wiggly groceries.

In most turkey operations, including Bates, birds are hatched on one farm and the young poults are transferred to another to be raised. But the Amonite family—who live on the 300-acre farm where they also raise, beef, pork, and chicken—cultivate their birds from egg to harvest.

The Amonites time the incubation of their fertilized turkey eggs so they hatch as the weather warms in March. The birds are the most vulnerable at this point to the weather and predators like hawks, coyotes, and owls.

By April, the young turkeys grow their feathers and are ready to move to their new outdoor homes. The birds freely forage in the pasture, sheltering in a chicken-wired enclosed house called a “tractor” that is moved daily to different spots around the field to allow the prior patches to recover and renew while also helping keep the birds healthier.

“Regenerative is the essence of what we do,” Amonite says. “If we provide an environment for these animals that’s thriving—which means the soil conditions are great and it’s a great habitat for bugs—the turkeys benefit because there’s going to be good food for them. It works hand in hand.”

Heritage Hills’ turkeys reach processing weight in 17–25 weeks. But while a commercially-raised tom (male) bird reaches full size of up to 40 pounds in about 18 weeks, the Amonites’ birds finish weighing less than 20 pounds.

Thanksgiving is always a plan-ahead holiday meal, and not just for the days required to safely thaw a frozen store-bought bird. But an even earlier start is needed to score a fresh Alabama pasture-raised turkey.

Heritage Hills starts taking reservations in September. Goose Pond Farms also requires reservations, along with a $25 deposit. Both are sold out for this Thanksgiving (but their online stores are packed with other meats sold as cuts or in bulk), but plan ahead for next year.

The key to bagging one of these birds is to develop and maintain relationships with your local meat grower, through farmers markets or at the farm itself, Amonite says.

Sure, they cost more. But in many Alabama homes, Thanksgiving is the most special meal of the year, worthy of a splurge. They’re a worthwhile investment, not only in your family’s health and enjoyment but also in the local economy.

“We need more people doing the farm-to-table type thing, more farmers doing this, and more people creating relationships with their farmer,” Amonite says. “To me, once you have this you don’t ever want to go back to something that is conventionally raised.”