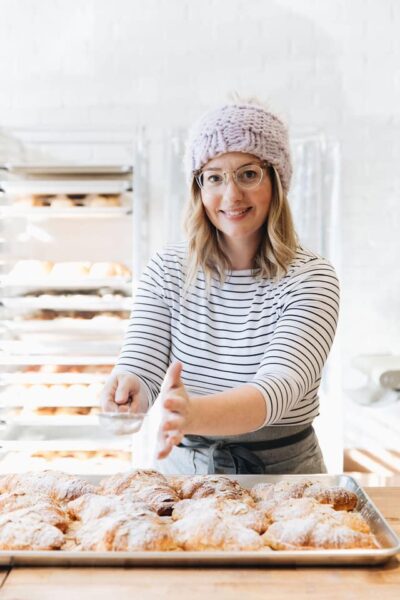 Kristen Hall has built a reputation for her stellar pastries and baked goods, including as the creative force behind Bandit Patisserie in downtown Birmingham and as partner with Chef Victor King in the adjacent restaurant, The Essential.

Bandit also does the baking for The Essential, supplies desserts to downtown’s Helen restaurant, and sells its wares Saturdays at the Market at Pepper Place.

So, it’s shocking when the pastry queen says she doesn’t have a sweet tooth.

“I personally prefer to eat savory pastry,” she says. “That’s why I love French techniques because there’s no real line like ‘that pastry should only be on the dessert menu.’”

Hall breaks down four favorites and how the Bandit crew transforms them into savory and sweet treats.

“The goal is that you’re eating something that feels oddly familiar, but doesn’t look like anything you’ve ever had before,” she says. “We call it modern nostalgia.” 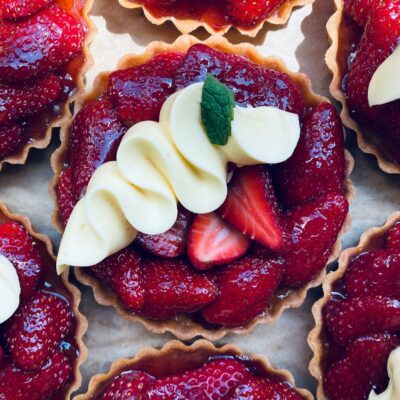 The base is Pâté Sucrée, a buttery sweet pastry dough. “It’s like a shortbread cookie with a little bit of egg added,” Hall says.

Tarts made with locally grown fruit also get a flavor boost from dehydrated fruit that is turned into powder.

Lemon Meringue Tart, now on Helen’s dessert menu, has a creamy filling and Swiss meringue, which is cooked and then whipped. The topping is decorated in a wavy pattern that has become Bandit’s signature look.

In another variation, almond-based cake batter is baked into the tart crust. “You get these layers of textures,” Hall says. “There’s a very crisp shell, then you have the soft frangipane almond cake, and super-juicy berries on top of that. We pipe vanilla crème mousseline, which is pastry crème with added butter, on top of that.” 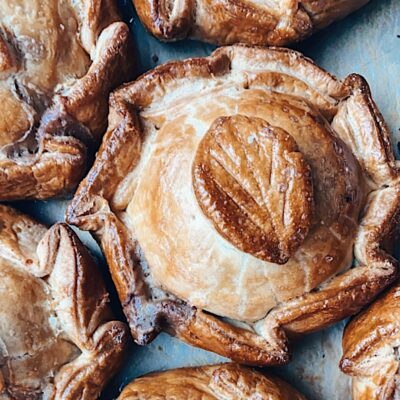 The base is Pâté Brisse, a classic French pastry crust. Savory versions begin with a layer of ricotta and egg with fresh herbs in the shell. This spring they were stacked with asparagus and foraged Alabama mushrooms; slow-roasted tomatoes rule during summer.

Fruit for sweet galettes move from spring strawberries to summertime peaches and blueberries, and fall apples and pears. One of Hall’s favorite galette fillings is blueberries with torn fresh basil, brightened with lemon.

“It’s like the fanciest version of a frozen hot pocket,” Hall says. “When the guest cuts it, mushrooms and sauce just pour out onto the plate.” 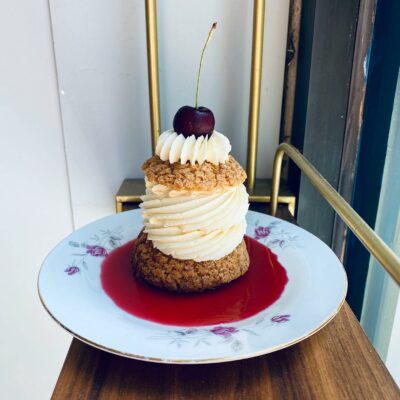 A cherry and cream Paris-Brest (The Essential/Facebook)

Although cream fillings are common, fruit, chocolate-hazelnut spreads, and even savory additions demonstrate the pastry’s versatility. An early favorite at The Essential was an éclair encasing chicken-liver mousse and covered in roasted onion or carrot jam.

Apple pie inspires a fall version of a Paris-Brest, with apples cooked in brown butter, crisp dehydrated apple slices with cinnamon, and vanilla bean creme mousseline, with caramelized apples baked into the dough. 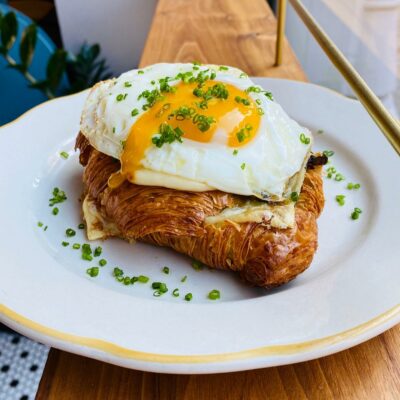 “The croissant is the workhorse of our bakery,” Hall says. “It’s like a blank canvas. The possibilities for creativity are endless.”

Bandit cuts and forms its croissant dough into different shapes. Triangles are rolled into the traditional layered croissant. Rectangles or strips are wrapped around chocolate or twisted into double helixes for fruits like figs. Diamond-shaped croissants, which have deeper wells for fillings, usually are savory.

Mushroom Madame, a, Essential brunch favorite, is a split butter croissant topped with foraged mushrooms, bathed in Mornay, baked, and topped with a sunny-side-up egg.

On day three, a block of hardened butter is placed between two dough sheets, rolled thin to meld the ingredients, and then folded to help create layers. This is repeated twice more—with the dough chilled between. Finally, it’s cut, formed, filled if required, and baked.

“Once you get the technique down, you can do anything you want,” Hall says. “Croissant dough is magical.”