The 5 best scenic fall drives to take in Alabama 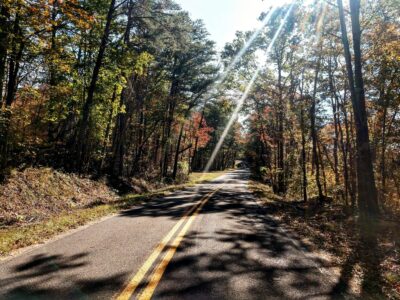 There’s something about cruising down a backroad with the windows rolled down and your favorite song turned up. As the world blurs by you in a rush of color, you can exhale and let go of the week’s worries. When the weather begins to cool and the leaves begin to turn, it’s the beginning of fall drive season. Alabama is blessed with dozens of gorgeous backroads and stunning scenic byways that show off the state’s beauty. And they’re best visited in that sweet spot when the leaves have begun lighting up in brilliant crimson, gold, and orange and have only just begun dusting the ground. Ready for a weekend adventure? Here are some great places to start.

This 8,000-year-old path played an important role in the American South’s history as a major thoroughfare for Native Americans and European settlers, including traders, trappers, and missionaries in the late 1700s and early 1800s. The parkway runs from North Tennessee, just below Nashville, through the northwest corner of Alabama, and then all the way across the state of Mississippi to the Louisiana border. The Alabama portion of the 444-mile drive goes 33 miles through cotton fields and plenty of fall foliage, as well as over the Tennessee River. If you want to stretch your legs, Natchez is home to 60 miles of National Scenic Trail over 28 different trails.

At approximately 80 miles, this drive is the perfect distance to cover in a day, with a few stops along the way. Located in the northeastern part of the state, the Appalachian Highland Scenic Byway cuts through some of the most scenic backdrops in Alabama, including the rolling foothills of the Appalachian Mountains and the lush green vegetation that the nation’s most biodiverse state is known for. In the fall, all the green amounts to some of the most gorgeous autumn foliage you can find anywhere. The byway starts near Heflin and travels up Alabama Highway 9, takes a turn to follow U.S. Highway 411, then Alabama Highway 273, and finally Alabama Highway 35 up to Fort Payne. Points of interest along the path include the Talladega National Forest, Chief Ladiga Trail, and Little River Canyon National Preserve, and more.

Another northeast Alabama stunner, the Lookout Mountain Parkway Scenic Byway was named one of America’s Best Scenic Drives by Reader’s Digest. Home to farms and woodlands, the 93-mile byway takes you past Little River Canyon National Preserve, known as the Grand Canyon of the East, as well as numerous caves and subterranean wonders to explore. Along this drive, you’ll have easy access to rivers, lakes, gorges, waterfalls, wildlife, and more. If you want to make this a weekend trip, consider stopping for a night in Fort Payne, Leesburg, Collinsville, or Mentone.

Named for the rich black soil that grew superior cotton during the 19th century, Alabama’s Black Belt region is filled with so much of our state’s history. This heritage trails bisects Alabama horizontally through our capital of Montgomery. The land around 210-mile east-west trail was formed by the meandering waters of the Black Warrior, Tombigbee, and Alabama rivers, so the flora and fauna are especially rich here. Points of interest along the trail include the Edmund Pettus Bridge in Selma, Gee’s Bend and its famous quilters, Antebellum architecture in Demopolis and Greensboro, and the Coleman Center for Arts and Culture in York, where you can learn all about this region’s history.

This quick 54-mile drive packs a lot of beauty into a short distance. The trail in North Alabama runs from Moulton to Jasper through the central portion of the William B. Bankhead National Forest. This hotbed for hiking and waterfalls is especially beautiful in the fall once forest begins its annual transformation and color-changing act. At the heart of the forest is the 25,000-acre Sipsey Wilderness, which is one of the state’s most beautiful natural area. Be sure to check a few of the area’s waterfalls off your list during the drive. Kinlock and Parker Falls are good places to start.