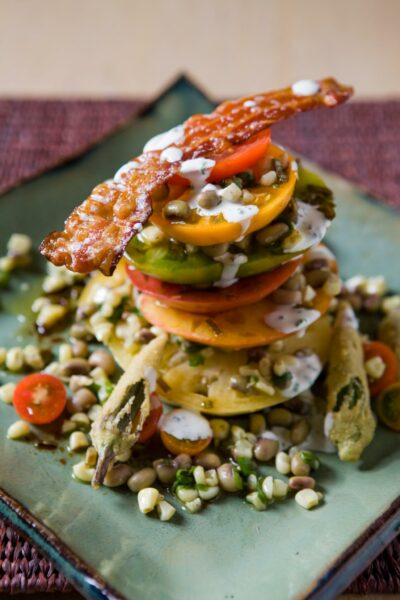 The return this week of the signature tomato salad at Hot and Hot Fish Club restaurant in Birmingham is as welcome as a sunny spring day. It’s a celebration of what’s good now, a promise of even better delights in the months to come.

Hot and Hot Tomato Salad has been a seasonal sensation each year since Chris and Idie Hastings opened their nationally-acclaimed restaurant in 1995. Complexly composed and artistically appealing, it showcases some of Alabama’s tastiest warm-weather produce – tomatoes, okra, field peas and corn.

The dish premieres to great fanfare in late April or early May, just as the first heirloom tomatoes ripen, and remains on the menu until Alabama’s tomato crops wind down, usually in late September.

Its fan base is large and ravenous. After shutting down last spring due to the pandemic, the Hastings partially re-opened Hot and Hot that May, just to fill to-go orders of the city’s beloved tomato salad.

The veteran restauranteur and chef knows the market too well to even think about approaching summer without Hot and Hot Tomato Salad on the menu. “There would be anarchy if that happened,” Hastings once told me. “Blood in the streets.”

A deconstruction of Southern succotash, the dish was inspired by Chef Hastings’ childhood memories of the bounty of fresh food his family enjoyed while spending summers in coastal South Carolina.

Hot and Hot Tomato salad emerges from its hibernation when the first heirloom tomatoes are harvested in South Florida. Alabama tomatoes take over in June, when they start fully ripening. 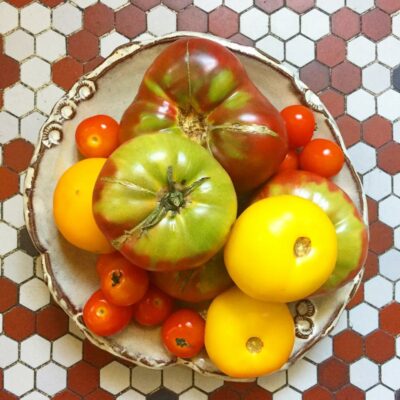 Fresh field peas are cooked with ham hock, onion, and thyme. Corn is sliced from the cob and simmered until tender. Whole pods of baby okra are soaked in buttermilk, rolled in a seasoned mixture including cornmeal and wheat flour, and deep-fried.

For each order a cook stacks the tomato slices, scatters the cherry tomatoes halves on a custom handmade pottery plate, and smothers them with cooked field peas and corn. Fried okra pods are arranged beside the tomato stack, which is then topped with a crisp slice of bacon. Spoonfuls of chive dressing and thin ribbons of fresh basil provide the finishing touches.

Chris Hastings is one of the state’s most-lauded and best-known chefs, consistently winning praise from state, regional, and national food publications. In May 2012 the prestigious James Beard Foundation named him Best Chef South, his fourth year as a finalist.

And a few months earlier, Hot and Hot regulars joined a national audience to watch Hastings and a hand-picked team beat celebrity chef Bobby Flay in an episode of the “Iron Chef America” televised cooking competition.

After nearly 25 years in Hot and Hot’s original location on 11th Court South, the Hastings moved the restaurant in January 2020 to the Martin Biscuit Building in the Pepper Place district, not far from the couple’s other eatery, OvenBird. Both recently reopened to indoor dining, but are limited for now to 50 percent capacity.

But as spring rolls on into summer, you can bet each table will have Hot and Hot Tomato Salad.