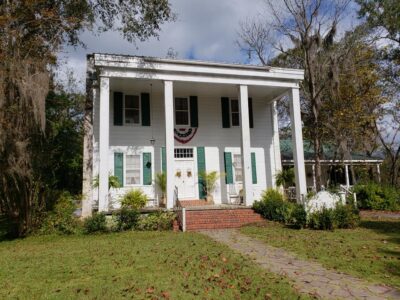 With any old house, you can expect a skeleton or two in the closet. Some even are haunted by resident spirits. But the 195-year-old mansion that houses Gaines Ridge Dinner Club in Camden, Alabama is one of the few haunted houses where you can order a shrimp cocktail and 16-ounce ribeye to go with the ghost stories.

Unfortunately—or perhaps fortunately if you’re ghost-averse—the restaurant will be closed for Halloween, All Saints Day and Dia de los Muertos, the days from October 31 through November 2 when people believe the veil between the living and dead gets pulled back a bit.

This year those multi-cultural observances are Monday through Wednesday; Gaines Ridge is open for dinner Thursdays through Saturdays.

Built as a residence in 1827 and converted into a dining and catering operation in 1985, Gaines Ridge Dinner Club has been dubbed the most haunted restaurant in Alabama.

Co-founder Betty Gaines Kennedy has described hearing a voice call out her name while working there one night; the cook (and the only living person there at the time) says she heard it too but the voice wasn’t hers’, Kennedy recounts in a video for an Alabama’s Ghost Trail tourism promotion.

“It’s not a ghost story,” Kennedy says in the video. “It’s a ghost truth.”

People say they’ve seen a female apparition floating outside the windows at night. Others have spotted what appears to be a spindly spirit that some say is an early resident, War of 1812 vet and Methodist circuit preacher Ebeneezer Hearn.

In Gaines Ridge’s early days, Kennedy and her sister, restaurant co-founder Haden Gaines Marsh, regularly smelled pipe smoke upstairs when no one had been there.

Then there’s the time diners and a server heard what sounded like someone falling in the bathroom—hard enough to make the door shake—only to discover that no one was inside and nothing had fallen off the walls.

Frequent sounds of a baby crying may or may not be connected to the tragic crib death of a Gaines ancestor in the historic house, which has been in the family since the 1890s.

Oh yeah, and the state tourism department says the restaurant’s signature dessert is to die for. The Black Bottom Pie at Gaines Ridge is on its list of “100 Dishes to Eat in Alabama Before You Die.”

Diners are partial to the restaurant’s key lime pie and its steaks, which also include a half-pound ribeye. But seafood dominates the menu—boiled, fried or skewered shrimp; broiled or blackened snapper; fried crab claws; seafood gumbo or bisque; fried catfish; and a shellfish casserole.

Gaines Ridge is located just outside Camden, not far from where the Alabama River snakes through the rich soil of the Black Belt. Only 10,000 people live nearby in Wilcox County (not including ghosts); Gaines Ridge has found success for nearly four decades by catering to tourists as well as locals.

Generations of the Gaines family trace their roots in the area to the earliest days of European settlement in Alabama. Betty, Haden and a third sister, Mary, grew up in the two-story home. As adults, Betty and Haden renovated the house before opening Gaines Ridge Dinner Club there in October 1985.

But the ghostly legends linger. “Anything that happens here that can’t be explained, we blame the ghost,” Kennedy says in the ghost-trail video. “I think there’s several around.”

Maybe their spirits would finally settle if those ghosts could eat just a slice of that Black Bottom Pie.